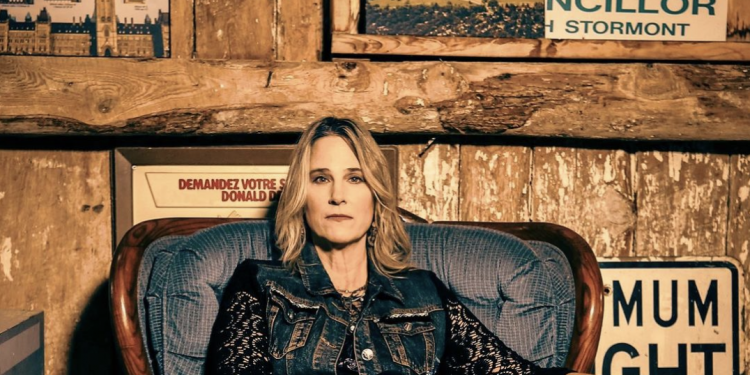 For the first time ever, I made exactly the record I intended to make, for good or bad,” said Lynne Hanson.

By the reactions so far to Lynne Hanson’s new album, Ice Cream In November, it’s good. Very good. Lynne’s eighth solo release is a collaboration with co-producer Blair Michael Hogan. The two of them had a lot of time to work on the nine songs because of the pandemic. They then set their minds to work on recording the songs.

“I had never recorded at home before. I wasn’t even set up for it,” said Lynne.

“I can be so critical of a vocal. I would redo it or try different mics. But at some point, you just have to go with one of the tracks,” Lynne told me.

Lynne’s last album, Just Words, was released in 2020. It was her first project featuring her solo compositions exclusively after years of occasional collaborations with other songwriters. Co-writing with Blair Michael Hogan was an entirely different situation from her other experiences.

“He doesn’t write lyrics and he doesn’t sing,” Lynne explained. “It was a very interesting writing exercise to work with someone who wasn’t sitting in the room, bouncing ideas off them,” she said.

Once the framework of the songs was achieved, Lynne and Blair spent three months working on the sonic textures the songs would sit in.

“It’s almost like Blair became an extension of myself in terms of developing the guitar parts,” said Lynne. “It’s probably the most input I’ve had with a session player. Blair’s a real tone master, so it was the synergy of two creative people being in the same room, not having a limit to the amount of time you can use to explore these ideas,” she said.

Ice Cream In November was written in isolation during the pandemic and without “road-testing” the songs before a live audience. It wasn’t until the album was finished and mastered that a thought came to Lynne, “Wow, I wonder if my existing fan base is going to find this a little bit weird?”

Apart from her solo albums and one duo release with Lynn Miles, Heartbreak Song For The Radio, some will be interested to know Lynne has also published two books of poetry.

“Poetry is challenging because there’s no song structure, not necessarily the same rhyming scheme, and you don’t have melody or chord progressions to hide behind,” she said. “I find poetry is sort of like a stretch for me. It’s the highest level on the writers’ pyramid, so for me writing poetry is an exercise in trying to be a better writer,” she explained.

Another challenge for Lynne was writing her first song in French, “Le Bon Moment.”

I did that with MJ Dandeneau right before the pandemic,” Lynne explained. “That was a lot of fun. I find it challenging to write in French because there’s this lilt you get with the French language. All the normal things I do in terms of songwriting don’t really work in French. It was a lot of fun though and I’m looking forward to performing it live in France in May.”

For more on Lynne Hanson and Ice Cream In November, go to lynnehanson.com.