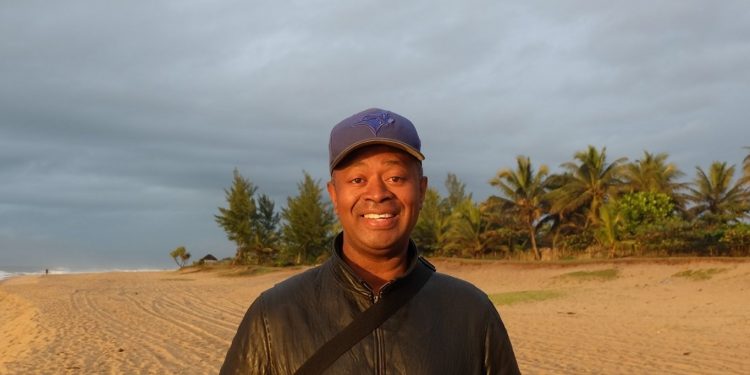 Donné Roberts constantly celebrates his accomplishments as a singer-songwriter by paying tribute to the people and places he knew growing up.

He was born in Madagascar and was raised and educated in Russia before moving to Canada.

Coming from a big family with many siblings allowed him to develop a connection with music early in his childhood.

He started in a family band where he played bass guitar.

Now living in Toronto, he stays in touch with his roots through music.

He started collaborating with other musicians from countries around the world. He participated in Juno Award-winning projects African Guitar Summit and Okavango African Orchestra.

He is proud of what he has accomplished so far in his career.

And now, his album Oya has earned a 2022 Juno Award nomination in the category Global Music Album of the Year. It is especially meaningful as it’s his first solo project to be so nominated, an accomplishment he had dreamed of since the beginning.

“This one is my solo album, which is under my name, Donné Roberts. So that definitely makes it more special,” he said.

Donné’s connection to world music has allowed him to create songs in various languages including Malagasy, Russian, English, and French. Oya represents Afrobeat in Madagascar music. During rap competitions in the village, the crowd cheers by chanting “Oya.” It gives the rappers’ background music while they’re competing. Although he has seen competitions before, he didn’t notice the chanting until moving to Toronto. Now he appreciates more of the culture in one of the places he calls home.

His album is a modern twist on Afrobeat music with some jazz elements as well.

“We don’t have to do mainstream music to be recognized,” he said. “I think that’s a big deal. You can be from Madagascar, playing Madagascar music in Canada, and still, [the people back home] they would recognize your music, and they would appreciate it.”

His favourite song on the album is “Seheno.” Written and sung in Malagasy, it is a tribute to the Italian pop songs he would listen to with his brother as a teenager. He wrote it for his brother, and it is a reminder of the bond they shared while falling in love with the same music. The song is special because it brings back childhood memories. It also reminds him of nature, which he doesn’t get enough of in the big city of Toronto. The song helps him take a break from being in the busy city, slow down, and enjoy the simple moments in life.

“If I miss the nature and I want to go out of the city, I relax or take a little break out in the nature, like the river and mountains and the trees,” he said. “Living in a big city could be chaotic, is always in a rush.”

alt-country rockers, Foreman and Co will get ...