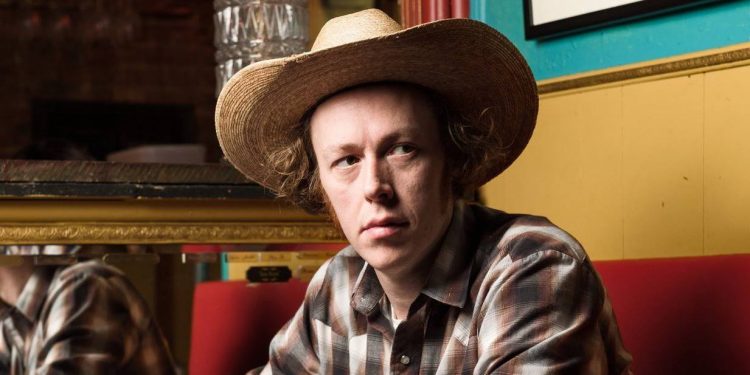 Until recently, little was known about the singer who called himself “Hezekiah Fortescue Procter.” From 1925, until his mysterious disappearance in 1929, Procter recorded some of the earliest examples of country, jazz, and old-time music while also setting the blueprint for the modern country star. Procter was cantankerous, talented, self-destructive—and perhaps a murderer.

Andrew McClelland began performing in Montreal as Li’l Andy in 2003. Since that time, he has developed a reputation for producing grandiose, one-of-a-kind concerts in the city’s most prestigious concert halls. Most recently, he performed at the Pop Montreal Festival. The Montreal Museum of Contemporary Art handpicked him to lead 5 Albums/ 5 Concerts. This multi-part concert series sold out within a day of being announced and he played with some of Quebec’s most revered music stars. In 2013, he conceived and mounted Li’l Andy 3D, the world’s first simultaneous live concert and 3D movie, in collaboration with the NFB (National Film Board).

Known for his witty songwriting and dark country-noir sound, Andy is a two-time award winner at GAMIQ (Quebec Independent Music Awards). His previous album, All The Love Songs Lied To Us, released in September 2019, was named one of the best albums of the year by Said the Gramophone and Maclean’s. More info about The Complete Recordings of Hezekiah Procter is available at lilandy.net and Li’l Andy’s Bandcamp page. 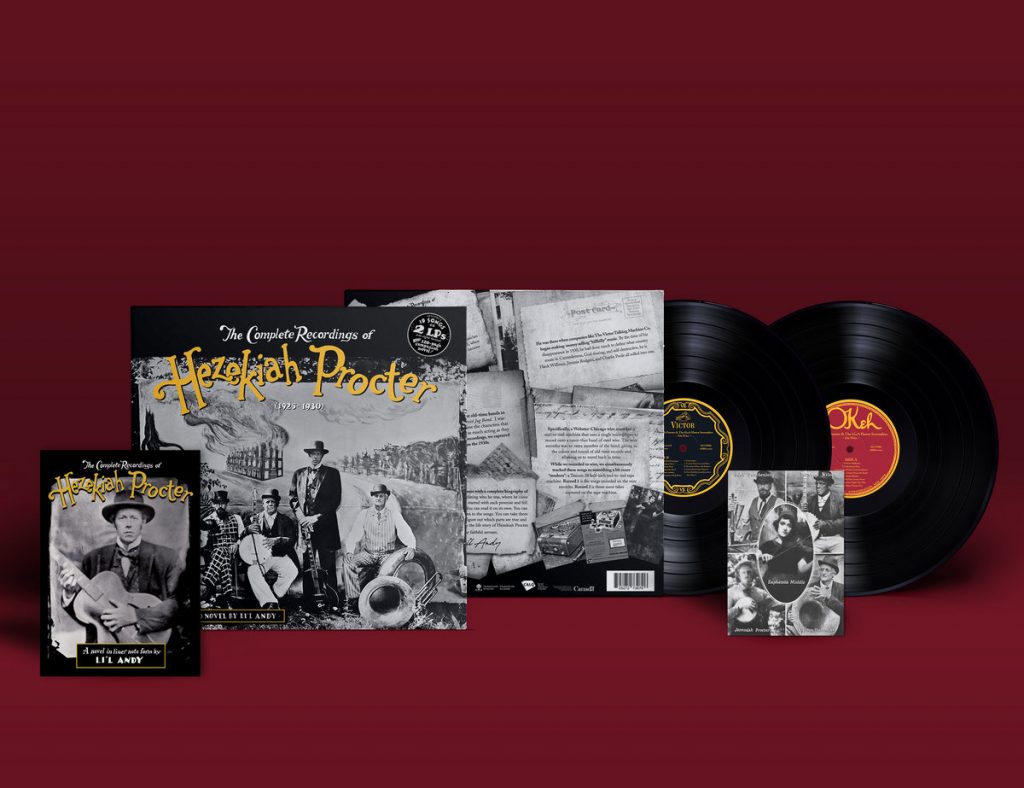 Who is Hezekiah Procter?

He’s a fictional country musician that formed in my head over the past 10 years. As soon as I started playing guitar when I was 11, I loved listening to Hank Williams, Jimmie Rodgers and Charlie Poole. I got sucked in by the music, their stories, and the mythologies that built up around them. What made them burn out and fade away so young, so sadly, so mysteriously?

That made me wonder: Could you create some kind of über-roots musician, a self-destructive genius who makes a handful of great recordings, then disappears from history so that collectors and archivists obsess about him? That’s who Hezekiah is. He’s a medicine show performer from the 1920s, one of the singers who was there when phonograph companies began recording “hillbilly” music, a folk hero, a Marxist who writes union ballads for striking labourers. He’s also maybe a sell-out, and a murderer.

Once he formed in my imagination, I began to write songs as him. And while I wrote these 30 or so songs, I realized I had to write his life story to understand him more. So I wrote a biography of him, which took the form of fake liner notes to a box set of his collected recordings. That grew into 150 pages. When it came time to record Hezekiah’s songs, I realized I needed to record them on equipment from the 1920s or 30s. I hate modern, digital recording anyway — it’s too clean and transparent — but to use it on this project in particular would’ve ruined it. So we managed to record on a Webster-Chicago wire recorder made in 1937. And while recording, I began acting as Hezekiah, developing his vocal mannerisms and archaic guitar style.

So now, when I perform live, I am him. In my singing, the banter between songs, everything. It’s old-time country performance art. It’s extreme vintage recording. It’s experimental fiction.

Did you conceive this project as being bigger than a mere album right from the start?

From the start, I wanted this project to be a compilation of the complete recordings of an obscure country, folk, or “hillbilly” singer. The kind of retrospective box set or two-disc set that comes with a thick booklet recounting the singer’s career with archival photos, similar to Bear Family Records or Smithsonian Folkways put out.

But when COVID-19 hit, I suddenly had a lot of time to sit in my studio and write. So the “liner notes” became a novel. And the songs became a part of Hezekiah’s life story. And writing songs as Hezekiah became a madcap quest to find functioning recording gear from the 20s or 30s so we could make an album that sounded like old 78rpm records.

What were some of the challenges — and rewards — of putting it all together?

Well, finding recording equipment from the 20s or 30s that still worked was a challenge! And finding anyone who knew how to operate it. I talked with archivists at the Smithsonian in New York. I wrote to 78rpm record enthusiasts in England and Germany who still cut to wax or lacquer. But… nothing I heard sounded really good. I think that recording on that gear is a lost art, sadly.

At practice one day, I was complaining about it to my drummer, Ben Caissie. And he said, “You should try a wire recorder!” I hadn’t heard of a wire recorder, but Ben explained: “It’s this machine they made in the 30s. It records on a reel-to-reel like a tape machine, but instead of tape spinning by, it’s this razor-thin band of steel wire. It’s steel, so it doesn’t degrade and become unplayable over time like tape.”

That sounded promising. But we didn’t have one. Ben set up a Kijiji alert for “wire recorder” and after about a year, he saw one listed for sale in Quebec City. That night he hops in his car, drives to the address, and arrives at this huge cathedral. The guy selling it was the caretaker of a Catholic church and they’d used the wire recorder to record sermons in the 30s and 40s.

Ben bought their 1937 Webster-Chicago wire recorder, and when he was leaving, the caretaker said: “Here, you might as well take these too!” and gave him dozens of wire reels to record on. So that’s what we recorded the takes on: we taped over hours of sermons to make this album. Between takes, we’d listen to the voice of a Roman Catholic priest sermonizing in French as we cued up for the next song.

The other challenge was writing songs and a novel at the same time. It made the revision process dizzying, a minefield. Every time I changed a line in a song, I’d have to go back to the novel and change something in the text. Every time I changed something about Hezekiah’s character or backstory, I’d have to think: “Okay, does that make any of the references or lyrics in the songs ring false?” It was a constant back-and-forth for months and months.

The most rewarding thing about this album was realizing that I can write songs as another person, from a point of view other than my own. I started writing songs when I was 11, and I quickly got bored with the idea that a singer-songwriter has to pour out their “deepest, darkest feelings” in their songs and write heart-on-sleeve lyrics, as people say.

Getting away from that cult of authenticity, which we fetishize in folk music, has been liberating. Particularly today, when “authenticity” is just another marketing strategy. We shouldn’t be asking: “Is this artist the ‘real deal’? Do they have the correct life story and background to play this music?” We should be asking: “Are the songs good?”

What did you have to do to put yourself in the mindset of an artist working a century ago?

I read and read and read. And I listened and listened and listened. Hezekiah learned about show business from the medicine shows, so I spent a lot of time reading about the patent medicine salesman who toured North America between the wars. He also became a folk singer of union ballads at rallies. I read up about the Gastonia, North Carolina strike of 1929 – the only strike in U.S history that was started by the United States Communist Party. I scoured newspapers from the South that covered it at the time. I spent many days at the McGill University library pretending I was a student, getting the staff to help me find rare books and periodicals.

It was a good way to escape from the horror of the pandemic. I had a foothold in a different moment of history and just lived there half the time. I’ve always been a collector of music from the ‘20s, ‘30s, and ‘40s, but I really went off the deep end when I started researching. My dad inherited a gramophone from the family farm — the kind you wind up and has a cabinet for storing records. When we were kids, my brother, sister, and I would wind it up and play 78s, like “Turkey in the Straw” or “Hallelujah, I’m a Bum”.

But the record collection that came with it was pretty thin—mostly fiddle tunes or hymns—exactly the kinds of records you’d imagine Canadian Protestant farmers would buy during the Depression. During the research for this project, I started buying stacks of 78s on eBay. Good records, like Bob Wills, The Blue Sky Boys, or Louis Jordan. All the serious 78 collectors told me: “You’re crazy! You’re going to ruin those 78s by playing them with those old needles on that thing!”

But I didn’t care. I’m much more interested in understanding the experience people had when they put on a record in 1928 than in keeping my records in mint condition. What did playing a recording feel like? How did, say, Gene Autry sound coming out of the horn of a gramophone? When you played these recordings on the machines they were intended for and the music rattled the wood of those old phonograph players.

What do you think makes music in general from that era still relevant today?

Music from that era feels relevant today because it feels real in a way modern recordings don’t. We put on a record by Charley Patton or The Carter Family and we think, “Yeah, this is authentic. These singers are the ‘real deal.’” But “authentic” or “the real deal” are dangerous concepts. A lot of the time, singers from the 20s or 30s, were very commercially-minded.

When A.P. Carter and Sara Carter got divorced, they hid it from their fans and kept on playing together pretending they were still a couple—because they knew their fans wanted an upright, Christian family band. That was their image. Even the Grand Ole Opry, which a lot of people say is the last bastion of “authentic” country music, was started by an insurance company that wanted to sell more policies to the rural population.

That’s what The Complete Recordings of Hezekiah Procter are all about. Saying, “Is this idea of authenticity getting us anywhere closer to making good music, good art?” Or is it possible to make good art from a point-of-view that’s completely fabricated and imagined? As a guy from Montreal in 2022 imagining the life of a string band musician from 1920?