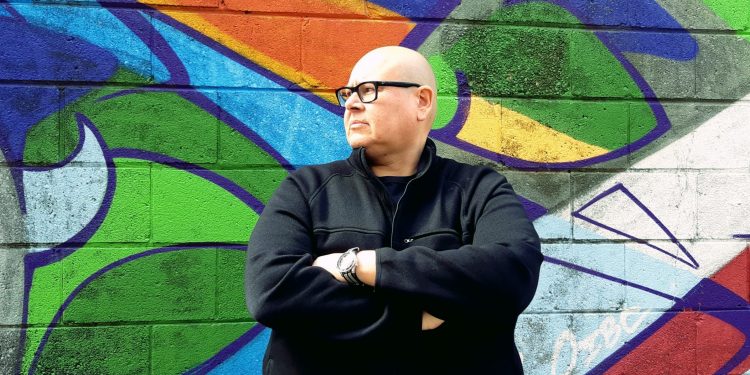 NADJIWAN’s new single “Land Of Skoden,” is out April 29, 2022, on Heading North Music. The Toronto-based singer-songwriter, multi-instrumentalist, and producer is also known as Marc Meriläinen.

The term “skoden” was pretty much unknown in Canada—at least non-Indigenous Canada—until 2018 when it made headlines in Sudbury, Ontario. “SKODEN” was painted on the city’s old water tower, prompting police and residents to reportedly act “alarmed,” as they did not know what it meant.

So what does “skoden” mean? According to Marc, “To make a long story short, many Indigenous folks use it as a precursor or colloquialism for ‘let’s go then.’ The typical response to ‘skoden’ would be ‘stoodis,’ or ‘let’s do this.’ Many residents in Sudbury and the rest of Canada didn’t know this and assumed it was something offensive or even threatening. But in reality, it’s just a playful saying.”

Although born in Thunder Bay, Ontario, Meriläinen also has family in Sudbury and Atikameksheng Anishnawbek, formerly known as the Whitefish Lake First Nation. It is an Ojibway First Nation reserve located on the shores of Whitefish Lake, 20 km southwest of Sudbury. As he describes in the song, when driving there from Toronto, it’s become a tradition for Marc to tell his family that they are travelling to the “Land of Skoden.”

“The song is meant to be one of those classic summer road trip tunes that you’d hear on the radio while driving to your favourite summer destination,” Meriläinen says.

“Land Of Skoden” follows the 2021 NADJIWAN concept album Star Nation, which Exclaim! describes as “deeply nostalgic in its prog-rock leanings, but also so refreshingly new by virtue of Meriläinen’s beautiful, vast tales and keen eye.”

Transforming the sound and image of Indigenous music has been one of Marc Meriläinen’s goals from the beginning. His prodigious output has been recognized in many corners, including the Canadian Aboriginal Music Awards, the Native American Music Awards, the Indigenous Music Awards, and Toronto’s Dora Mavor Moore Awards for the Performing Arts. He also received invitations to perform at the 2010 Vancouver Winter Olympics and the 2015 Pan-Am Games in Toronto.

NADJIWAN’s “Land Of Skoden” is available on all digital platforms, and from Heading North Music.

Check out this new music from Pharis ...