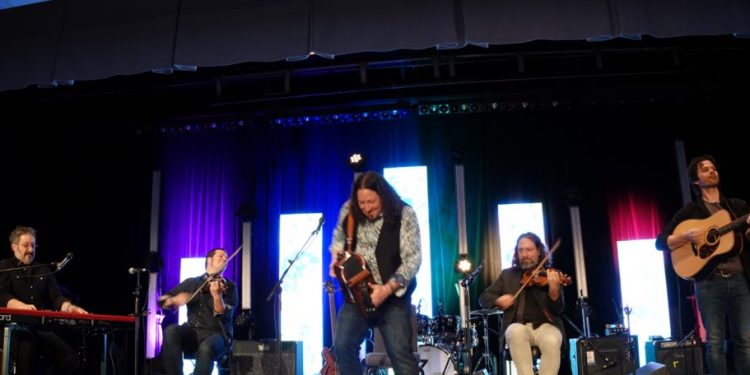 In early March, Le Vent du Nord released a new album called 20 Printemps, a title that signifies rebirth and rejuvenation, appropriate for a group that has over two decades expanded and developed its musical vision – a vision dedicated to exploring the folk music of French-speaking Canada.

Since its inception in 2002, Le Vent du Nord has won a Grand Prix du Disque Charles Cros, two Junos, a Felix, a Canadian Folk Music Award, and an “Artist of the Year” citation at the Folk Alliance International annual gala. The group has toured extensively and collaborated with numerous international artists including the Chieftains, Vasen, Dervish, Breabach, Julie Fowlis, and several symphony orchestras all over Europe and America.

This new album contains a dozen tracks, which are a mix of traditional songs sourced from the national archives and original compositions, on which, as the liner notes say, “one can hear the band’s trademarks: call-and-response vocals, sublime harmonies, energetic podorythmie (foot tapping) and hurdy-gurdy playing that drive the tunes.”

Though there is much unique about this group, the foot tapping in place of drumming and the hurdy gurdy’s drone help create an exciting and beautiful sound not to be forgotten once heard.

Four of the songs on the album are instrumentals. The remaining eight are sung in French, as one would expect for a group at the forefront of the francophone folk movement. While it would surely be helpful to have a knowledge of the language, for those who do not, reading along in translation is a gratifying but different experience.

In additional to the fine vocals, exquisite harmonies, and expert musicianship, the song choice here is very much in the long tradition of what folk music has been: songs of work, humour, lamentation, religion and love. We hear of a French sailor in a terrible storm; nation-building; drinking; a soldier gone to war; faith, and romance, all passionately delivered.

While this hard-driving music draws upon a range of global influences, it respects the traditions from which it comes, and at the same time produces something joyfully dynamic and modern.