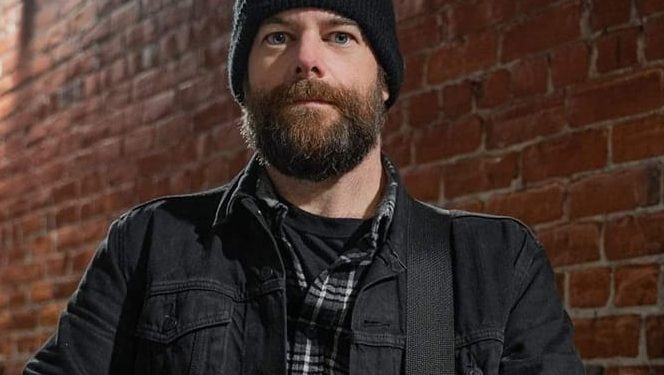 Life can be punishing, and the world can be a cruel place, and sometimes we just want someone to lay it all out how it really is, without varnish or artifice. Canadian indie folk-rocker Edison Rupert does just that on his rollicking ballad of hard luck, “Ticket to a Place.”

“Ticket To a Place” starts out with marching, percussive electric guitar as Edison tells the sad tale with plain-voiced candor in the vein of Johnny Cash.

I’ve got a ticket to a place that nobody knows,
I’ve got some years on my back with nothing to show,
If you come looking for me, I’m hiding in the shadows,
I’ve got my own dirt pile pillow, It feels like home.

The accompanying music video depicts Edison walking alone down a dirty snow-crusted street in Ottawa in the dead of winter, singing and playing his electric guitar. The guitar begins to rock and the tale takes on an infectious, bluesy melody as Edison croons about the shame of this life, slouching in the shadows: “There’s nowhere to go/Beneath this low,” he laments. “And I’d lay my bones/Anywhere that you can’t find me.”

And then the song’s perspective suddenly shifts, with Edison now recounting an encounter he had with a haggard man: “I picked up a ragged man from laying in the street/He said it’s my day to go son, can’t you see?”

It’s this perspective that’s actually based on one of Edison’s own life experiences; he was inspired to write “Ticket To A Place” after a sad and memorable encounter with a homeless man in Ottawa, on the very street where the music video was filmed.

“I saw a homeless man lying in the middle of the road with the traffic stopped in front of him,” he said. “People were just watching from the sidewalk, and I went over to him and got him up and onto the sidewalk where I asked if he was ok, and in the end, he just wanted someone to care.”

The experience struck him as a reminder to not let his compassion get diluted and desensitized by the overflow of homeless people in downtown Ottawa. This is perhaps why he chose to tell half the song’s tale in the first person — to put himself directly in a homeless person’s shoes.

“I was reminded to keep my kindness towards people no matter who they are,” he said.

Edison Rupert is a new musical artist from Ottawa. He has been making music for more than 15 years, and yet he is just starting to put it out there now. He’s a one-man show, and everything you hear is Edison writing, performing, engineering, mixing, and mastering in his basement studio.

Equipped with a heart full of sincerity, a house full of gear, and a drive to put his new music out to the world, Edison Rupert is not looking to slow down anytime soon.