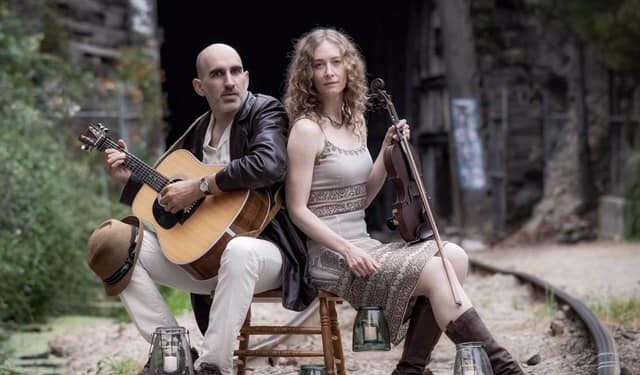 With love being a fire capable of breathing life into even the coldest and most dismal of circumstances, Canadian-American roots-folk duo Dan Frechette and Laurel Thomsen channel its vitality in their new single, “Make Me Come Alive.”

Serving as a preview to the duo’s forthcoming new album, After the Fire, “Make Me Come Alive” begins abruptly with a storm — a gorgeous, noisy crashing together of violin and guitar — before organizing into an easy, rockin’ groove. Pinawa, MB-born Dan sings the lead, and we learn about this exciting woman who’s caught his fancy, while Monterey, CA-born Laurel punctuates the song with shimmering vocal harmonies and deft, elegant violin.

Though some of the songs on After the Fire were written as far back as 1993, it was a 2020 storm — and then a fire — that sparked the making of the long-time collaborator’s new album…

Dan and Laurel had been creating music in Dan’s Bonny Doon-based home studio under California’s Covid-19 stay-at-home order; they were wrapping up the recording process when a heat wave, followed by an unusual lightning storm, caused a rapid forest fire.

“Dan’s little studio burned the morning after he’d rescued the rough tracks, studio equipment, and a range of instruments we play, yet rarely have the space to bring with us on the road,” Laurel said. “When trauma is over, how does one restore faith and pick up the pieces?”

Having had to evacuate to a friend’s home with nothing they could do, but wait for news, they ultimately decided to continue recording and added new material inspired by their current situation. They decided to highlight the rescued instruments they don’t often use on After the Fire, in addition to their usual violin and acoustic six-string guitar. Each of the 10 original songs deals with a facet of the journey from setback to reclaimed hope: “Make Me Come Alive” tells the story of finding faith in the possibility of love, while the comfort of home is explored in “Beale Street.” “Together Again” and “Money Shouldn’t Talk That Strong” emphasize the importance of community, while the need for personal strength and fortitude are explored in “If A Wave” and “Hey, It’ll Be OK.”

Meeting in 2012 via a chance YouTube sighting and fueled by a once-in-a-lifetime musical chemistry and friendship, Dan Frechette and Laurel Thomsen are prodigious players with songwriting that sets them apart. With soaring violin, diverse guitar styles, compelling storytelling, a dash of harmonica and humor, and a unique vocal rapport, they deliver a dynamic, engaging, polished performance. Dan and Laurel’s third album, Between the Rain, was Top 10 on Canada’s campus radio roots charts for 2016. They have toured North America extensively. Besides the US and Canada, they’ve toured a number of European countries, including Ireland, the United Kingdom, Denmark, France, and Germany.