Trad ‘supergroup’ Vinta is releasing an EP every month! 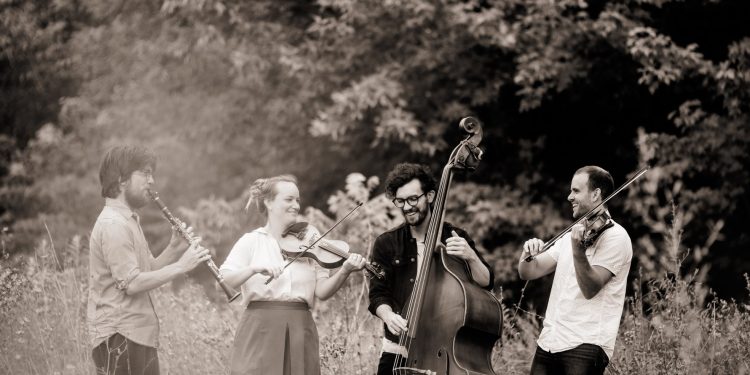 During these days of the pandemic, there are artists who’ve recorded new albums and released a song a month leading up to the album’s official release. There are others who’ve recorded a new song a month not necessarily with the intent of releasing an album when all is said and done. Then there’s the new quartet Vinta, who are ambitiously recording an EP a month, with each recording focused on a specific traditional fiddler. Vinta is made up of Emilyn Stam, John David Williams, Nathan Smith and Robert Alan Mackie. The four members have played together in various configurations for a number of years but really came together when Emilyn and John recorded their most recent album Honeywood.

“We all have this common interest in Western European music and social dance music but we also play a lot of Quebecois music, American old-time and have a lot of overlapping interest,” she said. “In 2020, John and I were releasing this album of music for these dances we know from western Europe. Both Alan and Nathan are guests on [Honeywood].”

It was originally scheduled for a May 2020 release, but it wasn’t until July of that year that Emilyn and John could do some backyard concerts with Alan and Nathan supporting.

“We created quartet arrangements of some of our duo music, and from there, everyone started writing new tunes and music for the four of us. We really like writing tunes, but we also love learning lots of trad tunes.”

Which leads to the new endeavour of releasing an EP a month.

“Because we’re exploring these various traditions, just learning one tune from a tradition doesn’t really give you the real experience of it”, said Emilyn. “So far, we’ve chosen one player’s repertoire from a specific place.”

One EP from Vinta highlights the music of French fiddler Léon Peyrat.

“We have a lot of connections there and [the French] are really good at documenting their traditional music. They have tons and tons of field recordings online to look through. I had done that on my own at the beginning of the pandemic and taught a bunch of tunes to the band, and they were really into it.”

“There aren’t recordings of him, but there’s a lot of old sheet music. He was a fiddle player but a fiddle tune collector as well,” said Emilyn. “His repertoire is really interesting. The melodies take these strange twists so the tunes kind of caught our eyes.”

The release of EPs by Vinta gives both the band and the listener a better idea of the music being featured.

“We wanted to do at least five tunes or medley[s] of tunes to get into that person’s playing and repertoire – zone in on what their style is.”

A big part of fiddle culture is the gathering together, perhaps with fiddlers you’ve never met before, and jamming on tune after tune, as Emilyn has done throughout the world.

“I played in Finland around 2016 at the Kaustinen Folk Music Festival,” she said. “A bunch of people know J.E. Taklax’s tunes. It was really sweet to be at that festival where they prioritize jamming and a real culture of jamming and sharing tunes … The sun never set, and people jammed all night. It was pretty sweet to land in from Canada and not have to change my sleep schedule at all!”

Next on tap for Vinta is an EP of fiddle music from Quebec’s Louis Boudreault.

“He has a lot of crooked tunes and a really exciting repertoire,” Emilyn said.

After that, the band will tap into the music of Denmark.

“Alan Mackie plays bass but he also plays fiddle,” said Emilyn. “He’s spent a lot of time in Scandinavia. He found this manuscript from the late 1700s. We’ve been enjoying learning these tunes. They’re almost classical sounding in a lot of ways but they’re still tunes [with] an A part and B part. Our interpretations will probably be very different than they did in the 1700s.”

The EPs by Vinta are being released through Bandcamp, and in keeping with the sharing ethos of fiddle culture, there’s a tune-learning element to these recordings through Vinta’s Patreon account.

“At the beginning of the month, we release the EP,” explained Emilyn. “Then throughout the month we’re releasing sheet music of all the tunes. We’re also doing some videos of us playing the tunes slowly and clearly of just the melodies.”

Vinta is just the latest in a long line of collaborations for Emilyn Stam. Her recorded output includes projects with Italian accordionist Filippo Gambetta, the late Rosemary Phelan, the Dutch band Té and the Canadian trio Eh?! along with four years of touring with The Lemon Bucket Orkestra.

“Music for me has always been about collaboration,” she said. “I grew up in Smithers B.C. [where] I was part of a youth fiddle orchestra. It was a very social thing for me. So all these different projects have been ways of exploring different traditions, writing tunes and being part of that development of the traditions. All these Trad tunes, you know, somebody long ago wrote them, so it’s fun to be part of that process. It’s the biggest honour when you hear someone playing a tune you wrote. You feel like you’re part of this growing tradition.”

For more on Vinta, check out Vinta.Bandcamp.com.