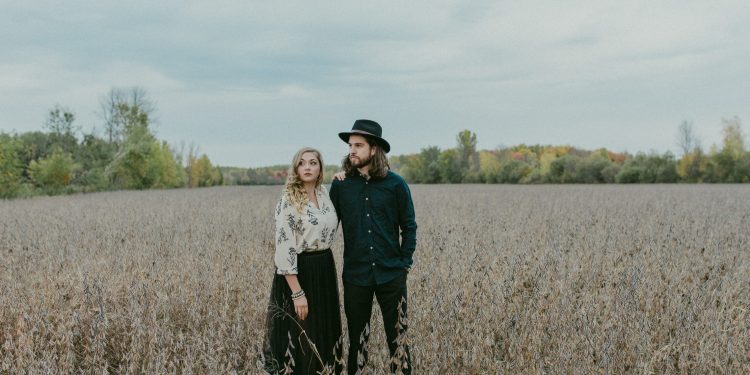 Montreal duo the Night Owls has entered the scene with a genre-bending self-titled debut album out this spring.

We’re thrilled to premiere the video for their first single, also called “The Night Owls,” here on Roots Music Canada.

“The Night Owls,” is a mysterious, slow-burning folk track, centered around the pair’s vocals and harmonies.

Appropriately enough, the couple, Simon Arsenault and Marianne Bourgeois, were awake composing this track until 4:00 a.m., writing about their lives as night owls. It’s about the feeling of being alone with one another, taking walks outside and feeling as though you’re the only ones in the city awake, they said.

“We like to play music at night,” they add. “The only thing that matters is each other, because in those times we feel like there’s only the two of us in the universe.”

They found great comfort in this time together (but alone) during the worst parts of the pandemic, they said.

Simon is a professional musician who performs as a session player for a variety of artists, when he’s not performing with the Night Owls.

He studied classical music, jazz and electro acoustic at the Cegep Saint-Laurent, the Université de Montreal and the Université de Québec à Montreal (UQAM) and was part of the progressive rock band Innerspace, which released two albums and sold thousands of copies, especially in Europe.

Marianne is a self-taught singer-songwriter who has started taking music more seriously over the past few years. She studied cinema and psychology, but has always written songs and poetry on the side. For the past two years, she’s been honing in on her own sound and taking singing lessons.

As a couple stuck at home during the pandemic, they started writing songs, putting together music that fit with lyrics Marianne had written. Those songs multiplied, and in no time, they had a collection worthy of an album. The project was co-written by both Simon and Marianne and produced by Simon, and they are enthusiastic about releasing it this spring.