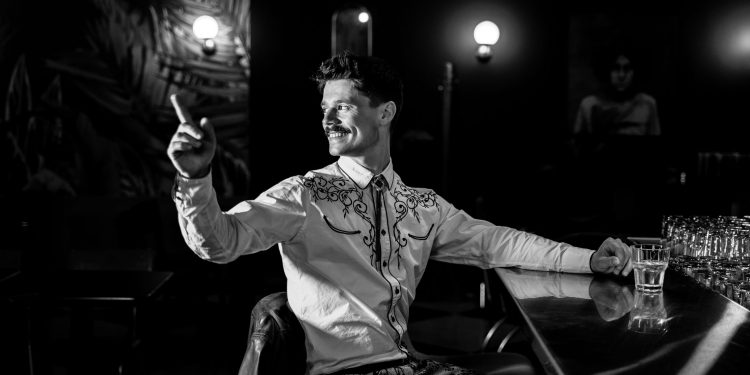 Anyone who has followed country music over the past couple of years knows that it is experiencing a renaissance with an infusion of new voices eager to take it in new directions. That was certainly one of the goals Lawrence Maxwell set out to achieve when making his third album Ballad Of Miles, a dynamic 13-song collection encompassing a wide range of songwriting approaches.

From the outlaw-tinged opener “Listening To Keith Whitley”—a tribute to the legendary ‘80s star who tragically died young—to the sweet, John Prine-esque closer “Happy Little Life,” Lawrence’s craftsmanship shines through on every track, powered by his naturally twangy delivery.

Maxwell hails from Prince Edward Island, Canada’s smallest province but one with a rich country music history based in every citizen’s relationship to the land and sea. In fact, before launching his musical career, Lawrence served in the Royal Canadian Navy upon graduating high school where, during downtime aboard his warship, he would compose thoughts that would lay the groundwork for his 2018 debut album Not Your Outlaw.

That record immediately put him on the Americana map and earned him his first Music P.E.I. Award. Lawrence followed it up in 2020 with Almost Natural, which further displayed his skill at blending the traditional sounds of folk and bluegrass with modern themes and production values. It garnered Lawrence his first East Coast Music Award nomination and an AmericanaFest-UK showcase in 2021, while proving his music’s ability to unite fans of both the old and new. Now with Ballad Of Miles, Lawrence is poised to expand his audience even further.

Although Ballad Of Miles isn’t a concept album per se, Lawrence and his trusted producer Adam Gallant had a specific plan for the record, largely due to pandemic restrictions. Lawrence and his band set up at Adam’s cottage for a week, creating a loose, clubhouse atmosphere that translated into their most high-energy performances to date. Spontaneity was the key, as each song was recorded in the order of the titles being pulled from a hat.

“I knew I wanted to approach the recording in a fresh and exciting way,” Lawrence said. “For my previous albums, I usually recorded a couple of songs whenever I could afford the studio time, and eventually I’d have enough material for an album. I learned a lot about efficiency and the power of momentum doing it that way, and with these songs I knew I had the right band that could sit in the pocket and put out great takes. And that’s what we got. It really took me back to my roots of just jamming with friends.”

Many of the songs also sprang from events occurring in Lawrence’s life at that moment, such as “Bouquet Of Flowers,” written for his partner immediately after he returned to P.E.I. following a stint living in Halifax, Nova Scotia. Lawrence explained, “I was driving a 26-foot U-Haul, towing my car behind it. For the first twenty minutes I was fighting off panic attacks, praying to God I wouldn’t see my Chevy Sonic come loose as I glanced in the rear views. Needless to say, I was thrilled to have made it home alive.

“However, I’d arrived on literally day one of mandatory self-isolation. Luckily my dad let me stay in his basement for two weeks, where I set goals of doing 1,000 push-ups in a day, writing a new song, and finishing season one of Schitt’s Creek. The only thing I didn’t complete was Schitt’s Creek. My partner came to visit me and we did the whole six-feet-apart thing, which was super weird. She brought me homemade baked goods and beer. If that’s not love, then I know I’ll never find it.”

Lawrence’s fitness regimen in some ways became the album’s overall identity, with his newfound passion for running inspiring other songs on the record. “I recently completed my second marathon and found that running was not only good for my health, but also my songwriting,” he said. “I’d hear melodies as I ran on the trails. ‘Bird & Worm’ came from literally watching a bird eating a dried up snail in the blistering heat. I thought it was a little too easy for the bird. Then this character Miles started forming and became the subject of the title track. He experiences the loss of a friend and is forced to do some soul-searching through riding his motorcycle and doing day labour on his late friend’s farm. I took on more of a narrator’s role in that one, although every song has a piece of me in it.”

“Ballad Of Miles” is indeed one of the albums most poignant ballads, but Lawrence also shows off his sharp sense of humour on the roadhouse-ready “Hurry Up & Hurt Me” and “Beer Song (More To Life).” In all, what comes across is Lawrence’s uncanny way with words, which after first listen clearly puts him in a different class than many of his country music peers.

If Merle Haggard’s blue-collar poetry could be combined with George Jones’ voice and Sturgill Simpson’s boundary-shattering brashness, the result might just be Lawrence Maxwell’s Ballad Of Miles. As an album steeped in heartbreak and laughter, it is the perfect soundtrack for these times, when every day brings a new set of challenges and unexpected gifts.

Lawrence Maxwell’s Ballad Of Miles is officially out Jan. 21 on all digital platforms, Bandcamp, and from lawrencemaxwell.com.