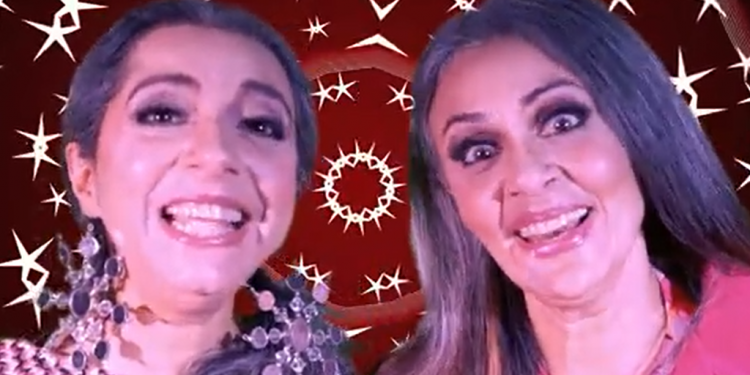 Toronto-based Arab-Canadian artists Maryem Tollar and Roula Said have a comedic and theatrical side project, which made an impression last year with a hilarious single called “Arab Ladies Sing Christmas Carols Written by Jews.”

We’re thrilled to premiere the video for the song “Beige Christmas” here on Roots Music Canada.

Examining the Christmas cheer that blankets the landscape from the perspective of outsiders looking in, the ladies have fashioned songs that are funny, provocative, and finally, heartfelt. The EP is available on Bandcamp and on all major platforms. For more information, please visit Bandcamp and the website.

“Semites Like Us Love Christmas” takes the back-story of “Rudolph the Red-Nosed Reindeer” (written by a Jew about an individual whose difference causes them to be shunned) and makes a claim for the “rest of us” to be included. “White Christmas” is transformed into the inclusive and infectious “Beige Christmas,” while the song that started it all, “Arab Ladies Sing Christmas Carols Written By Jews,” sets up Roula and Maryem’s love of the holiday and the story behind the title.

The seed of this project is rooted in Roula’s unusual history: she’s a Palestinian Christian who immigrated to Canada at age four and later married noted Jewish-Canadian musician/composer David Buchbinder. From him, Roula learned that many beloved Christmas classics were written by Jewish composers and lyricists. Decades-long musical friends Roula and Maryem also had a desire to universalize the holiday. Growing up Muslim, Maryem so desperately wanted to have Christmas that she would take the toys she already had and wrap them herself, so she could open them on Christmas Day.

“Arab Ladies Sing Christmas Carols Written by Jews” was composed and sung by Maryem and Roula – with arrangements and trumpet by David Buchbinder, additional piano by Maryem’s husband, Ernie Tollar, bass and guitar by their kids, and piano, bills and chimes by the brilliant Jono Grant (who also mixed and mastered the track).

“Semites Like Us Love Christmas (Rudolph)” interpolates the verses of “Rudolph the Red Nosed Reindeer” with the Klezmer sounds of international trio Buchbinder-Rubin-Bergeman, and then yields the mic to Dave Wall for a raucous re-imagining of the Rudolph lyrics.

“Beige Christmas” ends the EP on a note of pure joy. With Arabic melodies, Yuletide ululating, and light-hearted rapping in the verses (to beats cooked up by new collaborator Theo White), the song carves out a space for Jews, Muslims, Hindus, and others to celebrate universal love on this most Christian of holidays.

For those unfamiliar with Maryem and Roula, Maryem is a renowned Egyptian-Canadian vocalist, heard on the theme of CBC’s Little Mosque on the Prairie and A.R. Rahman’s Bollywood hit, Mayya Mayya.  She performed Christos Hatzis’ piece Syn-Phonia – Migration Patterns and his multi-media piece Constantinople. She performs with several Toronto musical groups including Al Qahwa and the Juno-nominated Turkwaz.

Roula Said is a singer, dancer, musician, and wordsmith of Palestinian heritage based in Toronto. Roula plays qanun (table harp) and percussion and is currently creating a song cycle entitled SongVersations with the Beloved, drawn from her original sufi-inspired poems, with support from the Canada Council. Roula has taught Arabic dance for decades and fronted Juno-nominated world music outfit Nomadica.