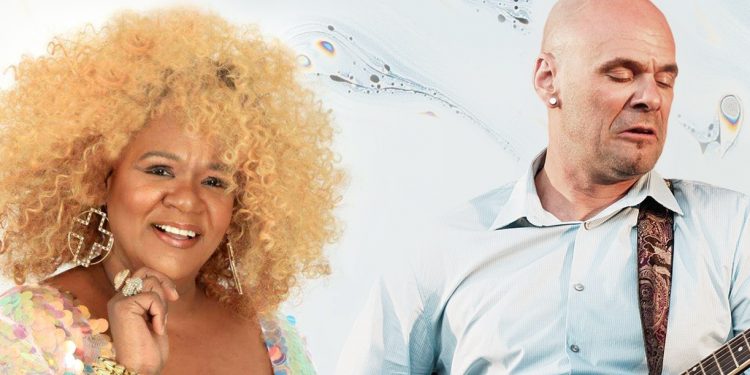 In 2019, when the world was a different place, I attended a Kingston Blues Society show at the RCHA Club in which Shawn Kellerman played with Jerome Godboo and his band. I had seen Jerome a few times and had heard of Shawn but never really paid attention to his superb guitar playing. That evening, he really got my attention. Like it says on his website, “Sitting up close at a live performance is truly an awesome, jaw-dropping experience.” That night, my jaw hit the floor. Sean’s guitar playing is transcendental in that you can almost see his spirit rise above his body when he’s playing the blues. Man, he is phenomenal!

Blown away by his skill, I chatted with Shawn at the break and after the show, and as I work as a social media manager/marketer for musicians, we stayed in touch. I had already heard his guitar playing on Miss Angel’s album, Down In Mississippi, as I’d done some work for her, but that album is classic blues in the Mississippi/Delta style and very different from Zoom’s new album, Chocolate Cake, featuring Shawn Kellerman.

Kitchener-based Sean played and toured with the late great Lucky Peterson (he passed in May 2020) for many years. He is also a gifted producer who started his label, Mouhaha Music, producing and mixing Bobby Rush’s Memphis Blues Award-winning acoustic album Raw, and most recently, his longtime friend, Zoom’s latest album, Chocolate Cake, contributing guitar and bass, with some talented musicians from the Waterloo region playing on it—Jimmy Boudreau on drums, Ray Podhornik on trumpet, Dave Wiffen on tenor sax and Matt Weidinger on keys.

Zoom’s boisterous, bawdy, blues/funk vocal performances on Chocolate Cake knocked me out. I hadn’t heard of her before, but I’ll never forget her now. Based in Detroit, her style is Chicago Blues, which to my ears means blues you can dance to. She’s played with legends, including Buddy Guy, Koko Taylor, and Bill Branch and the Sons of the Blues, around North America and Europe. Chocolate Cake is her comeback album after a 20-year hiatus from music to raise her family.

After almost two years of the soul-shattering, livelihood-destroying pandemic blues, the raucous, danceable life-affirming party blues of Chocolate Cake, is just what the doctor ordered. Zoom’s dynamic vocals, Shawn’s high-energy guitar, and the amusing, sexy, and saucy lyrics in many of the songs on the album are the perfect antidote to the tiresome, Groundhog Day-life perpetuated by the global pandemic. I laughed aloud at some of the lyrics more than once, with absolute delight! “Amazing Nepenthe (Weed)” might be my favourite new song. Sing it with me, “All I need is a little bit of weed.”

Zoom’s voice is sensational—she was truly born to sing the blues—and I love her passion and the raunchy humour in the lyrics. Standout tracks on the album include “Big Boss Woman,” which should be an anthem for all female entrepreneurs.

As a single woman who has worked in the music industry for 13 years, I’ve been living hand to mouth for most of that time. However, I’m a firm believer that music is one of the things that keeps us going during hard times. Its importance should not be understated, and musicians should be supported.

“Born to Sing The Blues” is true of Zoom, and this declaration is as genuine as it gets. “Still Got the Rhythm,” a testament to the wonder of Viagra, will make you chuckle while you’re shaking your hips to it in your living room.

“He came home early in the morning, he was ready to jump,” she sings. “He took a funny little pill, he was ready to bump / I told him, take it, easy baby, you so big and strong / he said, don’t worry about it Mama, I don’t last that long.”

The title track, “Chocolate Cake,” is a funky, infectious horn-trimmed gem that reminds me, rhythmically, of Jack Mack and the Heart Attack.

“Just like Ricky Bobby, we shake n bake,” Zoom sings. “Ah, come and get a piece of this chocolate cake / You like it when I give it to you, tell the truth / I satisfy your craving in your sweet tooth.”

Shawn’s guitar solo in “My Baby Don’t Love Me” is a stellar accompaniment to Zoom’s weary, scratchy wail which is perfect for this classic, “damn, I’ve got the blues” composition.

The penultimate track, “Love Bone,” is another favourite because of Shawn’s sensational wah-wah guitar and Zoom’s delivery of the naughty lyrics.

“I’m like a bitch in heat, I want a doggy treat,” she sings. “I want your love bone / Don’t want to see your smile, we do it doggy style.”

There aren’t too many singers who can get away with belting out lyrics like that while sounding like they’re keeping a straight face.

However, on the final, most consequential track, Zoom gets serious with the explicit “Tired of the Hate,” a lament about racism and an important reminder of why Black Lives Matter. “Sonny, day to day I’m going out for a run / I turn around, people chasing me with a gun,” she sings.

Chocolate Cake is a terrific feel-good party album that affirms that sex, weed, and the blues are still viable reasons for not giving up on life when it’s damn hard.

Listen to it on a Friday night or anytime you need to get your groove on.  And know that you would be remiss in not buying a copy for yourself and your friends who could use a pick-me-up this holiday season. It’s the perfect stocking stuffer for blues fans everywhere.