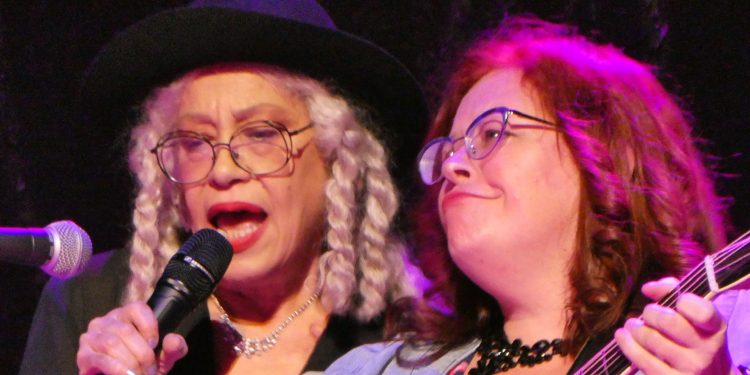 You know, sometimes some of these blues guys can sound like they’re running a salvage job on a bygone spirit, brassy and cold, like a Viagra version of lust, and not unlike the effect of taking a day job option on that most pernicious practice of human slavery, which tragically motivated the original Black growl of America’s most unique art form.

Last Friday night at Roy Thomson Hall, there was no chasing of ghosts. The true blues held sway, with female authority, striding up in heels and earrings, and lighting a musical bonfire on the chilliest night so far this year. In a packed house of masked patrons of the art, nine musicians and six unique vocal stylists paraded their talent, teamwork and true soul.

After the All-Star Band, under the direction of veteran saxophonist Colleen Allen, warmed up with a reveille-styled take on “Little Liza Jane,” Mistress of Ceremonies Taborah Johnson, arriving in off-black, focussed the casual confidence of her half-century of professional T.O. experience on welcoming us all with the charm of a 22-year-old girl. The glamour quotient escalated steeply with Meghan Parnell’s entrance in a silver-sequined gown and persimmon coif. She swooned and soared through several tunes taken from her band Bywater Call’s repertoire. With their new album waiting on the tarmac, we are likely to have a lot more opportunity to hear Meghan’s blazing vocals in the coming year. 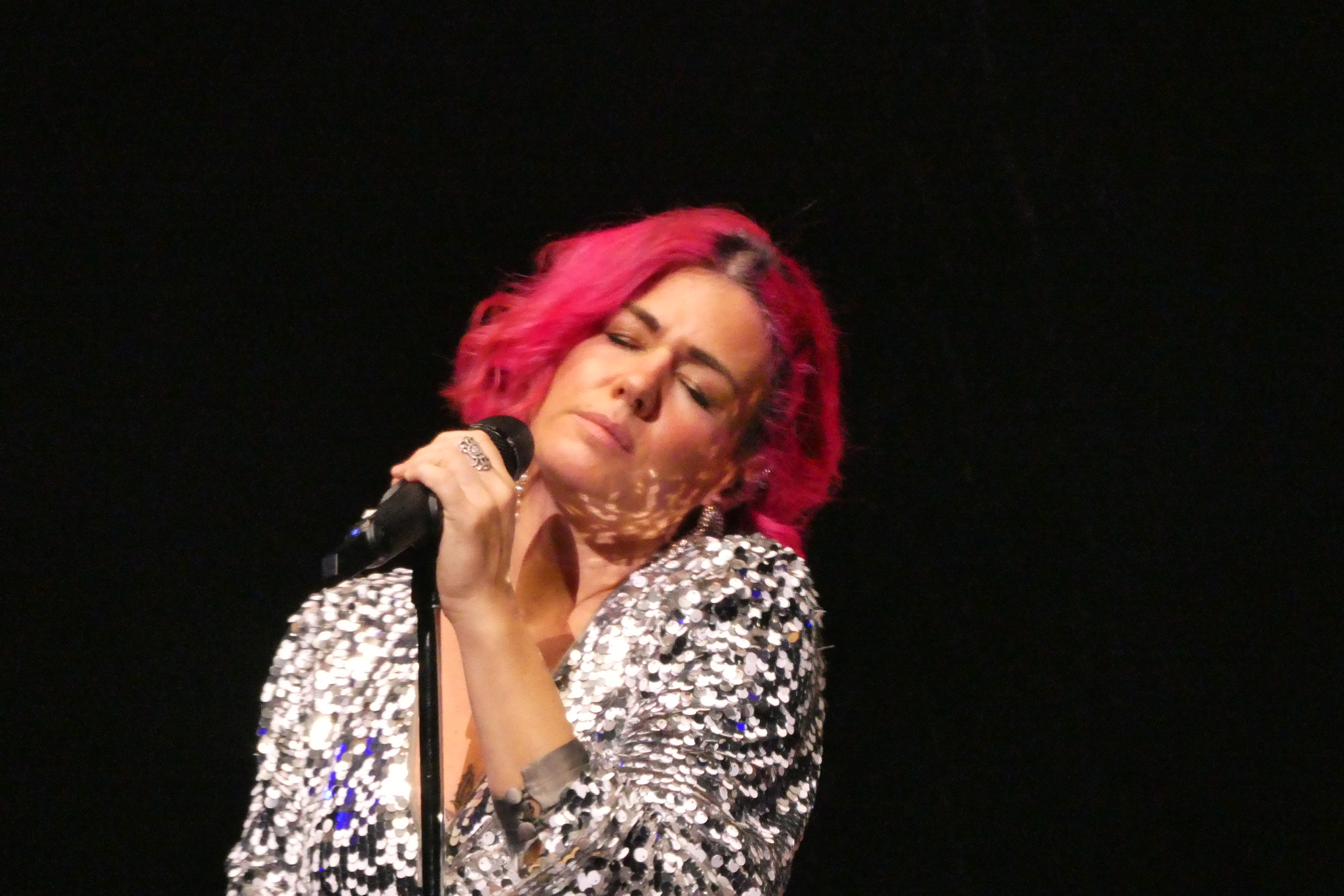 Tabby returned to introduce Halifax‘s Reeny Smith with three concise words: ”Girl can SAAANG?” In a tailored grey suit (with matching fingernails), displaying a Maritime level of charisma and a Whitney-wise voice, she opened up wide and soon had the audience fully charged and howling back at her. The 25-year-old powerhouse jolted a fresh current through the band and took over the stage most majestically. She was by turns heartsick and triumphant, scouring each lyric ‘til it shone with her talent. Vibes were definitely continuing to accelerate.

What else could follow Reeny’s arcing electricity but a long, tall vision in a ruched vintage gown and a Cleopatra do, slinking in out of stage right? This was the much-anticipated Elise LeGrow. Her edgy voice with its core of cool lifted the band into a state of floating omniscience and elicited some serrated soloing from the string section (guitarists Emily Burgess and Suzie Vinnick) on her song “Drinking In The Day.” With a fresh new album, entitled Grateful, already burgeoning on podcasts and worldwide DJ playlists, her choice to feature original selections from it instead of her impressive backlog of blues covers spoke to the smartly progressive vector of the evening’s programming. 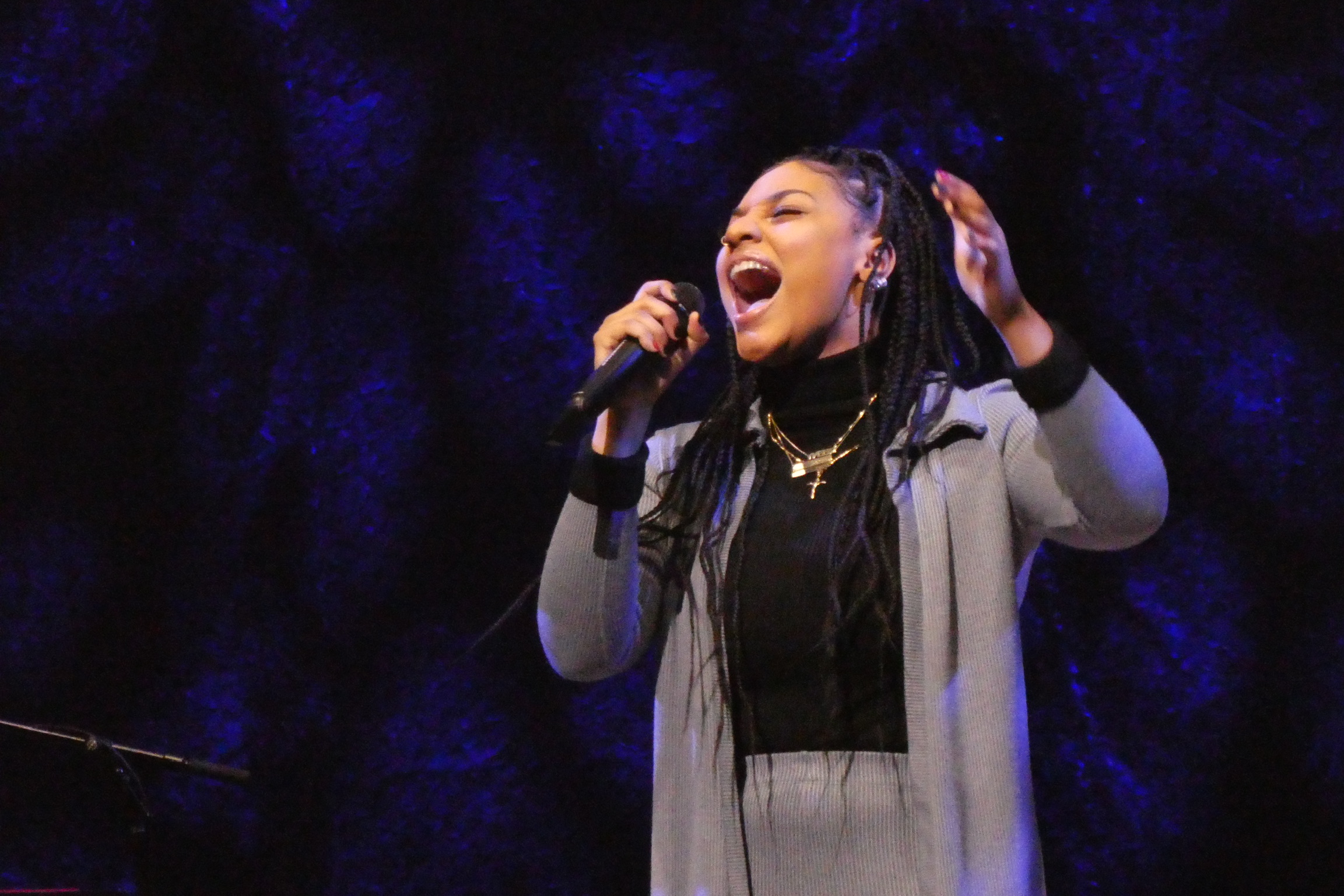 We had to retire collectively for a bit then, to the swag table and the bar, to discuss and purchase our newest musical crushes. We returned to find a refreshed Ms. Johnson, transformed, courtesy of a fuzzy comb-out and an angelic gown, into a silvered seraph. During her opening medley of “Come Sunday,” and her elegiac original “Someone’s Gone,” she edged up to Suzie Vinnick back at stage left and asked, “Who is gone Suzie?” She replied sombrely, “Ellen McIlwaine is gone…” The house stilled for a moment. The revered slide player who had won the career-crowning Blues With A Feeling Award at the 2019 Maple Blues Awards ceremony succumbed, suddenly, to cancer this past June. An emotional concord was now flowing through the audience as Tabby introduced soul songstress Quisha Wint, who summoned the band’s considerable vocal talent to sing harmony backup on Etta James’ euphoric classic “Something’s Got A Hold On Me.”

She paused to remember her own absent friend, Hayden Neale, with whom she had last shared that same stage, performing with his band Jacksoul. And then, with her 2012 composition “Black Shoes,” she stoked up a renewed, personal ambience, committing to the churchy mystique of the moment, and opened up the huge richness of her voice, which was in turn gilded by the chanting of the musicians behind her. Then, fully supported by an audience clap-along under blue house lights, she introduced subtle modern nuances to reawaken the sincerity of Nina Simone’s “I Wish I Knew How It Feels To Be Free.” 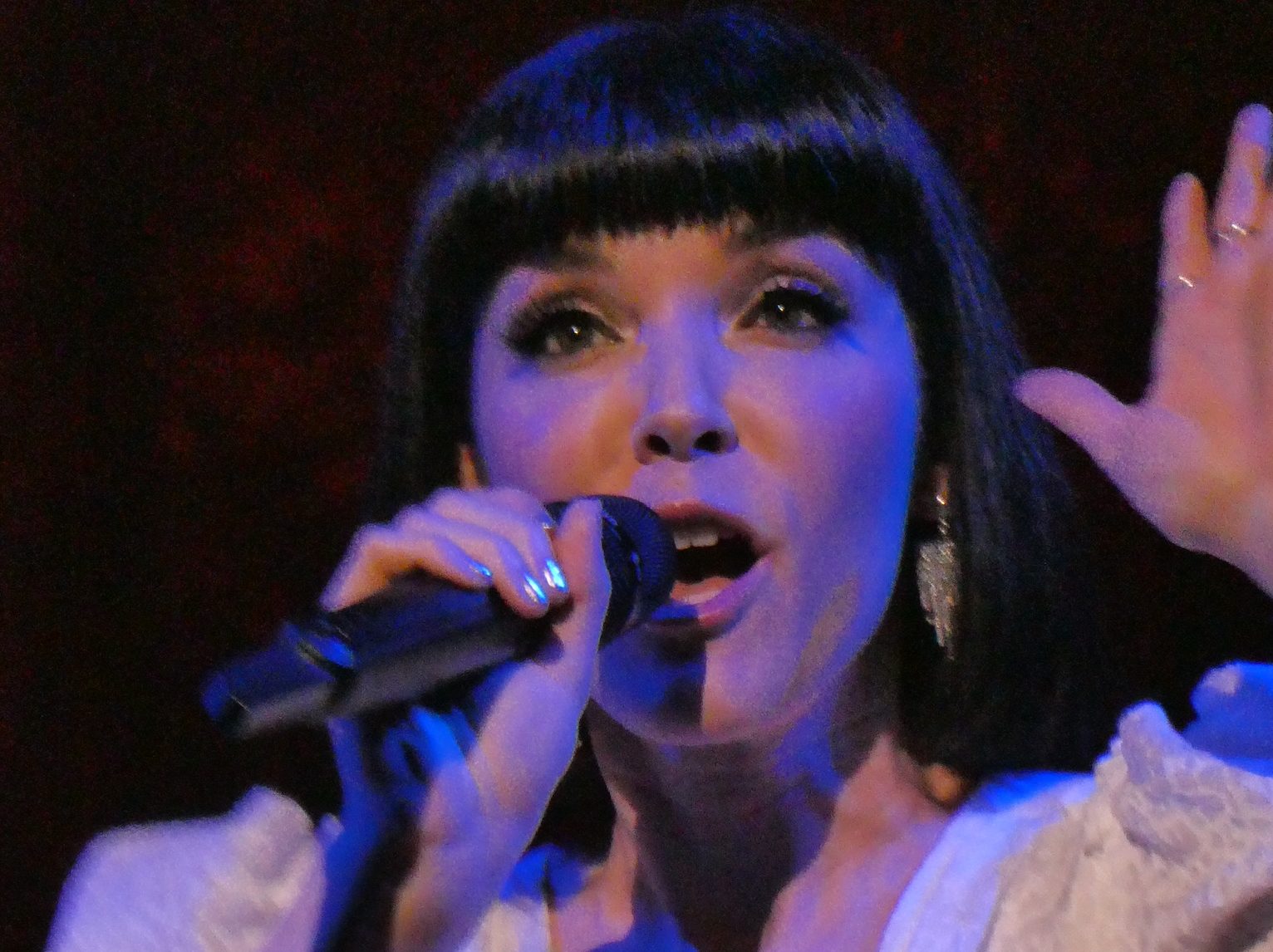 With a blown-away audience facing her, show closer Dawn Tyler Watson had to step up her game with all of the guts, intimacy and personality that made her win the Entertainer of the Year prize at the last Maple Blues Awards. First, she relaxed the audience by confessing her Montrealer’s love for Toronto, then she revved up the horn section (Colleen Allen, Maria Goudy, Carrie Chestnutt and Elena Kapeleris) with some trading of eights, fours and twos, and finally she initiated a tacit agreement with the rhythm section of Morgan Doctor, Lily Sazz and Carlie Howell, who had been giving support far above code all night, to groove even deeper and hotter, maintaining a particular rapport with the drummer. Her rousing original, a refutation of body-shaming called “I Look Good” brought matters to a steady bubble, but she set the juice boiling over on “Feels Good,” which deserved at least some aisle dancing if not a complete masks-off bacchanal…but hey – it`s been a while.

When the whole crew returned to reprise “Will The Circle Be Unbroken,” everyone seemed to be at high tide, with Meghan Parnell, especially, rising dramatically to the occasion, buoying a collective panoramic spectrum out past the freezing indigo night and into our warm blue memories. 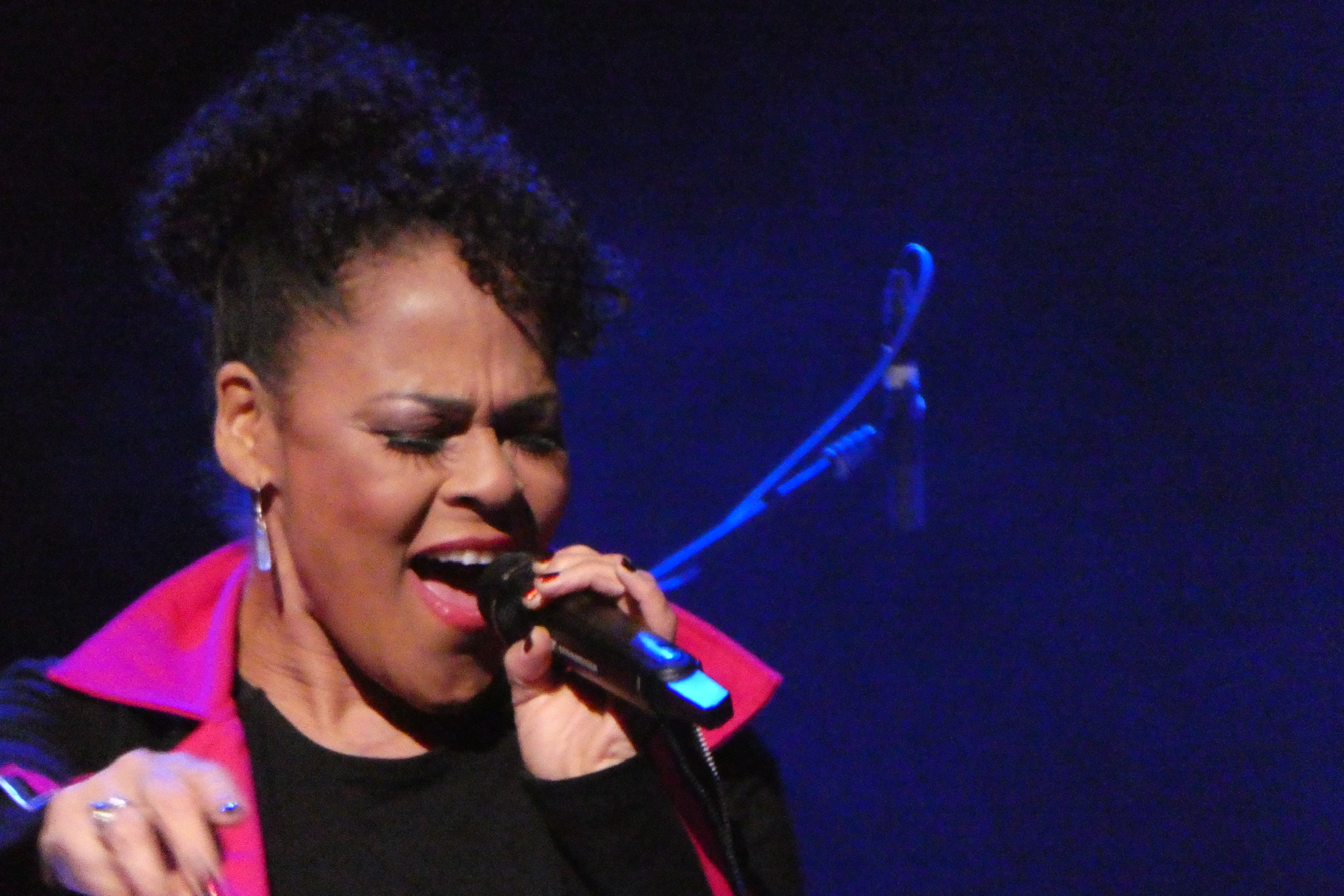 Shane Cook and the Woodchippers – Be ...