Shane Cook and the Woodchippers – Be Here for a While 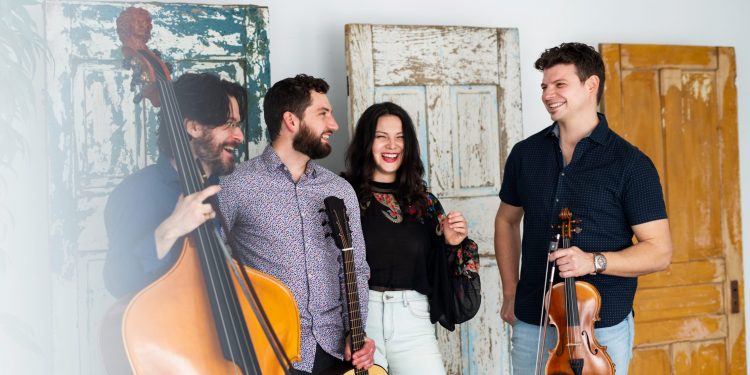 This is definitely not your grandpa’s fiddle record.

Shane Cook, with three of his very talented friends, has put together a magnificent selection of tunes on this CD, all superbly composed, arranged and played. Listening to Shane’s playing on this recording is nothing short of thrilling. It’s a journey through joy.

From Ontario tunes to haunting ballads and Texas swing, the repertoire on this album is extremely listenable. While the roots of this music dig down to the earthy traditions of fiddling in rural Ontario, its branches reach skywards, bearing new life. The musical fruits are rich and ripe for the audible picking.

Shane, now based in London, ON is a Canadian and US fiddle champion who grew up in Dorchester, ON, just east of London, as part of a multi-generational fiddling family. He came of age on the Ontario fiddle contest circuit and went on to win the three biggest fiddle contests in North America. He won the Canadian Open and the Canadian Grand Masters fiddle contests each three times. He also is a Grand North American fiddle contest champion and is the only fiddler from outside the USA to win the American Grand National fiddle championship, a feat that he achieved at just 17 years old. This new recording shows off Shane’s considerable talents; his astounding musical abilities are evident.

Emily Flack, who also hails from Dorchester, both sings and plays piano on this CD. Hers is a translucent voice that evokes the image of clear falling water. And her piano stylings are just as beautiful. But not only that, Emily step dances, as you would too if you were part of the younger generation of the Leahy family (her mom, Denise, is the lead singer of the band Leahy).

Kyle Waymouth, from Stratford, comes from a musical family as well. He learned to step dance at a young age, growing up with his dance teacher mom, Judy Waymouth. Kyle became a champion step dancer and also mastered the guitar.  Today, he plays and dances with some of the best traditional bands around.

Joe Phillips, from London, ON is the backbone of this ensemble, playing both bass and viola da gamba. Joe is well-known in the world of acoustic and folk music, but he also plays classical, orchestral and chamber music. And he teaches at the University of Western Ontario. Busy guy! It’s quite safe to say that the sound of this recording is totally completed by Joe’s wonderful contributions.

The names behind the production of this recording are equally stellar. Andrew Collins takes credit for producing (with Shane), and also recording and mixing. David Travers-Smith did the mastering, and Ian Bell contributed a gorgeous painting for the inside cover. Guest musicians on the album include jazz great Bernie Senesky, Quinn Bachand, Darrin Schott, and Andrew Collins. Shane has decidedly brought in only the best for this, the debut recording of Shane Cook and the Woodchippers.

There are really fantastic sets of reels here, along with jazzy swing tunes, waltzes and lovely ballads. There’s even a waltz clog. You cannot help but dance.

Give it a listen.

Registration is now open for next summer’s ...