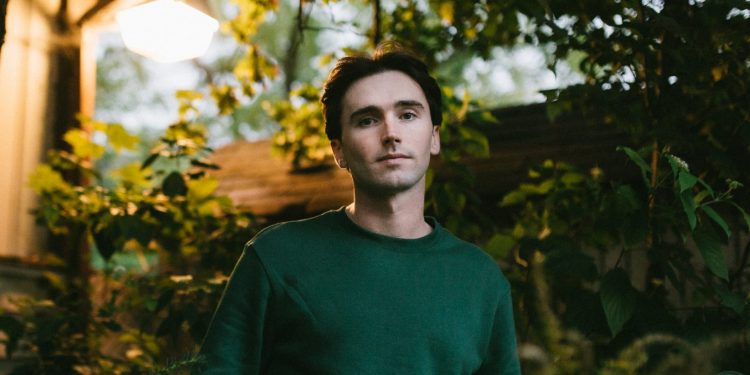 Not one to sit still, even throughout the pandemic, John funded the Traveller through a series of twenty socially distanced driveway and backyard concerts across the Greater Toronto Area — bringing live performance back to the hearts and ears of music lovers.

For John, the album began to emerge over his solo tour of Canada and the USA back in 2019, inspired by his experiences on the road. John explained, “These songs started in journals I kept during my travels, or in the notes app of my phone, and were finished on days off, at sound checks, or while in transit.”

A Roots Music Canada exclusive, John digs deeper into the stories and intentions behind each track on the album below!

Catch John Muirhead and his band tonight (Nov. 26) for an album release performance at Supermarket (268 Augusta Ave, Toronto). Tickets for the release show are available for $15 in advance (available on Eventbite) and $20 at the door.

“So your masterpiece was a book they wouldn’t read. All your inky sleeves and sleepless nights, cold coffee at daylight”

“Masterpiece,” at its core, is a song about self-doubt, the fear of failure, and the comfort that comes from talking to someone who shares the same feelings. I knew as soon as I wrote the song that it was an album opener – I’ve been working on this project for years now, and that comes with a lot of fear. Putting it first on the album is me owning and accepting the self-doubt that comes alongside vulnerability.

‘Love Can Save Us’

“Take whatever you want from this: If I am the first date, you are the first kiss. Caught in a rough spot and you were the plot twist”

“Love Can Save Us” is a song about inviting all kinds of love into your life, and giving yourself permission to feel love from those around you. It’s a simple, yet powerful statement – love can save us, if we let it. This one is particularly special to me – doing “virtual singalongs” during this song on livestreams this year kept me sane while we were all stuck inside.

“It seems I’m leaving before I arrive, it seems this journey has cursed me at times. The places I go and the strangers I stay with, they don’t make a home and it don’t make a pay cheque”

In 2019, I played 85-plus shows across Canada. I was travelling solo most of the time and coming back home for short stints before taking off somewhere else. It was incredible, but it also had its downsides. One night on an emotional call home, I said the words “every time I leave, it feels like I’m leaving more and more behind.” As soon as I hung up the phone, I wrote “More Behind.” This one is a bit of a stylistic departure for me – my first song with horns and big group vocals. I’m in love with how it turned out.

“You are not the road, you are the Traveller. This is not your story, it’s a chapter.”

“Traveller,” the title track of the album, is a song about self-ownership, about living authentically, and enjoying each step of the journey. It was inspired by a book called “The Alchemist” by Paulo Coelho, which follows the journey of a shepherd named Santiago, a name that eventually made it into the lyrics of the song. This was the first single released from “Traveller,” and to this day, one of my favourites to play live.

“Guess when you leave it’s for forever. From here, there ain’t no turning back. We got as far as we could manage on a half a tank of gas”

Sometimes, when a relationship ends, no one’s at fault. Both parties tried their best, but could only get so far before it fell apart. It leaves you wondering if it was doomed from the beginning, or if there was ever a chance for it to work out. “Tank of Gas” is a melancholy reflection on exactly that. Musically, I really embraced my folk roots on this one, complete with three-part harmonies and a bluegrass-inspired riff.

“If I die before my time, crack the bottle and drink it dry. If I leave you suddenly, pour one for you and one for me”

“Two Shots” was inspired by a late night conversation and a bottle of scotch. My dad and I have this tradition, where every time a major life milestone happens, we share a drink from a special bottle of scotch. It’s reserved for the big moments in life, like weddings, graduations, album releases, etc. One night, while mourning the loss of a close family member, my dad said, half jokingly: “One day, when I’m gone, you’ll have to take two shots: one for you, and one for me.” From there, “Two Shots” poured out of me.

“American cash, all torn in the corners. We burn up the last 80 bones at the bar by the border. Save the change for the tip and the taxi, nothing left I can claim if they ask me”

At the end of 2019, I went to the US three times in the span of a couple months. Driving around in states I’d never been to, I started to take note of the subtle differences from home. Everything felt familiar, but occasionally things like the radio news coverage, the tall billboards, and the currency made me feel so much further from home than I actually was. “American Cash” was written post-travel as an attempt to make sense of what I saw and what I felt.

‘The Space Between Stars’

“So convince me the space between stars is only as far as it looks from the ground. I don’t see you anymore, we hide behind metaphors. How come you never speak clearly and loud anymore?”

“The Space Between Stars” is a song I originally wrote and recorded for my very first EP in 2016. It’s been a staple of my live set for years, and I’ve seen the song evolve over time. For quite a while I’ve felt that it deserves to be re-recorded to represent the changes made to the song, and I’m so happy with how it turned out. To me, there’s something special in this song. I feel something different every time I play it.

“Wherever I go, wherever you are, I’ll be the night sky if you’ll be the North Star”

If you’re lucky enough to find it, good love will give you direction and lead you back home when you go astray. I wrote this on a clear summer night in Winnipeg, MB, after playing the Winnipeg Folk Festival, far away from the people I love. Something about the way the stars were shining made me miss home and reflect on the love I’ve been lucky to find in my life.

‘I Can Sleep Anywhere’

“I’d sleep on the floor every night of my life just to do what I’m doing tonight. I’ll live in my car, I’ll play empty bars. If I’m singing, then hey, it’s alright.”

“I Can Sleep Anywhere” was written after my first tour. In short, it’s about living on the road as an indie musician, loving what you do and travelling far and wide for music. There’s a longer story about this song that involves a bluegrass band, a bottle of moonshine and a misplaced tent, but you’ll have to come to a show to hear that one.

“I swear I’m not just saving face, I’ve changed since we last spoke. Killed the fire, cleared the smoke. I walk on coals until we get back home”

“This Distance” is a breakup song. It’s about owning your mistakes and reaching out a hand to make amends and find forgiveness. While I love all of the “Traveller” songs equally, these might be some of my favourite lyrics I’ve ever written.

The McDades are back! Jan Vanderhorst talked ...