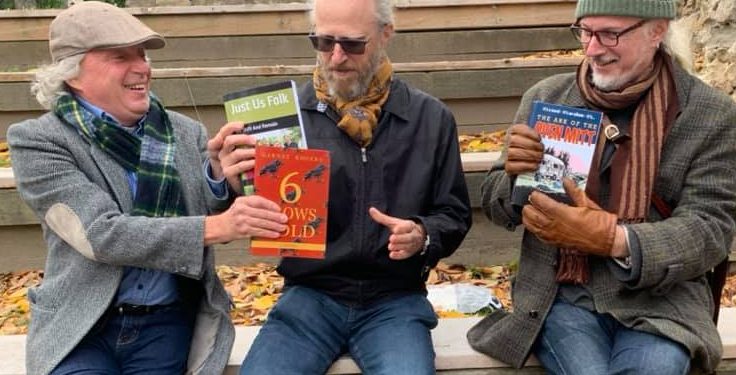 He regularly interviews artists for his online radio show, Just Us Folk, then turns those interviews into features for us here at the website.

But today, Jan is on the other side of the interview equation.

I’m taking to him over Zoom about his new book, Just Us Folk: We Shift and Remain, available now through Amazon.

The book marks the 40th anniversary of Just Us Folk and is a compilation of the stories he’s written for Roots Music Canada – plus several others he’s written about American artists.

The conversations are wide-ranging, but one theme comes up in nearly all of them: adapting to the COVID-19 pandemic.  The book is a veritable time capsule, filled with evidence of artists’ psychological processes as the days stretch into months and now years.

“At the beginning, it was sort of panic,” Jan recalled. “But I think as the year went on, you know, they kind of calmed down and were able to, you know, focus on, ‘Okay, what can I do? As opposed to what can’t I do?’” 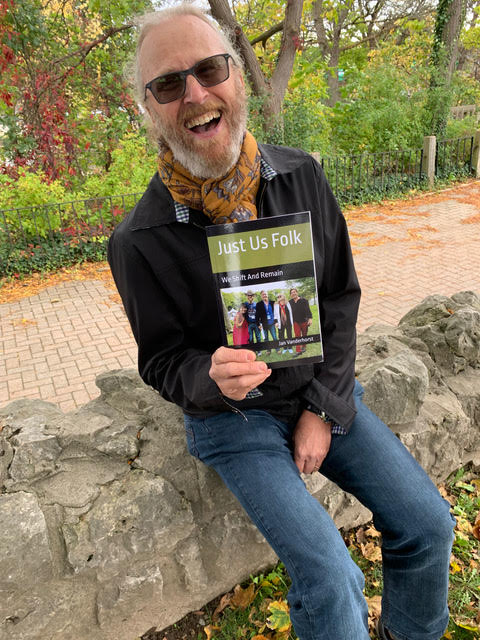 Singer-songwriters James Gordon and Garnet Rogers both wrote books, Jan noted. David Essig too is releasing a book that expands on the stories of several of his songs. Emma Cloney of the New Customs has gone back to focusing on nursing, he said. And Justin Rutledge went back to school to study arts administration.

In fact, Jan said, he senses that some artists likely never will fully return to the nomadic life of the roots troubadour, especially since the internet offers numerous methods for staying connected to fans.

“I think people are taking a hard look at what they have done in the past,” he said. “They’re changing the priorities. They’re not maybe relying so much on touring, you know, as much as many of them would enjoy touring.  Like with J.P. Cormier, you know, when the pandemic hit, he put all of his career online. And now that things are opening up, he’s fitting the touring in amongst the YouTube content creation, as opposed to the other way around.”

Jan himself had to adapt to working online during the pandemic.

A longtime producer with CKPC in Brantford, Jan previously also hosted Just Us Folk on the station for 39 years, but late last summer, a station format change led to the sudden cancellation of the program and a rapid decision to relaunch it as a podcast.

Within a week, Jan and his wife had outfitted an office space with a microphone, computer interface and editing software, set up a website and launched a new episode.

And like the artists Jan interviews, Jan has reimagined his work in response to the opportunities presented by the online sphere.

“It’s changed my focus, because before, the show was very Southern Ontario-centric,” he said.  “Now that I see… that there are people who check out the website from around the world – you know, Australia, throughout Canada, the UAE, in the US, the UK, Ireland, Sweden… I’m not bounded by no boundaries of Southern Ontario, or even Canada, you know? I can mention concerts wherever they may be. So that’s kind of cool.”

It’s too early to tell how the book will sell, Jan said.  So far, he’s just given out copies to people who participated in it in some way.

But, he said, laughing, “Jeff Bezos won’t be going up into space based on my sales.”

Julian Taylor has followed up his Juno-nominated ...