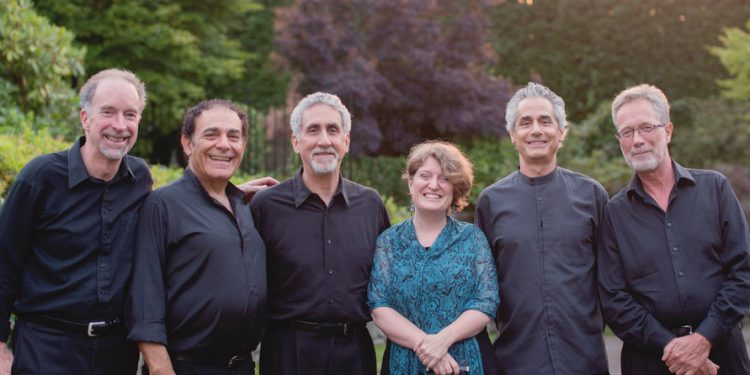 The Road Never Travelled – which commemorates the 35th anniversary of the Vancouver-based Jewish music ensemble Tzimmes – is a joyous musical odyssey and celebration of Jewish music from around the globe. Band leader and founder Moshe Denburg explores the band’s and his own illustrious musical past with a diverse array of music, and with the talented musicians who comprise the Tzimmes musical family of both the past and the present – including the late master hand drummer Adel Awad. Moshe’s Jewish and intercultural roots shine forth in every one of the 18 tracks, showcasing his gifted composing, songwriting and singing abilities, as well as the band’s stellar musicianship. Appropriately, he ends disc one with a cover version of The Beatles’ In My Life and disc two with a Hebrew rendition of the same song – a tribute to all those cherished memories of Tzimmes’ magical musical journey over the past 35 years.

I spoke to Moshe about the new album.

RMC:  The Road Never Travelled was released to commemorate Tzimmes’s 35th anniversary. What are some of your favorite memories of your journey with Tzimmes up until now?

Moshe: The first album, Sweet and Hot, received a prime time review on NPR’s All Things Considered, with host Robert Siegel. This one seven-minute review helped sell enough albums to pay for our next release, A Lid for Every Pot. Such is show biz. There are too many memories to prioritize, but basically it comes down to meaningful moments with colleagues. I especially memorialize my colleague, the late Adel Awad, whose hand drumming was legendary, and with whom Tzimmes reached a new level of musicality.

RMC:  Was this recording a summation of your entire musical career thus far?

Moshe: In a sense, every new work is a summation of all that has come before. But I can say that the retrospective aspect plays an important role in this recording, bringing forward so many works that were on the back burner, or were never recorded before even though they were created previously.

RMC:  How would you describe the music that Tzimmes plays?

Moshe:  Tzimmes is dedicated to the buffet approach to Jewish music – in other words, we do our best not to neglect any aspect of the historical Jewish experience. We’ve been around the block in this world; so Tzimmes plays in styles that incorporate Ashkenazi (Klezmer and Yiddish), Sephardi (Judeo-Spanish), Mizrahi (Near Eastern – Hebraic), and contemporary western musical forms; and in four languages: Hebrew, Yiddish, Ladino and English. The cross-fertilization of these different cultural expressions helps give traditional repertoire a new sound, and new repertoire added originality.

RMC:  You have reprised and remixed songs from previous recordings on this CD, including tunes that featured original members of Tzimmes such as hand drummer Adel Awad, who passed away (may he rest in peace). What was it like to revisit these tracks and hear Adel play again?

Moshe: It was a thrill actually, and we are still working on remixing the rest of the tracks of Sweet and Hot. This aspect of the project came about when I realized that there were two distinct categories of Jewish music on the recording – secular and sacred. But as I didn’t have quite enough material for the second disc, and as I was in the midst of remixing our debut album, it seemed completely appropriate to include three liturgical tracks from it. And the added bonus is that it would bring back several musicians who were not featured on the new recordings, namely: Myrna Rabinowitz, Julian Siegel and of course Adel Awad, RIP.

RMC:  What is your favourite track on the recording and why?

Moshe: Tricky question. It’s like asking a parent who their favourite child is. Impossible to answer for emotional and diplomatic reasons. But I will say this about the title track, “The Road Never Travelled”: It encapsulates my personal philosophy well, and musically it has a complexity that I consider an achievement.

RMC:  What does the title track, “The Road Never Travelled,” allude to?

Moshe: Aha, so now you ask about the title track! It alludes to the need to go forward in life, without second guessing oneself too much. It is a call to action, to do what one must do. It is a midrash on the adage: ‘If not now when?’ There are other, perhaps more mystical matters that come into play, but this for me is the gist of it.

RMC:  Your musical journey has taken you to many places, from your native Montreal to Israel, India, Victoria and eventually Vancouver. What country inspired your musical journey the most and how does this recording incorporate the various places you have lived in?

Moshe:  The whole idea of seeking inspiration from the music of non-western cultures started, for me, in the 60s. The Beatles, and others, were exploring the music of India and other cultures, and bringing their techniques and instruments into their own music. I have always thought of Jewish music, and the Jewish experience itself, to be an example of interculturalism, so it seemed quite natural to go this route. Overall, I must say that my experiences living and studying music in India were seminal in my development as a musician. “Sweet Melissa” is definitely a direct offspring of my India experiences. Israel, where I began my musical career and lived for seven formative years, is of course always the wellspring of my inspiration – the music of the Hebrew language, in its sacred and secular aspects. And regarding Yiddish, the language of my forebears, it is a language that was all around me growing up in Montreal.

RMC:  You wrote the song “Sweet Melissa” when you were in India in the 1980s but never recorded it until now. What is the story behind the song?

Moshe: It is primarily a love fantasy, in which the idealized beauty of womankind is personified. The backstory, as I related in the album liner notes, is as follows:  “In 1983 I was studying and travelling in India, and found myself in Rishikesh. For older hippies this may be familiar – it was the town in north India where the Beatles went to study transcendental meditation with their guru, Maharishi Mahesh Yogi. In fact, the meditation centre is still there. I found myself being invited to a different Ashram, where I was given my own room to do my own thing. So I played my guitar and worked on this song. Upon getting back to Canada, I completed the work and played it in concert several times over the years, though not with Tzimmes. The piece you will hear is very much in a raga (modal) style, and is an art song of almost 10 minutes’ duration. This is definitely an expression of my intercultural journey, and it features bansuri (Indian bamboo flute) and sarangi (Indian bowed string), as well as great ‘monkish’ (okay ‘synagogue-ish’) meditational chanting.”

RMC:  Your last recording was KlezMyriad in 1998 or 23 years ago. Why did it take so long until you were able to record a new CD?

Moshe: One of the main reasons Tzimmes has not released this material sooner is because I became very involved with establishing an intercultural orchestra in Vancouver. Called the Vancouver Inter-Cultural Orchestra (VICO), it was begun in 2001 and turns 20 this year! At the time of my 70thbirthday in 2019, having wound down my administrative commitments to the VICO, I hatched a plan to get back to the tracks I had laid down with Tzimmes, and to add to these other materials, old and new.

RMC:  How did COVID affect the recording of this CD? What adjustments did you have to make due to the pandemic?

Moshe: Most of the tracks were laid down before the pandemic hit, so the work that was done during the pandemic was mostly editing and mixing, which was done by the producer (me) and the engineer. We were careful, and in fact, at first we did some mixing sessions via Zoom. During the lulls in the pandemic, we did have a couple of small sessions with one or two musicians at a time in a well-ventilated studio with masking and so on. We were careful of course, and everyone acted very responsibly.

RMC:  Why did you decide to record two versions of two different songs on this CD?

Moshe:  These things are not really decided. They come about for various reasons. The two songs you are referring to are: “Simkha L’Artsecha,” and “In My Life.” Simkha was tracked in 2005 as an instrumental; but, my brother mentioned he would like to hear it with the nigun (melody) sung to the words from the liturgical text. It was easy enough to do, as it did not need to be re-tracked, only a vocal track needed to be added. So the instrumental ended up on the secular disc and is called “Joy to Your Land,” while the sung version was placed on the second disc (Liturgy Lane) and called by its Hebraic name, “Simkha L’Artsecha.” About “In My Life,” the two versions are identical except that the vocal track is sung in a Hebrew translation on the second version and titled “Biy’mei Hayai” (The Days of My Life).

RMC:  The liner notes in this CD are very informative and there are also some great photos including one of you in 1975. What would the Moshe Denburg of 1975 say to the Moshe of 2021?

Moshe:  I think he’d say: “I’m proud of what you’ve become!” I don’t say this haughtily, only that back then, my path was unclear, and in fact, my life was much more fragile.

RMC:  What is next for Moshe Denburg and Tzimmes?

Moshe: There are always possibilities. In the near term, I see us continuing to provide musical services of various kinds, and as the pandemic subsides, we hope to do a belated CD release concert, or simply call it a celebration of Tzimmes’ 35 years. Speaking for myself, in the longer term, it would be nice to see Tzimmes continue with some next-generation musicians, to carry on the tradition of original Jewish music-making in Vancouver.

RMC:  Where can folks find additional information about the CD?

Moshe: The simplest way is to visit the Tzimmes website: www.tzimmes.net.

A lot of info is there, including liner notes, sample tracks and links to our distributors, Bandcamp and oySongs.

Julian Taylor has followed up his Juno-nominated ...