This song features the four core Sultans, as well as an incredibly talented and inspiring special guest: Juan Carlos Medrano, who co-wrote the music with the band and sings his original lyrics, as well as performing on gaita, the traditional flute.

Originally from Cartagena on the north coast of Colombia, Juan Carlos moved to Canada in 2006 as a refugee.

“It was tough back home, lack of opportunity for people like me, people that look like me, Afro-Colombian,” said Juan Carlos. “We were not comfortable with the system, the rules, and how they treat their people.”

He knew from the time he was 15 that he would leave Colombia, even though it’s the place he loves most on Earth. 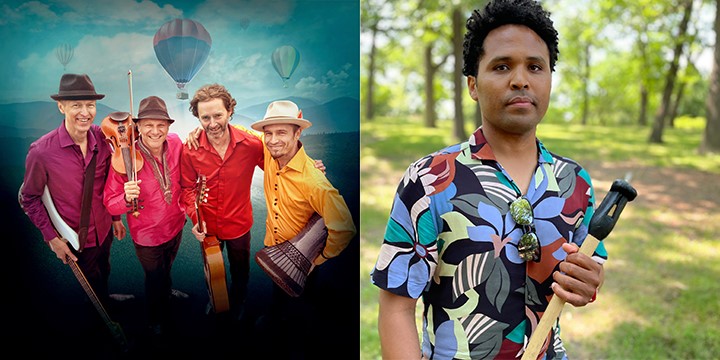 “I love the culture; I love the music; everything,” he said. “But in my head was the idea that I need to leave this place because I want more…

“Internal peace, and being happy doing what I love — that was to go to school, to go to university… To just make it to university was a big deal.”

Juan Carlos likens existence in his home country to living in a concrete jungle, “where you have to survive, where you don’t think about … You don’t plan,” he said.

“People like me, people that look like me, we don’t plan,” he continued. “We just live day by day and are looking for a future.”

On “Mi Santuario,” Juan Carlos expresses in his lyrics how everyone doesn’t have the luxury of utilizing the legal immigration process like he did. “I’m screaming ‘run, run’ because the immigration is coming, and they are coming sometimes to kill you, because no one sees anything on the border.”

Juan Carlos is an educator, having attended York University to become a teacher.

“It’s time for me now to give back to this beautiful country,” he said.

“Back home, people don’t talk about native people, Aboriginal people, or how they struggle inside this beautiful country. So the way for me to pay back [is to] inspire these little kids. And my main goal is to bring music, to bring art together, and give these kids hope.”

“Mi Santuario (feat. Juan Carlos Medrano)” is released in standard stereo as well as Dolby Atmos and also kicks off a new Friday lunchtime livestream series led by producer Chris McKhool and band members — with Juan Carlos as the first guest; Backstage with Sultans of String is a free series that features in-depth connections, behind the scenes footage, fan interactive conversations, up close and personal stories and live music.

“Mi Santuario (feat. Juan Carlos Medrano)” is the first single off Sanctuary, the highly anticipated eighth album from Sultans of String, and the second instalment in their Refuge project. The first, simply entitled Refuge, was heralded as “a fantastic, moving, dreamlike, epic, timely album” by Ken Micallef (Jazz Times, Stereophile, Downbeat), and won many awards, including Producer of the Year at the 2021 Canadian Folk Music Awards for bandleader and violinist Chris McKhool.

This ambitious, diverse, inclusive and passionately political album puts the band face-to-face with a VIP roster of global ambassadors, some of whom are recent immigrants and refugees to Canada, as well as important Indigenous voices. All are masters of world music that communicate with each other through the global language of sound.

“The larger Refuge project is centred around the positive contributions of refugees and new immigrants to Canada,” Chris McKhool explained. “We are bringing in special guests that are newcomers to this land, as well as global talents that have been ambassadors for peace. We wish to celebrate the successes of those who make the journey here and bring their extraordinary talents with them, in this case music. Each one of us has a remarkable story to tell, and we are excited to share the beauty of these collaborations with you.”