Songs for the Revolution: Scott Cook’s revolutionary soul takes to the road 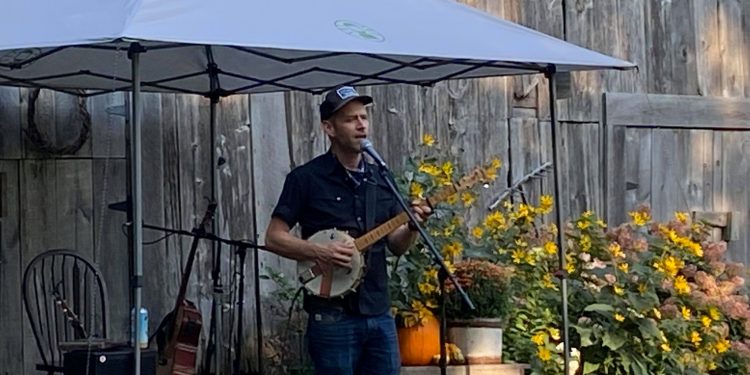 The weather was looking a little uncertain, but Paul Kent’s invitation was clear: rain or shine, troubadour Scott Cook would be performing this Sunday in Hamill Creek.

Songs for the Revolution, wanted to experience Scott Cook’s revolutionary spirit up close, so that meant a road trip.

Scott Cook was winding his way towards Smith Falls for the 19th show on a tour that began Aug. 1 in Driftpile, AB.  The tour would continue down through Michigan and on for another 29 shows into November.

If you’ve not heard of Scott Cook, Scott is a singer-songwriter from Lansing, MI, who for years has drifted across this continent in a van playing show after show after show.  His songs are carved from his heart and his experience, beautifully woven tales, backed by equally well-crafted acoustic guitar stylings.

An Ottawa-based singer-songwriter I know, Paul Kent had invited me to the show.  A close friend of Paul’s and mine, songwriter Howie Hooper had recently passed away, which had brought Paul and I together to preserve some of Howie’s last works.  I knew attending this Scott Cook outdoor house show that Paul had so thoughtfully arranged would be a healing experience.  (Keep your ear to the ground for more on the release of Howie Hooper’s music.)

The sun was shining as I made my way up from Ottawa, and pulling off that country road to park in a tall grass field, it was clear the setting was perfect.  There were church pews at the back of a barn yard and bubbles of lawn chairs and blankets on the grass for a couple family’s with young kids in front of the stage.

There was a cute stand at the back with chips, water and pastries, and a colourful tablecloth covered an old wooden table for Scott’s merch: years of CDs and his most recent Tangle of Souls. The CD’s liner notes had gotten a bit unwieldy and turned into not just a CD release, but a also a book release. 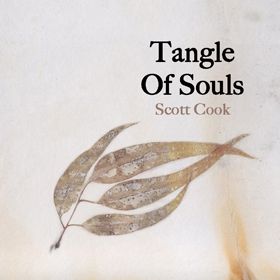 Paul Kent opened the show. He was a little nervous at the start but quickly settled into his opening song, a classic anthem, “One Tin Soldier.” He capped his short set with a tribute to our late friend, Howie Hooper, with a favourite song of his, “Little Windows.”

Paul introduced Scott by saying, “If Woody Guthrie was alive today I believe he would be like Scott Cook, touring from town to town sharing his songs.” Scott took that lead and opened with his song that references Woody Guthrie in a tale of trails, the lead track on his 2017 release Further Down the Line.

This little farmhouse just outside Smith Falls truly provided the context for these tales that felt as though some sprang from childhood dreams on the Michigan farm he grew up on.

His American roots rang through strong and true on “Oh Say Can You See,” an observation of the recent political and social landscape in the US. 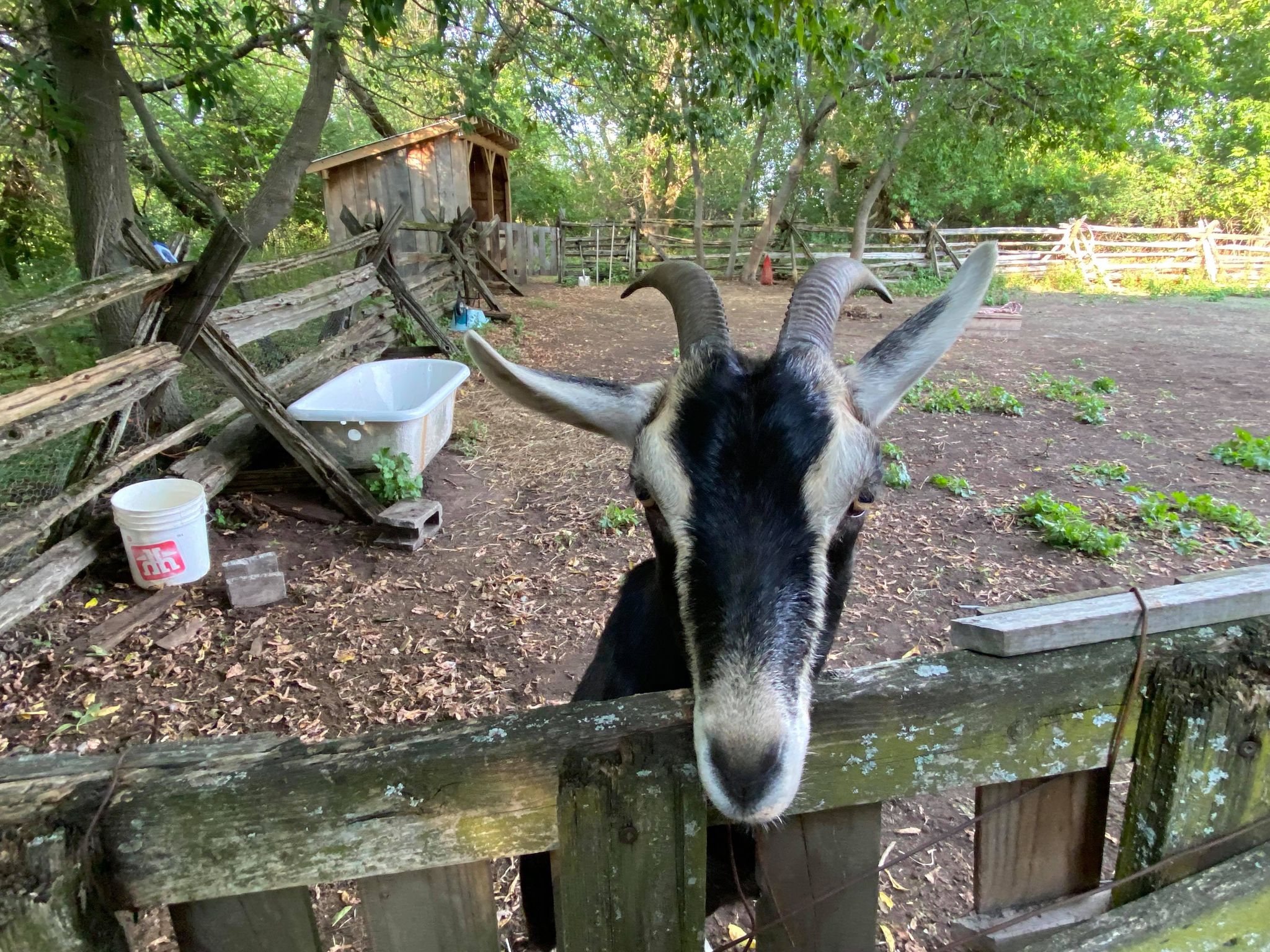 There were some odd looking ducks at the show, literally, as well as a goat and a truly pretty pony in the back pen. The attendees were a diverse group, young and old, at one point in the show a two-year-old started a staring contest with Scott.

This first set was a nice introduction to Scott, his warmth, his connection to his family, and his skill at painting a vivid personal picture through song.

He ended the first set with his beautiful guitar song “Pass it Along,” a reminder that we don’t own our possessions; we are simply the caretakers of those finds.

During the short intermission, Scott signed books and CDs and chatted with the guests. 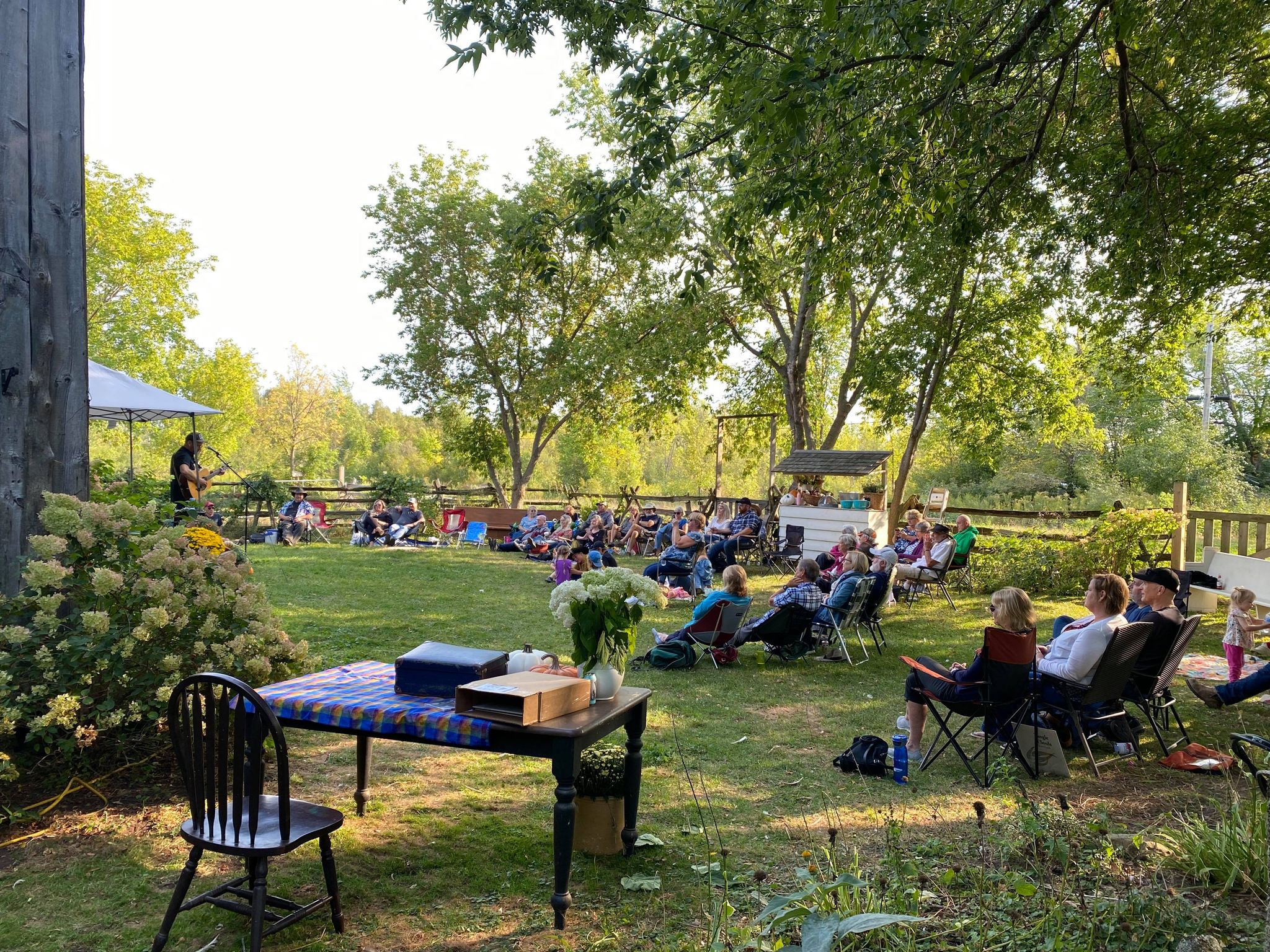 There was a heartfelt song about his grandfather that described his stubbornness sweetly, as only a grandson could.

You get to know these people in Scott’s songs and empathize with them and understand them. Through that, we learn a little more about ourselves.

At one point in the show, the audience reluctantly agreed to a sing-along. The song was a good one, poking fun at the men, while truly questioning when the men are going to step aside.

Scott ended with “While the Party’s Still Going,” and with that, the weather had held, and it was time to depart..

Leaving this farm on such a beautiful day in September, after finally, finally being back experiencing a live show with other people and with the sun setting in the sky, I just have to say, I felt lucky today!

For more information and to follow along with Scott in his travels sign up for Scott’s travelogue at www.scottcook.net