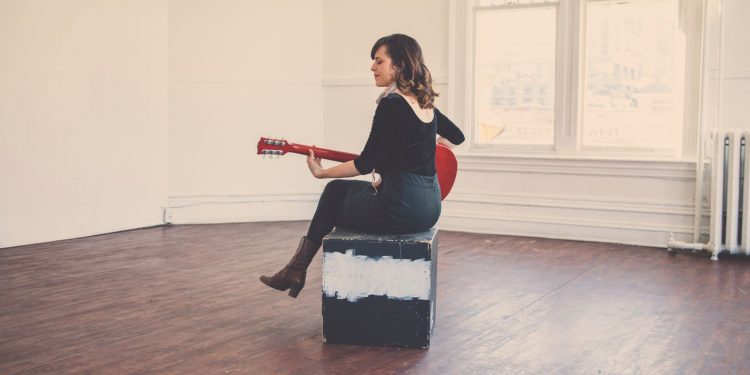 When you’re writing just for the sake of writing, without any pre-determined outcome, it’s surprising what can come out. You can discover some hidden truths you might not connect with otherwise. Case in point is Caroline Marie Brooks’ new solo album, Everything At The Same Time. The Good Lovelies band member couldn’t get together with Sue Passmore and Kerri Ough to work on new songs, as they’ve done since they formed the trio in 2006.

“I’ve known for a long time I’ve wanted to make a collection of solo songs,” she said. “I felt like I had a freedom to write what I wanted to write, without this pressure for it to go anywhere. I wasn’t thinking about, ‘Oh this is gonna go on a record, or my audience is going to like this song.’ I really just wrote these songs for myself. That was very liberating because I felt deeply connected to them for no other reason than they just poured out of me.”

The album title refers to the situation in life Caroline, and so many others, find themselves in. They’re raising a young family while at the same time increasingly looking after aging parents.

“I definitely feel I’m in this sort of magic zone, a magical part of my life,” she explained. “I can remember my mom at my age now. I have memories of being a little kid and my mom being who I am now in a way. I do talk about that a little bit in some of the songs about my parents. A lot of the songs are centered in parenthood in this very specific time. My friend and I were talking yesterday about the expression, ‘The days are long and the years are short.’ That is really the thesis of the record. There are doldrums every day, but there’s magic in it as well.”

The trick for all of us, no matter what our age, is to recognize the magic and acknowledge it to ourselves. Usually that realization doesn’t come until years later when we look back and reflect on that time.

“It’s so fleeting, and it’s happening so fast, Caroline said. “I’m watching my kids grow before my very eyes, and it’s so beautiful and so terrifying all at once. It’s kind of where the title of the record comes from. It’s all there. It’s like a big mix of feelings all the time with these little guys, you know?”

Caroline’s new album isn’t just a look back for her though. She looks forward towards what’s in store for her family.

“One of the things this record gave to me was a gift in learning to be present and spending time thinking about how fleeting (life) is and being really in it. I think there’s a real beauty in that and a beauty in the sadness of life too. One of the songs is called, “Garden Song,” and I really laid it out, thinking about death and mortality. Maybe this album is my mid-life crisis! I did turn 40 this year so this is a big part of the record,” she said laughing.

Not only does family play a big part in the lyrical narrative of Everything At The Same Time, Caroline’s parents and siblings took part in the sound of it. That’s not surprising since they were a musical act during her formative years.

“If I’m writing a record about the fleetingness of life and family and stuff, I can’t not have my family be on it,” she said. “It was a beautiful experience. My brother, my sister and mom all sing on different songs. My mom and sister sing in unison with me, and it’s uncanny, I had a friend say, ‘I couldn’t even hear that it was your sister or mom.’ We have the same voice so it’s very freaky.”

One of the highlights of the album is the instrumental “Song For Fred,” which features the guitar work of Caroline and her dad.

“It’s sort of inspired by his guitar playing, and I wanted him to play on it with me, so I wrote this second part for him to play. He embellished it and made it super beautiful. I’m really pleased with how that turned out.”

Helping Caroline create the soundscapes for the album was her old friend, Ottawa-area musician and producer Jim Bryson.

“Years ago, he asked me to sing and play guitar in his band, which was very formative for me,” she said. “Being in his band was so much fun. I mean it was the loudest band I’ve every played in! My little folkie self learned a lot. But when I was thinking about making this record and the amount of trust I would have with someone with this kind of material, I knew Jim was the guy. I think he has a beautiful sensibility. I’m so enamored with the sounds he found on this record, and I knew from knowing him that he’d be the right person to trust.”

Caroline wanted Everything At The Same Time to be a co-production, so that was another reason Jim was the right one to work with.

“I wanted to do a lot of it myself, so I wanted somebody who would mentor me,” she explained. “Jim helped me get set up with home recording. I was able to record a bunch of stuff remotely, like my dad’s guitar parts and my mom and sister singing. I think Jim’s a very under-rated songwriter in this country and a very under-rated producer too. It was the right partnership for sure.”

The ability to record at home now has opened many possibilities for Caroline’s creativity.

“I’m sure that over the next year and a half I will keep recording and making as much music as possible because that’s the joy of my job,’ she said. “Things have been so challenging [during] COVID in terms of performances. Being able to be creative and to actually make music has been the best thing about the last year and a half.”

For more on Caroline Marie Brooks and Everything At The Same Time, go to carolinemariebrooks.com.

Why J.P. Cormier may never return to ...