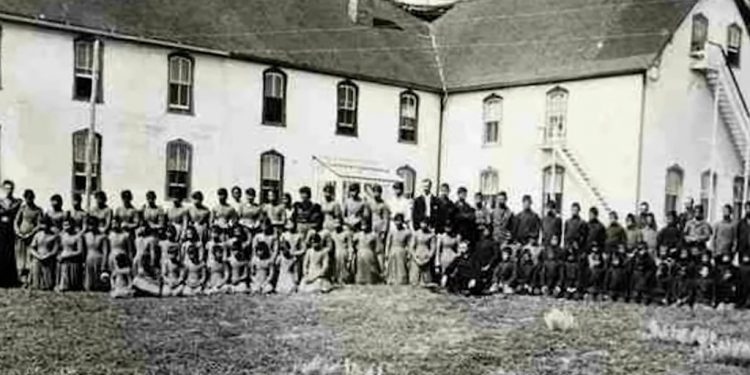 For decades now, Indigenous artists have been bearing a burden that should rightfully have been bourn by the Canadian government:  the burden of educating Canadians about the atrocities of Residential Schools – and indeed about virtually all aspects of Canada’s shameful treatment of Indigenous peoples.

For those willing to listen, the music of artists such as Buffy Sainte-Marie, Robbie Robertson, Willie Dunn and the generations who have followed them, has long been a source of truth for those who have been denied it by their school systems and government.

Today is the first annual National Day of Truth and Reconciliation, a new statutory holiday – in most provinces – to honour the lost children and Survivors of residential schools, as well as their families and communities.

The day was created in response to Truth and Reconciliation Commission Call to Action #80, which calls for a statutory national day of commemoration.

In honour of today, and of the artists who have carried the burden of telling the truth for so long, here are five songs that in different ways address the truth of the Residential School experience.

The Indian Residential Schools Crisis Line is available any time for Survivors who need help at 1-866-925-4419.

This is a brand new song from the Juno-winning duo and also a brand new release on Ishkode Records, the new Indigenous music imprint co-founded by the duo’s ShoShona Kish.

“This song is rooted in our families’ experiences of being stolen away to the horrifying institutions called Indian Residential Schools,” ShoShona and Raven wrote on their Facebook page. “In the name of denominational gods, each of our generations have grieved children among the growing list of 6,000+ buried Indigenous bodies. We feel these crimes in our bones, in the blood that flows through our hearts. …

“Music grounds us, music is mishkiki. We sing for our Ancestors’ past, present and future. We sing for healing, for the lost ones, for those who have lost their way, for the wrongs to be right, and for lighting of the the 8th Fire.”

We posted this on Roots Music Canada last week for the first time, and it’s been hit more than 4,500 times since then – and yes, that is an outrageously large number of hits for a Roots Music Canada story in a single week.  So clearly, we weren’t the only ones who were emotionally walloped by Tom’s unflinching lyrics.  Tom is well-established as a talented actor and humanitarian, known for his role on TV’s North of 60 and for founding the Huron Carole benefit concert series for foodbanks. He’s always had a recording career as well, but this song is definitely a stand-out in his body of work as a singer-songwriter.

Juno winner Jerry Alfred is himself a residential school survivor, and this song is his response to the experience, largely sung in his native northern Tutchone language. Though he was designated a “Keeper of Songs” at birth, Jerry spent much of his early adulthood immersed in land claim negotiations for the Selkirk people and only began devoting more time to music when that agreement was secured in the mid 90s. His work combines traditional songs and musical styles with influences from North American pop and folk artists, such as Bob Dylan.

This beautiful and haunting number by classically-trained mezzo soprano Rhonda is climbing the Indigenous Music Countdown as we speak.  She actually released it in November 2015, and it was nominated for an Indian Summer Music Award for Best Spiritual and a Native American Music Award for Best Historical.  The song was also scored for a symphony and performed with the Winnipeg Symphony Orchestra.

Long before Gord Downie heard the story of Chanie Wenjack and turned it into a multimedia project called Secret Path, Willie Dunn immortalized Chanie in his song “Charlie,” released in 1978. Relatively few people outside of Indigenous communities showed much interested in hearing it back then, but with the release of a new anthology of Willie’s work, Creation Never Sleeps, Creation Never Dies, more people are discovering and taking an interest in his body of work.