“La Ziguezon”: 40 plus years for this call-and-response song celebrated on film 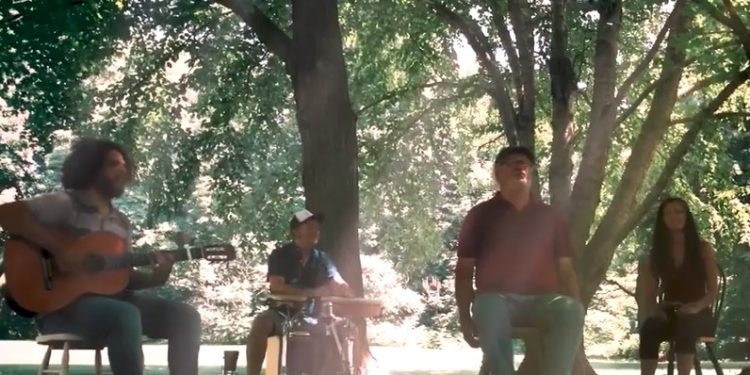 Jean Desrochers, artistic director of Festival Memoire et Racines in Québec, got a brilliant idea this past summer. He put a group of five superb singers from diverse cultural backgrounds in a park with huge trees with two camera operators and a sound technician and asked them to sing “La Ziguezon,” an iconic piece of traditional music.

This call-and-response song has been a central part of the folk music repertoire in Québec for more than 40 years. It was recorded by the legendary band La Bottine Souriante on their third album: Chic & Swell (1983), and it is well-known in French-Canadian communities across Canada.  “La Ziguezon” was introduced into the repertoire of La Bottine Souriante by venerable folk musician Normand Miron, who had learned it from his own mother. It now has a new life with musicians and singers from diverse communities taking it into a new generation.

In this short film, “La Ziguezon” is sung with minimal guitar and percussion accompaniment.  André Marchand, the original Québecois singer who popularized it on the recording by La Bottine Souriante, sings it again here with the steady beat of his foot percussion. With him are Brazilian guitarist, composer and arranger Isaac Neto; singer-songwriters Andreé Levesque Sioui (Wendat First Nation) and Mamselle Ruiz (Mexico); and percussionist Éric Breton (Québec). Their diverse origins give the song a new depth, continuing on in a new incarnation from its unknown roots more than 40 years ago.