Songs for the Revolution: They Tried to Pave Paradise 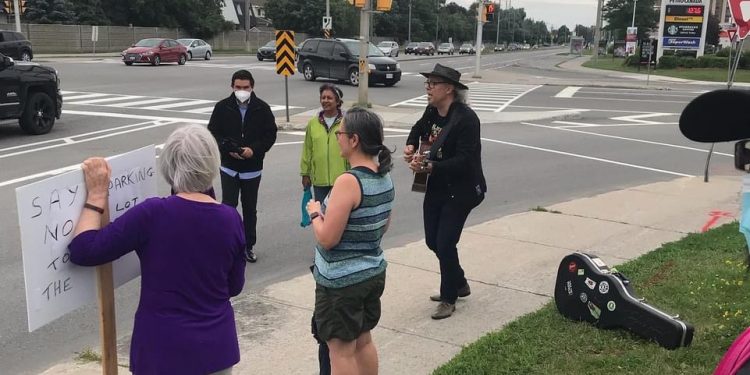 A couple of months back, I was out for a run in a forest close to where I live here in Ottawa.  As I exited the forest and made my way up to the main road, I saw people with signs walking towards me on the sidewalk. I stopped to speak to them, and they explained that a local car dealer was seeking authorization from the city to build a parking lot in the forest. I was speechless.

For years, this majestic grove of evergreens has been a small space in our community where we can walk, we can run, get exercise, ride bikes and walk dogs. We go there through all seasons for peace and respite.  This is a sacred space for those who live in this area.

And it was not looking promising,  Otto’s BMW dealership was serious.  They had a favourable environmental assessment and a consultant representing them in their work with the city.  They were well organized, and having operated in Ottawa for decades, were adept at navigating the waters at City Hall.

I ran home, the lyrics of “Big Yellow Taxi” – “They paved paradise and put up a parking lot” – running through my mind. I got home from the run, joined the Save Hunt Club Forest Facebook group and signed the petition

The next protest, I was there, guitar in hand, in front of the BMW dealership.  A few others were out with their signs, including a couple of other musicians.  We took turns with the guitar, trading protest songs, songs about the environment and details on what we knew about this situation.

The protest schedule was Saturday afternoon’s at 4 and weekdays daily from 8 a.m. to 9 a.m. Horns were honking as people passed. The signs read “Honk to save the trees,” “Save the forest,” “Respect existence or expect resistance.” One of the attendees had little pieces of paper printed with the Facebook group information she passed out to drivers as they stopped at the lights. 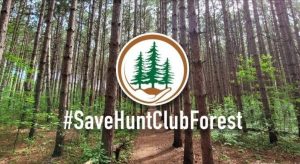 My first day out at the protest, I met Manuel Costa and Christine Johnson. I realized these people were serious, and I asked them to sign me up to be a part of the Google group that was meeting by Zoom each week.  I offered to lead a creative group to discuss ideas.

After a couple of meetings we had a music rehearsal planned in the forest, and I was circulating lyrics to “Big Yellow Taxi.”

Despite a knee injury, Romani Bays, a guitar player, rented a wheelchair to join us.  Susan McArthy offered to haul her upright bass in to the forest. Jason Dubue and Kitty Dubue offered help coordinate and to video the event along with others covering other odds and ends.

We had close to 40 people show up to sing “Big Yellow Taxi” in the forest.  My daughter agreed to help with the video. People brought their kids, percussion instruments, their voices and enthusiasm. It was a great community gathering, and within a couple of weeks we had a produced video:  https://www.youtube.com/watch?v=Ugwkb7yQjw4&t=7s

This generated interest from other communities in the city fighting to preserve green spaces.  Singer-songwriter and CKCU Canadian Spaces host Chris White, who was supporting our work, had organized a rally to protest the proposed Civic Hospital expansion location at the Experimental Farm and invited me to join them.  This provided opportunities to share information and strategies and grow momentum and exposure on these green space-related issues in the City.

The Monday Zoom meeting became more and more political as we too familiarized ourselves with City committees, public consultation processes, zoning, and the various jurisdictions we’re dealing with.

We dealt with signs being confiscated and the police being called to a rally held at Walmart. A website was developed and a huge wooden sign made to promote the cause. Close to 20,000 people signed the petition. Nature walks were held to identify tree species and eventually some of us began calling the dealership directly to voice our opposition.

Finally, on Monday Aug. 23, we’d gone overtime on our weekly Zoom call when we got a message from our City Councilor Riley Brockington, asking if he could join our Zoom. He had an announcement to make. Otto’s BMW was suspending their re-zoning application to look for alternative solutions.

We were so excited to get this news!  We made them blink!  Finally after three months of pressure we made some progress!

The next day, the protest continued out front of the trees, with a different focus.  Now in our sights: the Airport Authority and the federal government as we make our final push to have that little tall pine forest protected in perpetuity.

Never underestimate the power of a community and a song to defeat misguided capitalist, corporate interests.