What happens when some of Canada’s hottest old-time musicians jam for the first time in a year? Adeline 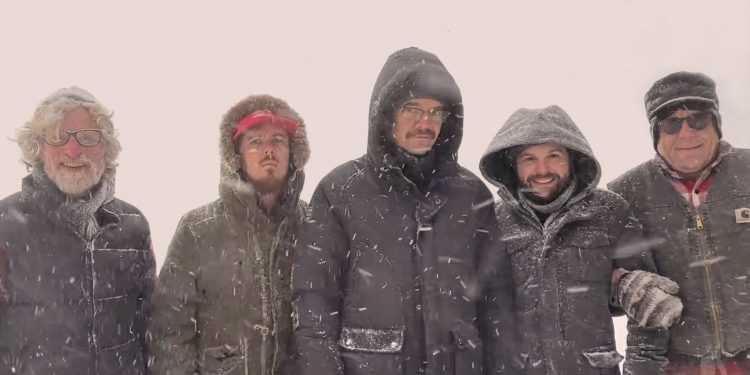 The phrase “use it or lose it” is usually associated with recreational athletes who may have stopped exercising or playing sports for awhile.

But it can also apply to musicians who haven’t been able to perform for over a year. Yes, I’m talking about you, COVID-19. So when a quintet of old-time musicians gathered in March of this year at John Showman’s cabin in Ontario’s Kawartha region for three days of recording, there was the chance of being faced with the adage “too much too soon.” Sure enough, it all proved to be too much for Sam Allison’s calluses.

“We went at it hard,” said banjo player Chris Coole, who, along with John and Sam, was joined by Adrian Gross (Slocan Ramblers) and Mark Kilianski (Golden Shoals). “We were sort of playing all day and all night. All musicians over the past year have tried our best to maintain a practice schedule, keep sharp and force yourself to learn more stuff. But it’s hard to play bass by yourself. You have to be fairly disciplined to be practicing bass by yourself, so a lot of the bass players I know have lost their calluses. It’s not just Sam. [So] after a day and a half of constant playing he got to the point where, with his fingers, he couldn’t play anymore. [But] it was actually a happy, lucky serendipitous thing because Sam’s a great bass harmonica player and probably for old-time music, the best. So he had his bass harmonica there, and we used that on a couple of cuts, which are super cool. It really adds an interesting, almost frightening vibe to the tunes.”

The gathering of these five accomplished musicians and the resulting album, Adeline, was the brainchild of John Showman and Chris Coole of the Lonesome Ace Stringband.

“Me and John sort of talked about it,” said Chris. “We played over the last summer and fall because we’d been off the road. You could have the odd outdoor jam session with one person, so I had a chance to play with Adrian more last year than I ever had, as well as John. Mark Kilianski is from New Jersey originally but his partner is in Toronto, so he sort of relocated up here, so I had been getting a chance to play with him. Sam (Sheesham & Lotus) I hadn’t played with in a while, but me and Sam have known each other forever. We had so much fun playing with these guys, [we thought] it would be awesome for all of us to do it together. We realized the times had given us a unique opportunity to do that. So we got in touch with everybody, and everybody was super game to do it.”

Planning for the project began last December with multiple emails exchanged while they determined the repertoire. Initially planned for Chris’ cottage in May, they settled on John’s cabin in March because Mark wasn’t available in May, plus John’s cabin was winterized with a furnace. Once they were all settled in, the quintet set about playing.

“The second tune on the album, ‘Shelvin’ Rock,’ I believe was the first thing we played together. We just arrived, and three or four hours later, we set up the mics, got everything going, and we burst into this really badass tune,” Chris said. “It was the first time any of us had played music in an ensemble in pretty much a year. It was magical! We’re lifelong musicians. I’ve been a full-time musician for 30 years. The thing I’m use to doing is playing music with other people. The other guys are the same. We’re all ‘band guys’; we’ve always been in bands playing ensemble music.”

The “windows” method of playing back-up

In the genre of old-time music, the fiddle is front and centre with the other instruments providing the rhythm to drive it along by playing the same accompaniment throughout the tune. For Adeline, Chris, Sam, Adrian and Mark took inspiration from John Hartford’s “Windows” system for back-up.

“Most people think of him as a songwriter and banjo player, but at the end of his career, he got really focused on old-time music and playing fiddle. He wanted to perform and play in the stringband setting, but he brought this really interesting idea to it,” said Chris. “He wanted it to change a little bit like Dixieland music. Duke Ellington had a version of this as well, where every eight bars, the back-up texture has to change. So if you just strummed and played the chords, you gotta do something different. You can drop out completely, you can play one note, a bass line, a harmony, all these things you were allowed to do. The background texture ends up being very improvised. It’s almost like there’s an arrangement to every tune but the arrangements are totally improvised on the spot.”

Chris and John have used the concept of the “Windows” system in the music they create with Max Heineman in the Lonesome Ace Stringband but it’s their first time using it in a larger configuration.

“It really makes everybody have to be very present in the music,” Chris said. “You can’t just go on autopilot. It’s almost like the back-up is as much the lead as the lead, which in old-time music is the fiddle.”

Since each back-up musician is always changing what they’re doing, it can produce some interesting soundscapes.

“You keep your eyes on people, but you can’t be totally sure what’s going to happen,” Chris said. “There’s definitely spots where I dropped out, and Adrian dropped out, and Mark dropped out at the same spot! But that’s cool. Then there’s a bass and fiddle playing for a while. It was like a freedom thing as much as anything else. On one hand, there are rules, and on the other hand, there are no rules.”

With all five members committed to their respective bands, the Adeline album is destined for now to be a “one-off,” but one with fond memories for Chris.

For more information on Adeline, go to: www.adelineoldtime.com.