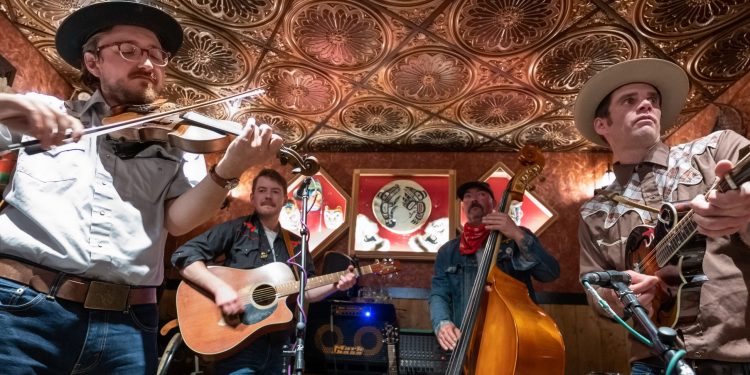 Although it’s natural to assume bluegrass and string band music is the soundtrack to life in the American South, the stories told in those songs are not specific to one region, and in fact often extend to the most unexpected places.

The Lucky Ones hail from the Yukon, the territory we all know was made famous by the Klondike Gold Rush. That rugged spirit lives on in a lot of the music created there, music that members of The Lucky Ones heard through their parents, who heard it from theirs. It’s the sound that filled barrooms and taverns, and brought people together for barn dances and kitchen parties. Now, The Lucky Ones are bringing it to the ears of their generation.

Appropriately, The Lucky Ones’ self-titled debut album kicks off with a song called “Fool’s Gold,” which could have be written a century ago when men came north to seek their fortunes. At the same time, its message reflects every boom-and-bust era that has come since, while providing the finest example of the group’s collective songwriting approach. Those players are the core group consisting of singer/guitarist JD McCallen, singer/guitarist Ian Smith, singer/mandolinist Ryan West, banjoist Aaron P. Burnie, and fiddle player Kieran Poile.

Half of the band first got together in Dawson City as the Klondike Sons, playing three nights a week at the Midnight Sun Hotel, and later the infamous Westminster Hotel (aka The Pit). After moving from Dawson to Whitehorse, they slowly hand picked other musicians from the area until they were ready to debut as The Lucky Ones—the name inspired by Alistair MacLeod’s novel No Great Mischief—at Whitehorse’s 98 Hotel, filling in regularly for legendary Yukon fiddler Joe Loutchan.

The songs began coming after that, including an ode to their home away from home, “The Old 98,” “Waiting On A Paycheque,” which Ryan West wrote after a long day of painting houses (and played that night by request in exchange for one on the house), and “Everybody Dance,” JD McCallen’s co-write with his then two-year-old daughter.

That sense of family and community is inherent to the entire Yukon music scene and feeds The Lucky Ones’ creativity. As McCallen said, “The isolation is a blessing and a curse. On the one hand, I don’t feel like there’s any pressure to compete, but on the other, there’s not a lot to compete for. In the north, it’s not out of the question to travel six hours for a gig. But it’s such a beautiful place to live and make music; everywhere you look is a goddamn postcard. And stories, there’s certainly no shortage of stories.”

It is indeed those stories that are at the heart of The Lucky Ones, which was recorded at St. Paul’s Anglican Church in Dawson City. That same weekend, they played a Sunday gospel set for the congregation, the perfect complement to the album’s “Saturday night” feel that’s exemplified by its closing number, “Drunken Goodnight.” It’s a song about sometimes having to let your friends make mistakes with their relationships in the hope that they’ll figure it out. However, there are no issues when it comes to the musical bond the members of The Lucky Ones share.

Like their peers, Old Crow Medicine Show and Gillian Welch, The Lucky Ones’ reverence for tradition is balanced by a drive to write in their own voices. And as soon as it is safe to do so, they will be bringing those stories of the north to the rest of the world.

The Lucky Ones’ self-titled debut album is available now on all digital platforms and at theluckyonesmusic.com.

3 acts to catch during the virtual ...