Songs for the Revolution: Buskers for residential school survivors 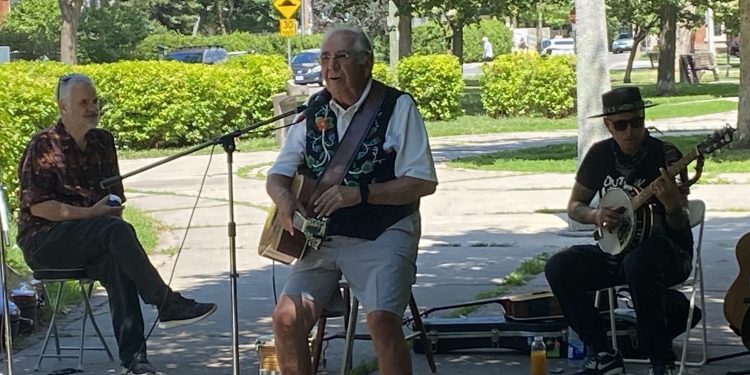 This month, with National Indigenous People’s Day this past Monday,  Songs for the Revolution is highlighting a benefit that recently took place in support of Residential School Survivors.  As an ally, I want to acknowledge that this article is being written and the event itself took place on traditional unceded Algonquin Anishinaabek territory.

It was a perfect spring day, a light breeze blowing, birds singing and the warm sun shining through the trees in Minto Park as people gathered for the Busking for Residential School Survivors concert in the park.

Community leaders Tony Belcourt and David Finkle had gathered a mix of musicians from Almonte to Kitigan Zibi to converge here in Ottawa to perform at this important and timely benefit.

The show got started just after noon. Tony Belcourt, the first president of the Native Council of Canada and a recipient of the Order of Canada, welcomed everyone and spoke of the important work the Residential School Survivors Society is involved with (donate at http://irsss.ca).

The show kicked off with the house “busker band” that included David Finkle on upright bass, Mario Prudhomme on guitar, Anthony Brascoupe on fiddle, Ken Kanwisher on cello and accordéon and myself, Christophe Elie, on guitar.  We got things going with some traditional fiddle songs. 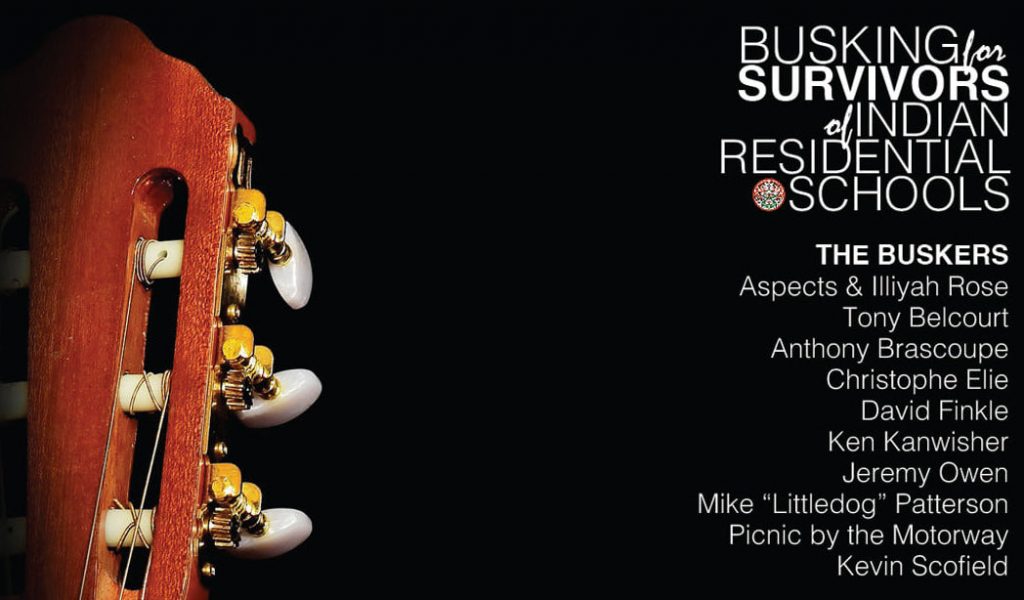 Mike “Littledog” Patterson, a jazz guitar player, arrived by cargo bike that carried his beautiful Godin Electric guitar and powered amp.  Mike provided some exemplary lead support to the band, from his spot situated within the audience.

The park setting was perfect. People brought lawn chairs. Some of those walking or riding through the park stopped, laid down on the grass for a while or sat at the picnic tables, park benches or chess tables.  Cars going by the park would slow down to listen. Parents danced with their kids down the sidewalk.

Local businesses like Long and McQuade, Al’s Steakhouse and the Lieutenant’s Pump, Zak’s diner, Elgin Beer Project, Pure Kitchen, The Standard and Stay Gold – Detroit Style Pizza, stepped up with various types of support, some pledging to donate a percentage of sales and some matching donations with gift certificates. By Monday $1,784.40 had been raised for the Residential School Survivors Society.

The artists donated CDs to be sold, with the funds to be contributed.  There were even traditional tobacco seedlings originally propagated from a 400-year-old Prayer bundle that were being offered for donations.

It was an inspiring afternoon of music that included a performance by Picnic by the Motorway who played some lovely tunes, Denis Raymond shared, among others, the song “The General.” a request from the audience that inspired more dancing. I also had the opportunity to perform a few of my originals for the audience, including my hopeful song for the people of this land, “Two Feathers.” 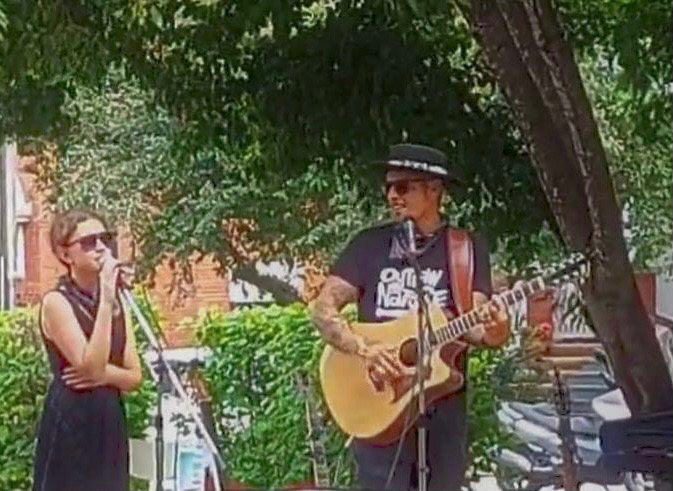 The highlight though was the youth. That included a debut by the youngest member of Picnic by the Motorway, Sofia who performed “Don’t Dream it’s Over.” Aspects’ performance with his young daughter, Illiyah Rose, who will soon be releasing a new single, was another standout.

As the shadows stretched across the grass, we knew this gathering was coming to a close.  But there was still time for more music, more enlightenment.

Kevin Schofield, a Residential School Survivor himself, took to the stage with the Busker’s Band.  Kevin opened with some traditional songs.  He also spoke of his recent experience at a vigil by the flame at Parliament Hill, kneeling and weeping, in order to comfort a new immigrant to this land after she heard of the grave of the 215 children uncovered at the residential school in Kamloops.

Schofield, known as “Tennessee Cree,” for his booming Johnny Cash-like voice, shared traditional Indigenous melodies and his original songs that conveyed both the hurt of his past and his faith in humanity.

This early post-full-Covid-restriction outdoor live music event brought smiles to a lot of faces after the long Covid winter we’ve all endured. Funds were raised for Residential School Survivors, while increasing awareness of the past, as Canadians are awoken to a part of this land’s history many of us were taught little about.

The afternoon’s finale was led by Amanda Fox with her pink drum malet on a traditional dearskin drum in the singing of a travelling song, wishing all who attended a safe journey home.

The Tragically Hip – Saskadelphia; why ...