The Tragically Hip – Saskadelphia; why roots fans make an exception for the Hip 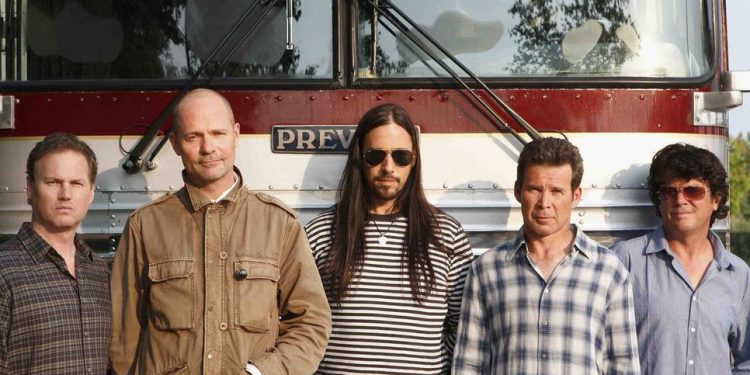 The Tragically Hip have never fitted into a roots music genre.  Their guitar-driven rock sound generally has always hugged the centre-line of the rock ‘n roll highway.  The nightly cover of “Train Kept-a Rollin’” – frequently introduced as “a song for Mr. Johnny Cash” but borrowed from the Yardbirds, was about the only nod to folks on the right of the dial.  And make no mistake, the dedication was purely for the shared metaphorical use of the rolling train.  Folsom Prison Blues was never in the repertoire.  And if they’re not in the roots music bailiwick then why are we covering them at Roots Music Canada?

Historically, the Hip’s ability to connect to the collective psyche of Canadians of all stripes makes any new Tragically Hip project worthy of a few inches.

The band retired after the final show of their Man Machine Poem tour in August of 2016, with lead singer Gord Downie battling a brain tumour that would ultimately take his life in the fall of 2017.  Their legacy, spanning 32 years, is indelibly imprinted on the soul of the nation.  The final concert was a cathartic national celebration unrivalled in likely any country’s history.

Now almost five years later, Saskadelphia – a collection of early recordings thought to have been lost in a fire – is released.  It features six “new” songs, five recorded live-off-the-floor during the Road Apples sessions in 1990, and the sixth, a song written in the same era, recorded from a concert in December of 2000.  And although the recordings capture an immature work-in-progress Hip, they provide a perfect snapshot of the band that would become Canada’s favourite sons, and a band that could shake the roof off any arena in the country.  As Rob Baker noted in discussing the record, “I went ‘WOW’ when I heard ‘Ouch’ after all this time; we were a pretty good little band.”

The songs reflect the earliest days of the Hip, barely reaching three minutes, urgent, driving, rock and roll carved from The Animals and The Pretty Things, revved up twice as loud, twice as fast, and twice as much fun.  Several cuts are well known to long-time Hip fans, having been featured regularly in many early shows.  The tunes “Crack My Spine” and “Just As Well” feature prominently in tapes and bootlegs from the early 90s, traded by die-hard fans, from the famous Misty Moon concert in Halifax that was broadcast on MuchMusic to shows at the now defunct 86 Street venue on the old Expo lands in Vancouver. Quite literally coast to coast, the band brought everything they had on every night, in every town.  It was that commitment to their fans, to the entire nation of music lovers, that makes the Hip Canada’s band – not the imagery and lyrical touchstones, not the stereotypical politeness of the band members, and not some imaginary connection to the impossibilium of the Leafs ever winning the Cup again.

Hailing from Kingston, ON, the band emerged from childhood and teenage friendships – the ultimate high school band success story.  Original members Gord Sinclair (bass) and Rob Baker (guitar), along with Gord on vocals and Johnny Fay (drums) ripped open 1985, before the resurgence of roots rock and country originalists, and in stark contrast to the keyboard and synthpop that dominated the early 80s.  The lineup was finalized in the fall of ‘86 with the addition of second guitarist Paul Langlois.  The fledgling Hip invaded every bar, club, restaurant and lounge in a 100-mile radius, some of which had never featured live music, but figured they better get in on this while the getting was good.  The origins of Saskadelphia reach back to those very first days – “Reformed Baptist Blues” was played in live shows from late 1985, and all through 1986, complete with saxophone solo.  The band thunders through the track to close Saskadelphia, showcasing the tight, layered sound of their early days, and then leaves a tiny snippet of studio chatter from Gord on the tape, like a whispered secret that makes you think things haven’t changed.

It’s simultaneously nostalgic to listen to these early recordings and uplifting to absorb the energy of a band that provided the soundtrack to the lives of countless Canadians over the intervening 30 years.  For folkies, country and bluegrass fans, blues music aficionados, and all the roots music fans in Canada, we make an exception for the Hip.

Songs for the Revolution: Buskers for ...