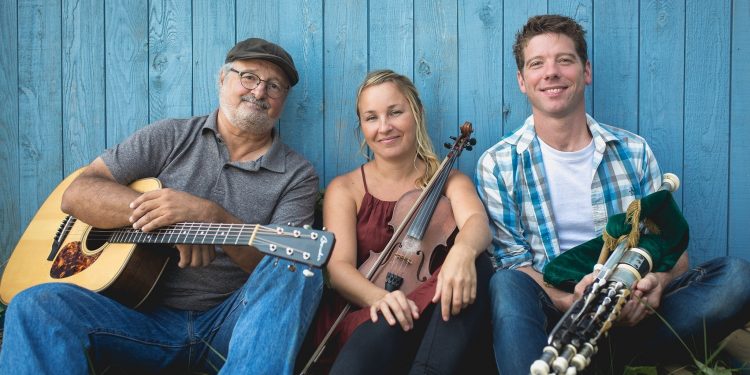 When is a debut album not a debut album? When it’s the album Le Bonhomme Sept Heures/The Bonesetter by the trio Grosse Isle.

Comprising fiddler/singer Sophie Lavoie, Uilleann piper Fiachra O’Regan and veteran Québecois guitarist/singer André Marchand, the trio first worked together on Sophie and Fiachra’s 2016 album Un Canadien errant where André was hired to provide guitar accompaniment. What followed two years later was the release of Portraits under the name of Sophie & Fiachra plus André Marchand. Speaking from his home in Montreal, André explained how he first met Sophie.

“About six years ago, Sophie was invited to be a Programme d’Artiste en Residence in Joliette. Then they asked me to mentor her and guide her around to meet the musicians. I’d seen Sophie before because she played with another band called, L’Attisée who came to Festival Memoire et Racine in 2001, I think, but I didn’t know her then. So we spent a whole month together, meeting musicians and playing tunes. Fiachra was still in Ireland for the first two weeks and then came back with their children. We started to play music at the festival, and they talked to me about that first album I did with them. We had a lot of fun and just continued. We’re now at our third album and six years together. It’s very enjoyable for me.”

That first album was well received by critics and listeners alike and was nominated for Best Album of the Year in 2016 at both the ADISQ and Canadian Folk Music Awards. Sophie and Fiachra’s other albums together were 2010’s Sophie & Fiachra and 2014’s Rewind. How the two of them connected is an interesting story in itself.

How things have changed since the days of La Bottine

Sophie and her sister went to Ireland just to travel and play some music,” André explained. “This is where she met Fiachra. She actually lived with him for five years in Ireland. After five years they already had one child, and they decided to come back to Québec and bought a house around here, so we’re actually neighbours! It’s great.”

André Marchand’s place in the traditional Québec music scene is well established after 40 years. He was a founding member of La Bottine Souriante and Les Charbonniers de l’enfer. He was an in-demand sound engineer and director along with being in the Marchand-Miron-Ornstein trio, and he collaborated with multi-instrumentalist Gray Larsen on a couple of albums. This gives him a unique perspective on the current state of Québecois music.

“When we started with La Bottine in the mid-70s there was not much in the media. There were no festivals. There was not much happening. It’s very different today because we have some kind of underground network that developed that’s very strong. There’s a lot of festivals, a lot of platforms where traditional music is seen. So there’s more exposure and a more organized underground network that exists. But in the media, it seems to be absent! So this has not changed at all. But for all kinds of reasons, La Bottine Souriante certainly influenced a generation of young people that wanted to play that music. Now today, there’s a lot happening in traditional music without any prejudices. They just love the music. So there’s more energy, and it’s more alive than there was in my time.”

The new generation of trad players

One aspect of the current crop of young Québecois traditional musicians is that many of them are the offspring of the first wave of players.

“Exactly and I know them all!” André said laughing. “They’re wonderful musicians. Some of them are in a place where they are more influenced by traditional music but do their own stuff. There’s another bunch that are really looking for the older repertoire. There’s something happening that was not happening in the 70s and 80s.”

Grosse Isle’s repertoire is a mix of traditional tunes and songs from both Ireland and Québec along with original tunes from Sophie Lavoie.

“Sophie is a brilliant composer,” André said. “I don’t know where it happens in her brain but she understands the language of the old styles. It actually happened a couple of times in the sessions when suddenly I would hear a tune and say ‘Oh, I’ve never heard this one’ and then realize it’s one of Sophie’s compositions. Another guy who was great to do that was Claude Méthé, who was in “Le Rêve du Diable.” He composes tunes you’re sure are old tunes.”

The recording of Le Bonhomme Sept Heures/The Bonesetter not only blends traditional Québecois and Irish music, it also fulfills a longtime dream for André’s friend Michel Faubert, who has always wanted to sing with a Uilleann piper.

“The month before Christmas [Michel and I] decided to make a tune each day that we would release on Facebook. At some point, Michel was listening to what [Grosse Isle] was doing and said, ‘I have a song that you could sing,’ and we decided to put it on the record. We had so much fun doing it, and he was so happy to finally play with a piper.”

The future for Grosse Isle is looking good. They’ve collaborated with La Compagnie du Nord, which is the booking agency run by the band Le Vent du Nord.

“We hear that the album is already on the radio in Ireland!” André said. “We’re open to travel to the States. This is what we hope, and we’re certainly available to do that. It’s quite extraordinary when we tour. Most of the time Sophie and Fiachra’s children are there. It’s very energizing for me. They’re wonderful children, and they’ve been travelling with Sophie and Fiachra since they were born, so they’re incredibly good travelers. It’s a lot of fun for me, definitely.”

For more information on Grosse Isle check out grosse-isle.com.