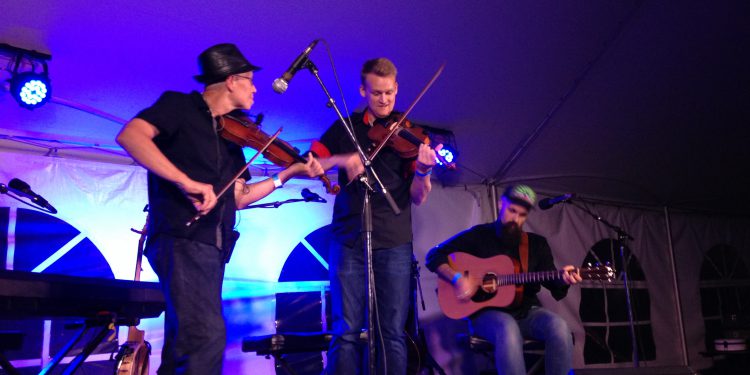 It’s epic. Not only do we have a two disc set from the Posse here, but a newly minted Canadian too.

Dyed in the wool Vermonter Tristan Henderson, married his Québecoise sweetheart and moved to Montreal last year (yes they had a cross-border COVID wedding), so we have a new Canadian in this awesome New England band.

The trio has been playing together for years, getting better and better, playing concerts and dances all over the USA and Canada. Prior to the pandemic, they were most in demand playing for contra dances all over the continent, but also were hot on the folk festival circuit. They hope to pick up where they left off in the coming post-pandemic world, and this new CD is hot off the press and ready to spin.

These three fabulous musicians are tight together, easily finishing each other’s musical sentences, and with great finesse.  This new two CD set is full of sprightly intertwined melodies that make you intuit that you just have to move.  You would never know that there is an entire generational age difference in the band. All three seem like they’ve been playing together for their entire lives, and their humorous approach draws in their audiences, they are so obviously loving playing together.

As well as great instrumental music here, there are songs – including giant three-part harmonies that draw heavily from the tradition of shape note singing. These are three male voices that are infinitely suited to each other, and the sound they make is often pretty heavenly, especially on pieces like “The Angel Gabriel.”

Pete’s Posse members are no strangers to making their music significant. They are absolutely passionate about life, the universe and everything. There are songs of both political protest and spirituality, and they bring issues of environmentalism and the threat of global warming to life. These are musical messages that hearken back to the times of the great folk musicians like Woody Guthrie and Pete Seeger, and the Posse brings them forward into the light and existential perils of this new century.

Some of the pieces on this recording evoke old-time American music. Others draw from the huge tradition of Québecois traditional music. The band is equally at home with the unexpected rhythms and chords of Scandinavian music as they are with bluegrass and old time. And just wait until you hear the twin fiddles of Pete and Oliver riff off each other. They are nothing short of amazing together.

And, each of the members of Pete’s Posse is a composer in his own “write.” During this past year, with its periods of enforced isolation, the band members have taken the time to explore musical writing in a vastly deeper way, but also got together to work on their shared passion. Pete, Oliver and Tristan had a creative retreat in Arizona; they produced a number of livestreamed concerts for their fans;  and they worked in studios with contributions from 12 other brilliant musicians on this recording.

What else can we say other than this: “Ya Know, Ya Never Know!”  After you’ve given it a listen, you just know you gotta love it!  We simply can’t wait to hear them live again.

There are still a few spots left ...

Producer Chris Birkett teams up with … ...