Jamie Oppenheimer reflects on the passing of Michael Laderoute 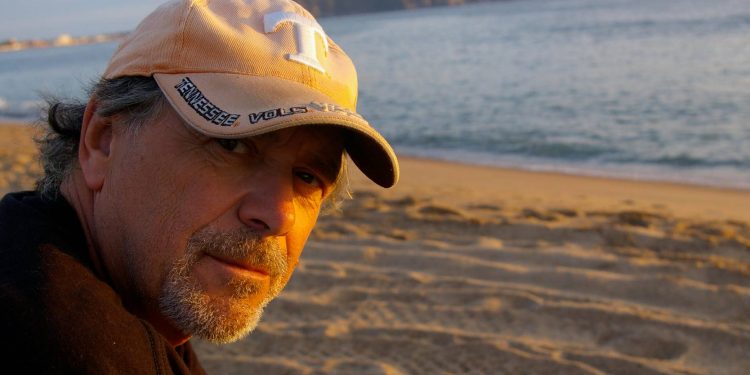 I always thought it was strange when members of the clergy spoke at funeral services about people they did not know. At best, they might recite some biographical information and impart a few bits of personal information gleaned from family and friends, but they speak of souls they did not really know. I’m about to do the same thing, commenting on a fellow songwriter whom I only knew for a short time, and mostly through contact on Facebook. That said, I want to acknowledge someone I think is one of Canada’s better songwriters, but one who may not be a household name among music fans.

I only met Michael Laderoute once, four or five years ago up near our home in Burk’s Falls, ON. He performed at one of our monthly Third Friday Coffee House shows at the Burk’s Falls Legion. A mutual friend, Jim McQuaig, introduced me to him after his set. As I often do at those gatherings, I recorded Michael’s performance, and I was impressed by his original songs. As a fellow songwriter, I found his songs to be meaningful, well-crafted, and sung with the confidence of an experienced performer. He seemed so comfortable with and adept at entertaining a room full of people. He was a pro.

Sometime later, while visiting Jim McQuaig and his partner, the very capable poet Karen Shenfeld, Jim gave me a CD of Michael’s songs entitled A River I Know. I’d asked Jim to give me suggestions for Toronto songwriters to feature on my show, because I knew he was well acquainted with that community. Michael’s CD was one of his first recommendations. For the next several years, I included some of those Laderoute songs on my Lyrical Workers radio show, and the more I listened to those songs, the better I liked them.

I discovered that Michael was gravely ill about six months ago, after I’d learned that a tribute album of his songs had been produced by some of his musical colleagues. Entitled Michael Laderoute: Our Friend it is a collection of 16 of Michael’s best songs, sung and performed by some very talented musicians and songwriters.  In my opinion, there is no more fitting tribute to songwriters than to have their talented colleagues cover their songs so well. Some of the artists are better known than others, but all the covers shine. Exuding from each and every one of those performances is an indescribable respect and energy.

When David Olney, another songwriter for whom I have great respect, passed on during a performance at the 30A Songwriters Festival down on the Florida Panhandle in 2020, I started to write a song entitled “Dying to Be Heard.” I have recently completed it, and it is my tribute to all the worthy yet under-recognized troubadours in the world who, with their insightful and eloquent songs, forge meaning from our confusing and often discouraging world. Though talented, many of those artists will never achieve the recognition they seek, and such is the sad reality of the craft. Especially in the past year, two seemingly opposing things have happened to me. On the one hand, I have had trouble focusing on whatever mundane task is at hand. At the same time, I have discovered and become more receptive to a universe of great art that I had previously overlooked. I am becoming a better listener and observer, and when something is really good, I appreciate it more than I used to. I can’t seem to make oatmeal without burning the pan, but I can more intently listen to a song that moves me. This painful and universal “time-out” has afforded me the opportunity to re-examine my priorities, and they are decidedly changing. At 65, I am beginning to pay more attention to the concept of legacy.

As a songwriter, I once aspired to widespread recognition, but I have finally realized that this is a lofty ambition. The field of good writers is ever expanding.  After five years hosting a radio show about songwriting, I have encountered so many diamonds in the rough and come to realize that much of the best music never reaches a large audience. It gives me great satisfaction simply to be a tiny part of a vast community of artists who write remarkable songs. These days, I’m a little humbler about my own status in the hierarchy of that community. When the stars align and the muse visits, musicians and songwriters have the rare power to unify and bring joy to wildly divergent populations simply by presenting their renditions of the truth. That is powerful stuff. Michael Laderoute was, in my opinion, one of those guys. By all accounts, he was a good man, a good friend, and a well-respected songwriter. Everyone I’ve spoken to about Michael has the same uplifting story to tell. They speak of his kindness, his generosity, and his talent. I am happy to have met him, albeit briefly. I wish I’d had more time to get to know him better and to learn from him. Thankfully, I have his songs to remind me of who he was. Michael, thank you for those songs. R.I.P.