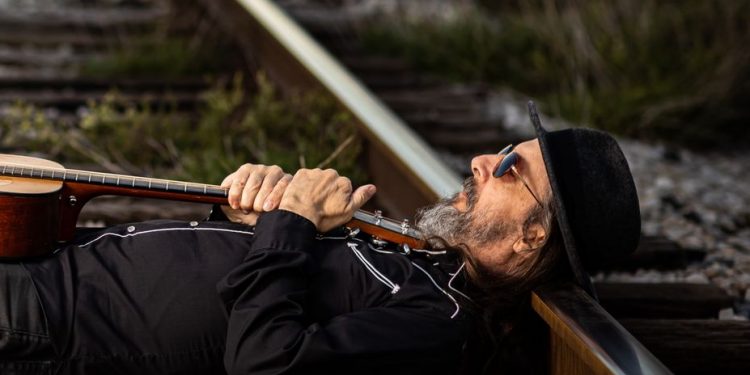 Barry James Payne has a special place in our hearts here at Roots Music Canada because, apart from being a fine singer-songwriter, he also prompted us to enter the domain of Spotify playlists and created our Contemporary Folk and World playlist.  (Watch for more playlists coming soon, by the way!)

Barry, who performs as String Bone, has just released a new single called “Waitin’ for my Dyin’ Day,” which is a swampy, country-noire number that continues in his tradition of walking in the shoes of downtrodden vagabonds bravely into the fray of collapsing love – with tales of criss-crossing the country and taking downtown back alley shortcuts.

In this case, a mysterious character on the brink of the breaking point desires mercy in life, and in death.  A stranger’s kind word or a stroke of good luck are enough to reveal the power to push on, creating the euphoria of discovering renewed life force.

“I’m alive!” soars the song’s chorus, as it moves from bleak darkness into bright illumination, ending with a repetitive plea for mercy.

The song was written with Lucifer, the Netflix TV series in mind, and if you’ve ever watched that show, in which the devil incarnate helps the police fight crime, you’ll be able to imagine it fitting right in.

Barry has been writing music and performing live for four decades now and has released two full-length String Bone albums, nadir (2009)  and Love & Highways (2016), along with an EP, several singles and some videos. In the last two years, String Bone has received over 200,000 streams and views across all platforms globally, reaching 100,000 streams on Spotify alone.  Barry has performed in Europe, the USA and across Canada.

“Waitin’ For My Dyin’ Day” is the first single from String Bone’s anticipated third full-length recording, Coping Mechanisms, which was recorded and engineered by Barry at his home studio.