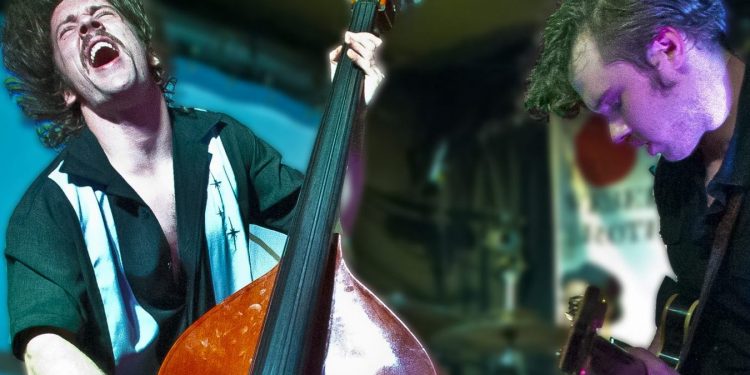 Anyone who has followed the Weber Brothers over the years likely knows their story well, but it always bears repeating. In the early part of this new century, when Sam and Ryan Weber were still teenagers, they decided to follow through on their long-held idea of playing with Ronnie Hawkins, just as so many of their musical heroes (specifically the Band) had.

The brothers boldly traveled from their home near Baltimore, MD to meet Rompin’ Ronnie at his fabled residence in Peterborough and, needless to say, the man who brought rock n’ roll to Canada was suitably impressed by the Webers’ chops, not to mention their similar ambition to trek north. After passing through Ronnie’s “Rock ‘n Roll Boot Camp” over the next several months, they fulfilled their dream of becoming full-fledged Hawks – Sam on guitar and Ryan on standup bass – adding renewed energy to Ronnie’s time-tested stage show.

Since then, the Weber Brothers have been engaging their own personal rock ‘n roll revival, releasing new, original material on a regular basis that’s displayed their evolution into a true roots rock force within Canada. They’ve just released their 13th album, Choose Your Own Adventure, made in partnership with an old Baltimore friend and collaborator, Timothy Bracken, that finds the brothers expanding their musical range further into Beatles-esque psychedelic pop.

But as one of the album’s standout tracks, “Toys In The Junkyard,” demonstrates, The Weber Brothers’s strength will always be their innate grasp of rock n’ roll’s raw essence. Now, two decades since their arrival in Canada, The Weber Brothers are in a position to show a new generation what rock n’ roll is all about, and to pass on what they’ve absorbed, not only from Ronnie Hawkins, but others they’ve shared stages with, including Chuck Berry, Levon Helm, Leon Russell, Willie Nelson, Merle Haggard and even Motorhead’s Lemmy.

As Ryan Weber has often said, “If it’s looked at as a passing of the torch or a keeping of the flame, then we’re the guys to do it.”

Choose Your Own Adventure is available now on all digital platforms, and on CD and vinyl from weberbrothers.com