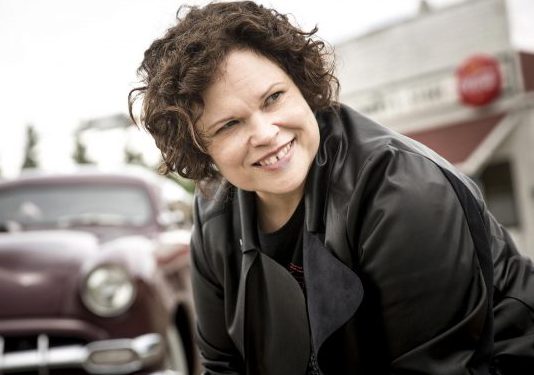 In December of 2019, Edmonton-based blues singer-songwriter Kat Danser was in Havana, Cuba. In May of that year, she found a musical thread to the blues called Trova, which could be referred to as the roots music of Cuba.

She successfully applied for some research grants to learn more about this music but wanted to base her research in Edmonton through dance classes or Spanish lessons. With no success, she turned to a local cigar store, La Tienda Cigar Shop.

“I’ve always been a cigar smoker in secret,” she said, speaking on the phone from a Tim Horton’s drive-through (Extra large tea, toasted apple-cinnamon raisin bagel with strawberry light cream cheese please). “Even my wife didn’t know I smoked cigars! But anytime I was down in Mississippi, it was moonshine and cigars. I had this kind of like secret life almost. So when I came back from Cuba, I decided to come out of the closet as a cigar smoker and became the first female member of a cigar club in Canada. It was quite a trippy experience. I went down the rabbit hole with tobacco and stuff.”

Many cigars later, Kat wrote the songs for her new album, “One Eye Open,” in an upstairs room at La Tienda. Which brings us back to December 2019 in Havana.

“Within 10 hours of being in Havana, I’m receiving my first music lesson from world renowned tres guitar player Pancho Amat,” she recounted. “He’s taken me on as a student! About 10 hours later we’re having supper at [a] restaurant [when] the head of the musician’s union came in to meet with Pancho. Through the process, it wasn’t Pancho vouching for me or the music; it was my knowledge of Cuban cigars that ended up getting me a cultural visa so I could go back and record and continue to spend time with Pancho! From there, I started really getting serious about Spanish and learning the tres.”

The initial lockdown put an end to Kat returning to Havana as planned, while also having an impact on the actual recording of what eventually became One Eye Open.

“We had planned three times to record this album,” she said. “We had the funding in August of 2019, then we lost the funding in September, so I wrote the album, and then we lost that album. Then I got word the funding was back on for December [and] re-wrote the album. In January, we learned again that the funding had been cut. Then we got funding from another source, so we booked flights, and we were all going to be in Vancouver together [with] Gary Craig, two musicians from Nashville in addition to Steve Dawson, our Vancouver team and me [from] Edmonton. Then we had to cancel that because of COVID lockdown. So, I literally wrote the album three times! This last one, I finished the album the day before we went into lockdown in Alberta in March of 2020.”

The lockdown required Steve to resort to an extensive “Plan B” approach. His engineer, Sheldon Zaharko, sent Kat a laptop with the needed software installed on it. Kat then converted her office space into a recording studio. Once everything was set up, Sheldon was able to control Kat’s laptop remotely from Nashville. Recording the bed tracks consisted of Kat in Edmonton, Steve Dawson and Jeremy Holmes in Nashville and Gary Craig in Toronto, all being able to hear but not see each other.

“It was trippy,” Kat said. “The entire thing is really an auditory recording. Usually when you’re in the studio you have all sorts of visual cues, and you can speak to each other in a certain way. With this, it was completely auditory. Often when I’m in the studio I can see where they’re going, and I know where I’m going and can anticipate what’s going to happen. In this case it was such a beautiful organic response to the recording process. It really changes the game.”

The recording of the horn section used on the album also involved internet technology with the players together in Vancouver, Steve Dawson still in Nashville and Kat on Zoom from Edmonton.

“When I first watched [the movie] Minority Report… I was like, ‘Oh man, I won’t see that in my lifetime!’ right? And before you know it, I am the computer screen on a pedestal in the recording studio, and I’m watching and hearing the horn section, they’re looking at me, and we’re talking about approaches and blah blah blah. It’s so bizarre. And at the same time, the engineer is recording this. Steve’s tuned in from Nashville. Steve and Sheldon are working together on the recording software, and I can see on my screen the adjustments they’re making. It was so weird!”

One Eye Open is comprised of eight originals, including “Mi Corazon,” a song Kat wrote to reflect how much Havana changed her and to give us a clue into how Kat’s music will be developing. But there are also two important covers on the new album, Jessie Mae Hemphill’s “Get Right, Church” and Gus Cannon’s “Bring it With You When You Come”.

“Jessie Mae Hemphill is one of the most unknown names in North Mississippi hill country music,” Kat said. “She’s the grand-daughter of Sid Hemphill who was one of the first people Alan Lomax recorded in Mississippi back in the 1940s. She shows up from 1940 onward but doesn’t get recognized by white male academics until the late 1970s. You know, as a woman in the blues, my roots of oppression are different from Jessie Mae’s, but certainly we have some intersections in terms of being women in the blues and trying to express our life experiences. ‘Get Right, Church’ seemed very appropriate to our current times. Gus Cannon was known as ‘Banjo Joe’ back in the early formation of roots and blues music in the early 1900s. He lived into the folk revival movement of the 1960s. I chose ‘Bring it With You When You Come’ because I wanted to highlight the incredible role he played in shaping what we now understand as roots, folk and blues music in America.”

In fact, Kat’s dissertation for her PhD was mainly centered around Gus Cannon, and she’s currently working with the City of Memphis, TN to create a marker commemorating Cannon’s contributions to music.

To find out more about Kat Danser and her new album, One Eye Open, go to: www.katdanser.com.

Shannon Dooks eliminates all ‘Doubts’ on her ...

We featured Frank Patrick’s ‘Mercy’ in the ...