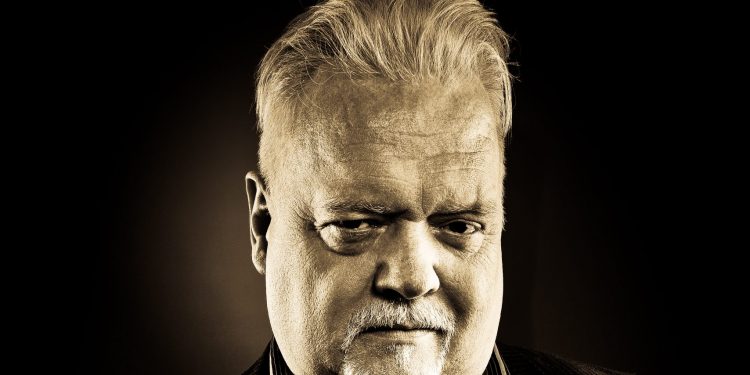 In the 1950s, the Grand Ole Opry in Nashville wouldn’t allow drummers on stage during their nationwide radio broadcasts. In fact, drums were frowned upon in country music in general as being “too loud” or “not pure” One legendary story has western swing artist Bob Wills having to hide his drummer behind a curtain at the Opry in 1944. Entering into this environment was Ernie Newton who became the Opry’s “house” bass player and an in-demand session player at Nashville recording studios. To get a percussive sound to his playing Ernie attached a drum skin to the upper part of his standup bass and hit it with a brush while playing his bass at the same time. You can hear his “brush bass” sound on countless hits of the 50s. Today you can hear that basic concept taken up to the Nth degree on Alec Fraser Jr.’s new album, On the Wings Of The Wind with his innovation, “the circus bass”.

“I fell onto my thing [in] kind of a different way and then discovered Ernie afterwards,” he said. “It was one of those, ‘Hey, I guess great minds think alike or something.’ I played with different fingers, and I incorporated ‘slap’ bass to it and certain muting things. [Then] I added a snare with real snares, stuck a mic on it, and since then it’s developed into seven different drum sounds attached to the bass. I’m using mostly the basic drums of a drum kit that are attached to the upright bass, and it’s electrified. When you put it through a PA it sounds like the real deal. It was really hard to describe what it was because it certainly wasn’t what Ernie had invented. Although I like to think if he was alive and saw what I was doing, he might give me the thumbs up. At least I hope anyway.”

Throughout his 50 year career in music, Alec Fraser Jr. has played with a wide range of artists, from Bo Diddley and Ian Gillian of Deep Purple to Ron Sexsmith and Jeff Healy. He has two Maple Blues awards as Bassist of the Year to his credit. His work as a producer has won 23 additional awards (Junos, American Blues Foundation etc.) in a variety of musical genres. But aside from three albums put out by the duo Fraser/Daley with Mike Daley, Alec has never released an album of his own until now.

“It transpired because I had the time because of the pandemic,” he explained. “It’s something I’d been putting off for a long, long time because I was so busy. I have a recording studio, so I set it up and thought, ‘I’m going to try writing the record’. That was it really, just having the time. I wonder where [the time is] going to go if we get back to playing again, if my life is going to be as busy as it was before. But I had a lot of fun doing it. It was definitely therapeutic.”

A couple of the songs on On the Wings Of The Wind were already on hand and just needed a bit of modernizing but the majority of the songs were brand new.

‘a both sides of the Atlantic kind of record’

“It’s not like I wrote a ‘pandemic record,” Alec said. “I kind of wanted to stay away from that… But there are hints here and there, and references to certain things that I felt about the whole thing. Even the title represents to me being picked up and dropped somewhere you weren’t expected to land. That happened to me as an immigrant when I was 11 from Scotland to Canada. It happened again during the pandemic that all of a sudden, I’m not working, what’s going on here? The title song is like a tribute to the people who were helping, the beacons of light who were singing [and] trying to help others rather than being the problem.”

While Alec is primarily known for his work in the blues field, his tastes run the full gamut of styles. There are some songs that take him back to the “old sod” of Scotland.

“Celtic music, and folk music in general, has been a big part of my upbringing just from being born there,” he said. “Coming to Canada and getting a good dose of North American music really brings a whole other thing in. I guess it’s like a ‘both sides of the Atlantic’ kind of record. Or people can just think I have an identity crisis! But it’s mostly the eclectic tastes I have and music I love to listen to, regardless of where it’s from. I don’t want to be pigeon-holed into one kind of music.”

‘You’re just a white boy lost in the blues’

Alec’s exploration into the blues started when he was 11 and his father bought him the album, Sonny Terry & Brownie McGhee in London. Later at age 15, Alec had the occasion to see Sonny and Brownie at the Riverboat Coffeehouse in Toronto’s Yorkville area.

“That was a big turning point”, he said. “I got to meet them too! My friend was doing the door, and he asked me if I wanted to meet them. They were very nice and encouraging. I think they liked the fact that younger kids were getting into hearing their story and the blues. Brownie said to me, ‘You’re just a white boy lost in the Blues,’ but he meant it in a nice way. Muddy Waters said the same thing to me a couple of years later at the Colonial Tavern. I think it might have been a line all the black blues musicians were using. I think they appreciated it. That’s the feeling I got anyway. Muddy said, ‘Don’t try and copy me. You find your own Blues and you sing it. That’s how it works.’”

Now that the first solo album is out, Alec does have plans for a second, although exactly when that will happen is very much up in the air.

“My mind is going in a few different directions right now because I really don’t know what’s going to happen once we get [back] to playing again. The great thing with Fraser/Daley is that we were mostly playing private parties, so I’m sure that will come back at some point. Right now, after taking a year to make a record, I kind of want to take a bit of a break from it. It was a fair amount of concentration and work. And a bit of a learning curve for me too. I’m a producer and a musician mostly. I don’t know that much about making a solo record, but I certainly did find out certain things while I was doing it. One of the things I really learned is that CDs aren’t completely gone. There’s a lot DJs and media that want that still. I wasn’t offering that [with this album]. It was all an online venture. I mostly made the record for myself, but I felt obligated after I did it to get it out there. I think on the next one, I will make some CDs – maybe 300 just for the people that really want it.”

As for that follow-up album, whenever it may be…?

“I’m thinking one of the kinds of records I want to do is a blues record,” Alec said.

To find out more about Alec Fraser Jr. and On the Wings Of The Wind, go to: alecfraserjr.com.

The Ottawa Grassroots Festival has announced this ...