When Al Parrish isn’t play music, he’s promoting co-housing. Check out what he has to say about it 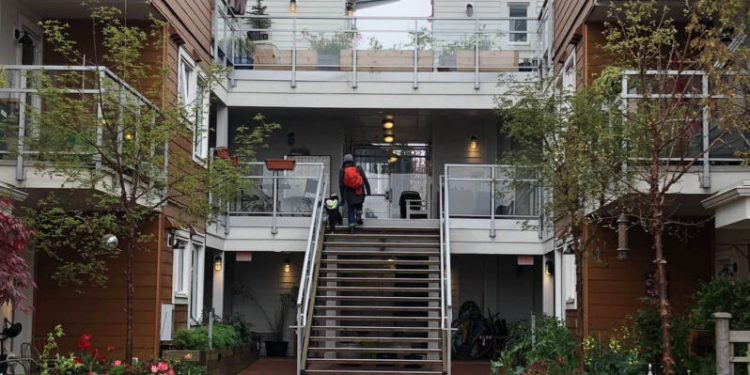 She ran into our house shouting, “I never want summer camp to end!” That was my partner’s reaction to our neighbourhood. She felt the same kind of joy, freedom, and friendship in the place and with the people who lived around us that she had felt as a kid at summer camp.

I like to work on social justice, so I write songs about a former US president (who shall remain nameless), about BLM, about civil rights leaders’ choices, about a pending revolution, and less-weighty stuff: enjoying a perfect day or developing perspective during a pandemic. When I’m not writing, playing or listening to music, I think a lot about the fairly open-ended topic of creative living, which always reminds me of our time living in that “summer camp.”

What made our Ithaca, New York neighbourhood so fun? We knew all our neighbours really well – not just a “mailbox wave” kind of knowing. Pretty much every day, somebody would ask if we wanted to take a walk, come over for coffee, talk politics or play music or dominoes. Would we like them to take our two-year-old for a swim? Want to get together and have a drink or a big neighbourhood barbeque? We were very involved in many social activities with lots of people in the neighbourhood, because communities are all about people. Of course, lots of nice neighbourhoods have great people, but our “summer camp” had more.

We had a 3,500 square foot common house with a commercial-grade kitchen and a big dining room where we had shared meals available three times a week; in that kitchen, we had fresh goods supplied by local farmers. We could grab organic tofu or free-range eggs whenever we wanted and pay for them on our monthly maintenance bill. The Common House also had a guest room that any of us could use simply by signing up on a shared calendar. There were offices, reading rooms, a kids’ playroom, re-use room, teen room, yoga studio, laundry facilities, and a cold cellar. Outdoors we shared a one-acre swimming pond and a 10-person sauna, fruit trees to eat from along the foot paths that ran between our houses, a bike shed, recycling shed, and community gardens. All these things were jointly-owned and maintained. One of my favourite ‘shared amenities’ was the community’s sandbox which was right outside our front door. It was a zen spot for me: in the evening, after all the kids had gone home and off to bed, I would often go out, pick up the toys and rake up the sand so everything was ready for the next day’s play. We shared all kinds of stuff (e.g. why would 30 homes need 30 lawn mowers?) but it wasn’t about having stuff, it was about sharing with our neighbours, because communities are all about people.

I am enthusiastic about community, so it often comes up in conversation. The reaction from many people is, “Sounds very nice. All that sharing is great, but it’s really not for me. I need my privacy.” No problem! “Summer camp” has that, too. There were 30 households in our neighbourhood, each one complete and self-contained with a kitchen, living room, dining room, bathrooms, and bedrooms. They were really well-designed so a three-bedroom, one-point-five bathroom home of a little over 1,000 square feet populated by two parents and two kids, didn’t feel small. We could comfortably put a dozen people in our living room/dining room to play or listen to music. If more people showed up, we could just move the party a few steps down the path to the common house. Which brings us back to the sharing.

The social time and activities we shared were amazing. But we shared more than just “fun.” Everyone in the community was involved in running our neighbourhood. Together, we created community guidelines about everything from plowing the driveway to pets, from carshare to contingency funds, from noise to naked swimming in the pond. Would we put up solar panels? What speed limit would we put on the driveway? How would we deal with mold in a few of the basements? Would we change the footpath from gravel to paving so when a young neighbour with Duchenne’s muscular dystrophy becomes wheelchair-bound, he would still be able to get around?

These choices were ours, not made by some anonymous board, but by us. We had a system of decision-making and self-governance that allowed us to bring up important issues and to discuss them sanely, calmly and rationally. It was a system that allowed everyone’s voice to be heard and good decisions to be made. It worked. Making the right decisions is important because decisions affect people, and, as we all know, communities are people.

So, what is this “summer camp” nirvana community? It’s cohousing. I lived with my partner and our two youngest kids in a cohousing community in Ithaca. It was a wonderful experience and influenced my view on how I always want to live. Sometimes describing something is best done by saying what it is not.

Cohousing is not a co-operative, although it shares some great aspects of co-ops.

And cohousing is certainly not a commune, man!

Okay, then what is it?

Cohousing is a better way of living than a lot of traditional models. For a long time, we have been told that what will make us happy is being apart – having our own apartment, a townhouse, a single-family dwelling, or some other place to be separate from others. Fine. As an introvert, I understand the importance of alone time and having the space for that. But even those of us who are introverts are human, and humans are gregarious pack animals. Given the opportunity, most people enjoy community. Try throwing a street party on your block sometime (after COVID and with permission from the city, of course) and see how many people turn up. And how they talk about it later and how they ask when the next one is happening.

Cohousing is a place where everyone owns their own home, a private space with full amenities generally built with a small footprint, really well-designed, usually with as much green technology as is affordable and feasible. And cohousing always has a ton of shared amenities. That’s what allows the small footprint to work. The common house has guest rooms so you don’t need a rarely-used guest room in each home. A cohousing home works fine for small gatherings but you don’t need to have a usually-empty living room that could accommodate 30 or 40 people. You can just use the common house. Or use the common house to have a reception for your wedding or to host a house concert.

We had been living happily in cohousing in New York but, unhappy with the American political landscape, we chose to move back home to Ontario. There wasn’t an existing cohousing community where we wanted to live, so we decided to create one. We spread the word online, by word of mouth and on social media. We talked on CBC and got 100-plus people to come to a big meeting room in the public library, and we talked about cohousing. Over the next couple of years, we figured out “who we were,” who we weren’t, and who was looking for the same things we were.

We adopted a system of self-governance and decision-making called sociocracy. We created “circles” (committees or teams) to learn about and manage such things as finance/legal matters, community connections, land acquisition and other things. Some people left, others joined as we planned an urban neighbourhood of 24 homes and a common house in the Kitchener-Waterloo area of southwestern Ontario. We are called the Waterloo Region Cohousing Project. We’re working on a shorter name but, for now, that’s what we’re called.

We are now incorporated. We have a bank account, a lawyer and a real estate agent and cohousing advisors and consultants from the US and Canada, including an engineer, architects, and an urban planner. Several of these professionals have designed and built cohousing communities in Canada and the US. We now have seven committed households with two or three more going through the membership orientation process, and we are getting to the point of buying just the right piece of land. Once that happens, we will probably be about 18 months to two years from moving into the place our community will have dreamed and designed together with each other, assisted by professional designers, architects, city planners and the like. We expect the buildings will be killer: energy efficient, space efficient, sustainable, visitable, and livable. The shared amenities will be plentiful. But the greatest part of it all will be the people who live there, because communities are people.

If this sounds interesting to you, please check out the Canadian Cohousing Network website at: cohousing.ca. Our website is wrcp.ca or you can feel free to contact us by email, at: waterlooregioncohousing@gmail.com

And now, as I think about cohousing and music, I’m starting work on a tour. It may start out being virtual but eventually it will be a real get-in-the-car-and-drive tour, and it will be called called: CroCoCoHoCoHoHoCo (Cross-country Cohousing Common House house concert) Tour. I’m working on a shorter name but, for now, that’s what it’s called. I’ll look forward to seeing you there.

Al Parrish is a musician, writer, and radio broadcaster and communitarian. He and his partner Wendy live in Kitchener, ON with the youngest of their 4 children and their dog Fenway.