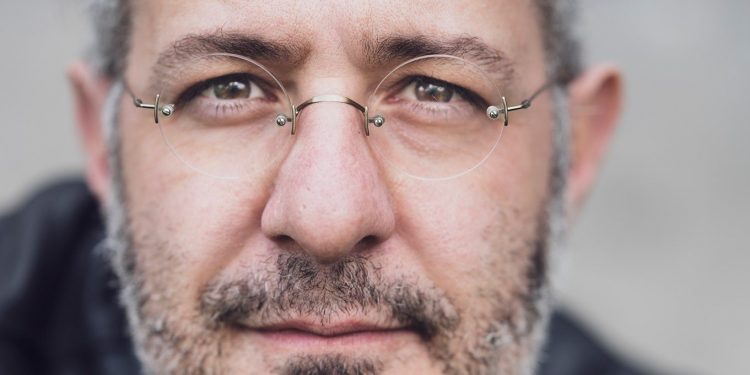 It is said that English is a very technical language, and that in contrast, French is much more poetic. You hear this nature of the language very clearly on this new recording in the perfect and atmospheric singing of Nicolas Boulerice, very ably accompanied on double bass by Frédéric Samson.

Nicolas is best known as the vocalist/keyboardist and player of the vielle-a-roue (hurdy-gurdy) with the world renowned Québecois trad band Le Vent Du Nord. They have been playing festivals and concert halls around the world for two decades and have produced nine CDs, plus a tenth with their fellow players of traditional music from De Temps Antan. Nicolas finds himself not the least limited by the traditions of the band format. He has frequently recorded music through other projects, in duo or solo formats.

Frédéric Samson was the first bass player in Le Vent Du Nord 20 years ago. He and Nicolas have shared more than half a lifetime of musical collaboration.  Frédéric’s jazz bass is the perfect complement here to Nicolas’ voice.

Maison de Pierres (House of Stone) is second in a planned trilogy of solo recordings by Nicolas that tell the tales of his part of the world in poetic story songs. The first, Maison de Bois (House of Wood), came out in 2015. The planned third recording, Maison de Paille (House of Straw), will complete the trilogy.

This new recording, Maison de Pierres, continues the vein with more songs of love, loss and tradition, based around the ideas behind travel in all its complexity. None of us can travel during this pandemic, so why not travel virtually by immersing ourselves in these laments and finding a spiritual home among the people who lived similar lives of quiet desperation in challenging times.

St-Antoine-sur-Richelieu, Nicolas’ hometown, features in the story of Maison de Pierres. Ambient recordings were made around the village to complete the soundscape into which the songs are set. We hear horses on gravel paths, the sounds of barrels and farm machinery, the honks of migrating Canada Geese, the soothing sound of the river rushing by, church bells and the calls of red-winged blackbirds. These are thirteen traditional laments set directly into the landscape which inspired their composition so many years ago.

Nicolas lives his life through story, song and words. In this recording, he has selected poetic and tragic love songs, songs where there is passion that transcends marriage vows, a song where a pact is made with the devil himself, and a song of poisoned wine intended for a husband but drunk by the unfaithful wife. We hear of horses and the Banns read in church for an impending wedding. We also hear of flowers, white roses and periwinkle while cheating tradespeople hop into Satan’s carriage.

Threads of the historic Catholic religious domination of Québec society also make an appearance. A woman in a confessional finds herself confessing to her lover who is in disguise. Thank goodness she keeps back one incriminating secret!  There is also a tale of a young woman escaping the strictures of family and society.  A soldier, the king, returns from war grievously injured. The family hides his death from his wife, a new mother, and she doesn’t know why they make her wear black to church.

Recorded in the sonically gorgeous church of Saint-Antoine-sur-Richelieu, this recording is spare. There is room for Nicolas’ magnificent voice to occupy the huge space. You might say that this whole project is a love letter to the past generations of Québecois farmers, wives, mothers, dairymaids, lumberjacks, soldiers and sailors, all of whom struggled for their entire lives to build a successful French speaking society in the land we now call Canada. Their voyages were long and hard, and they found happiness where they could. For many of us, our own struggle to live through a pandemic is not dissimilar.

To listen to the music and purchase Maison de Bois and Maison de Pierre, please visit:

Songs for the Revolution – International Women’s ...