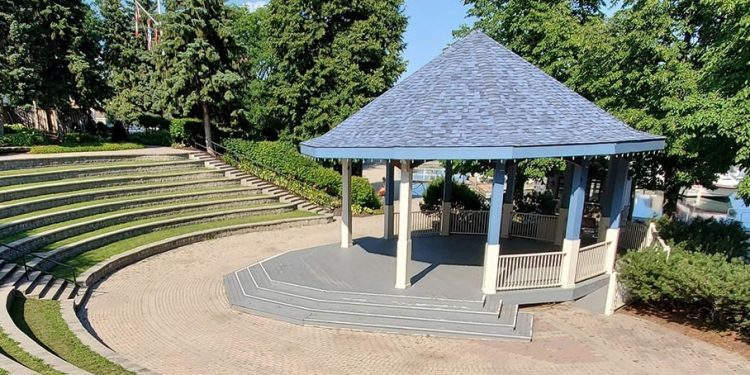 It was the kind of story that folk singers write songs about.

With Eastern Ontario mired in a global pandemic that had silenced amplifiers and turned off stage lights throughout the region, a group of bold and brazen music lovers decided that 2020 would be a good time to create a music festival.

From the stage of the Prescott Amphitheatre, with the majesty of the St. Lawrence River in the background, the Upper Canada Folk Festival was launched on Oct. 3, 2020. Bound by COVID-19 restrictions and adhering to stringent social-distancing and heath-board regulations, the inaugural event was limited to 100 tickets, and it went off without any major hiccups.

George Tierney attributes the success of the initial event to the fact that the leadership team were not only musicians themselves, but also leaders in the industry.

“We had very few problems at all. And the reason, is because we picked people who definitely were all musicians. But more importantly, we are all event organizers,” said George, a driving force behind the festival and a highly active supporter of local music. “Arthur McGregor, who’s our artistic director, ran the Ottawa Folklore Centre in Ottawa for 20 years. So he was a key organizer in every folk music festival in Ottawa for those 20 years, and he’s now just taken on the role of vice president of the National Musicians Union 1000. Mary Moore, from Spencerville, organized lots of local events. Bruce Barr does the same thing up in Quebec, where he lives. Graham Lindsey sits on the board of the Canadian Folk Music Awards with me… and Herb Cloutier, from Kemptville, runs the sound business Jamming Around Man Productions. Yeah, we picked this group carefully.”

As great a story as the 2020 festival was, it also becomes a hard act to follow.

With the effects of COVID-19 still gagging the voice of much of the local music industry, it is a challenge that Tierney and his fellow organizers are ready to take on.

“We’re planning the 2021 festival for two scenarios,” George explained. “One: that we’ll be in the same situation at the amphitheater. So, we are going to assume that we are going to be able to have 100 people and build it that way. Scenario two: let’s say the pandemic was entirely lifted. We all really enjoyed the event last year. We really feel strongly that we want to maintain that sense of intimacy around the event. So, if we could do the event by limiting it to 200 seats at the amphitheatre and do it right…”

Not that growth is not a vital part of the team’s plan.  As pandemic regulations show promise of relief, plans are already in the works to have the 2021 festival spill over into some of the local venues, offering area musicians the opportunity to extend the sounds of the festival in the bars and halls that historically provide live entertainment. Slow growth is the long-term goal of the festival team; but for now, the focus will be on keeping the event as close to its musical roots as possible.

That drive, for making the festival about the music first, is not lost on the performers.

Award-winning fiddler and vocalist Anna Ludlow, one of the 2020 Upper Canada Folkfest headliners, echoes the value of the grass-roots quality of the Prescott event.

“I thought it was very well-organized, considering it was COVID-19, and they had a lot of restrictions on,” Anna said. “It still was a very big crowd, and the people were really into it. I thought they did an excellent job, you know, keeping everybody safe and all those protocols on stage. I was very impressed with the professionalism of the organization.”

The festival was a bright spot in a dark time for live music, she said.

“It was so awesome. I just want to give them a lot of credit. Because when they approached me, everything was shut down, everything was cancelled. Everything. There was no traveling. There was no nothing. I did so many online shows and the like, but when you actually got to do the live performance, you really have that connection with the audience and the people who have the same connection with you. And it was so amazing to get out and do that. And it was such a beautiful setting. It meant the world to me to be able to perform. That they did that through the pandemic shows how much they care about the artists… just as much as they care about the people listening to the music.”

The date for the second annual Upper Canada Folkfest is Sept. 25, 2021.