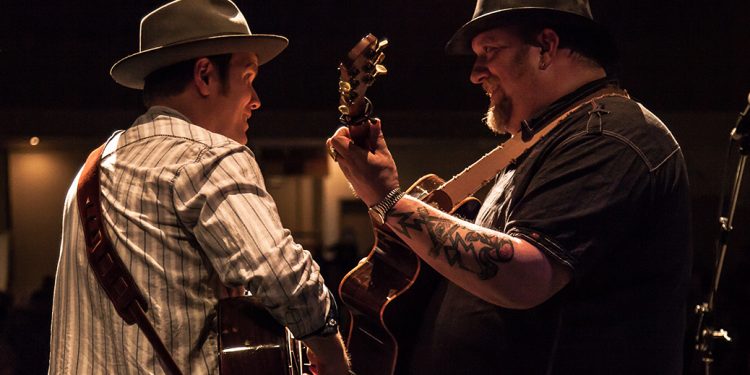 Well the day after that show, the Rogue is presenting Gunning and Cormier, as in Dave Gunning and J.P. Cormier, an east coast songwriter extraordinaire – and a helluva funny guy – and an unbelievable multi-instrumentalist who also happens to be a damn fine singer-songwriter himself.

The two go back 23 years to a particular moment when Dave had a fiddle player drop out of a show at the last minute.

“He hired me for a gig when I was just back from Nashville,” J.P. said. “Nobody knew me here.”

“We were totally blown away by J.P.’s playing,” Dave recalled. “I remember him saying, ‘If you ever do a CD, I want to play on it.’”

That happened, and much more. They played together and wrote together whenever they could, coming up with songs that graced both their projects over the years and saw them showered with awards and nominations on the East Coast and nationally.

“Dave is such a part of my life,” said J.P. “Dave is like my family, he’s like a blood relative to me, and he’s always been that way. ”

“Absolutely, we just became fast friends, and we’ve been working together ever since,” he said.

They are two songwriters, interpreters, guitar players, and singers at their peak.  They are two friends, brothers, and uncompromising performers.

Now, in a special streaming concert just for Rogue Folk Club devotees, we bring you these Maritime icons – just the two of them on stage, swapping songs and telling stories in the way that only they can do.

Dave Gunning is best defined as a master craftsman. Over the course of 23 years and 11 earlier albums, the Nova Scotian folk singer-songwriter has diligently sharpened his skills, developing into a poetic storyteller and emotionally convincing singer with few equals.

The fruits of those labours are now vividly on display in his latest collection of songs, Up Against The Sky. The relaxed and intimate feel of the record reflects its method of creation.

“I focused a lot on tones and the vibe, rather than strategic parts on this one. Many of these tunes were sung and played at the same time, and that prevented me from being able to go back and edit, forcing a little more honesty.”

Along with richly-deserved peer respect, Dave Gunning has earned a shelf full of music industry honours. That tally currently stands at eight East Coast Music Awards and two Canadian Folk Music Awards, plus a 2012 Juno Award nomination in the Roots & Traditional Solo Album of the Year category for his album … a tribute to John Allan Cameron, a compelling homage to another of Dave’s Maritime musical heroes.

His songwriting skill has been internationally recognized, with tunes scoring victories and high placings in major international songwriting competitions. As a fervent hockey fan, Dave was also thrilled to win the CBC’s hotly-contested Hockey Night In Canada Song Quest in 2014 with “A Game Goin’ On,” a co-write with David Francey. Dave has remained in demand as a producer working with many artists.

Nobody really knows who J.P. Cormier is for sure. That’s to be expected, believe me. In 1974, he was a five-year-old boy discovering an innate talent for playing the guitar. He learned faster than he could be taught.

By the mid-80s, not out of his teens, he was a sideman for bands and artists of many different genres in Alabama, Tennessee, Mississippi, and all across the deep south. As he travelled and worked he added more and more instruments to his arsenal of capabilities. He became indispensable to the bands he worked for. In the early 90s, he became a sideman for one of Canada’s favourite sons, Stompin’ Tom Connors, and also became a staple of the recordings at Studio H in Halifax. His work with the CBC there spanned musical, production and arranging duties. All this before he was 20.

He was in Nashville playing mandolin and banjo in a Grammy-nominated bluegrass gospel band and performing on the Opry, and playing television shows with the likes of Waylon Jennings. All those people also thought he was one of them, reared in the ways of bluegrass, old time and Americana music. They knew he was from Canada, but it just didn’t seem possible.

Then in 1997, something amazing happened. An album released in Canada, out of nowhere, called Another Morning. This time it was J.P. as a songwriter and a lead singer. And what a songwriter he turned out to be. Some of the performances on that album are literally part of the musical vocabulary today on the East Coast. The Canadian industry thought so too, and it received a Juno nomination and won an ECMA. And that was just the beginning. Thirty-six years after stepping on stage as a professional union musician for the first time at the tender age of 13, J.P. is still going, and frighteningly, still getting better.

Sixteen albums followed, as did 12 more ECMAs, another Juno nomination, a Canadian Folk Music Award and five Music Nova Scotia Awards. Each album was a snapshot of another thing that J.P. can do. There are fiddle, mandolin, banjo and guitar albums, tribute records, songwriting collections, a purely astounding spectrum of talent and musical vision.

His catalogue of recordings and the 150 or so records he’s produced for other artists resemble the tapestry he weaves in live performance.  People still leave his shows confused, amazed and wondering what they just saw. Did they see a storyteller? A songwriter? Arguably one of the best guitar players in the business today? Someone who crosses the lines between different instruments like there are no lines? Who was that masked man, anyway?

Of all the things he is, foremost he is an entertainer. One of the best.  After you’ve seen what he does, we’re certain you will think so too.