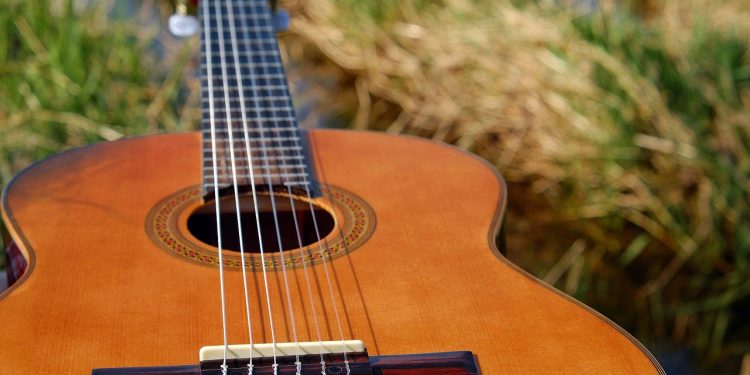 I want to acknowledge that I am writing this article from unceded Algonquin Territory.

Songs for the Revolution is a monthly column digging into folk culture, the music and what lies beneath.

This one is about the International Folk Alliance conference, which took place online this year and can still be accessed on a pay-what-you-choose basis at  https://folk.org/showcasedonation.

It was absolutely wonderful being back in the FAI spirit this week.  There is just something about this conference for me that transcends any other event that I attend.  It’s the people, the thoughtful panels, the keynotes, the mentoring, the speed meetings, the exhibitors and events and, of course, the incredible music we experience.

The 2021 socially distanced Folk Alliance International conference began with acknowledgements of the historical Indigenous lands that FAI board members and staff were streaming from, setting the tone for the conference. Participants were asked to acknowledge where they were listening from and a map was provided if people were unsure (see native-land.ca) 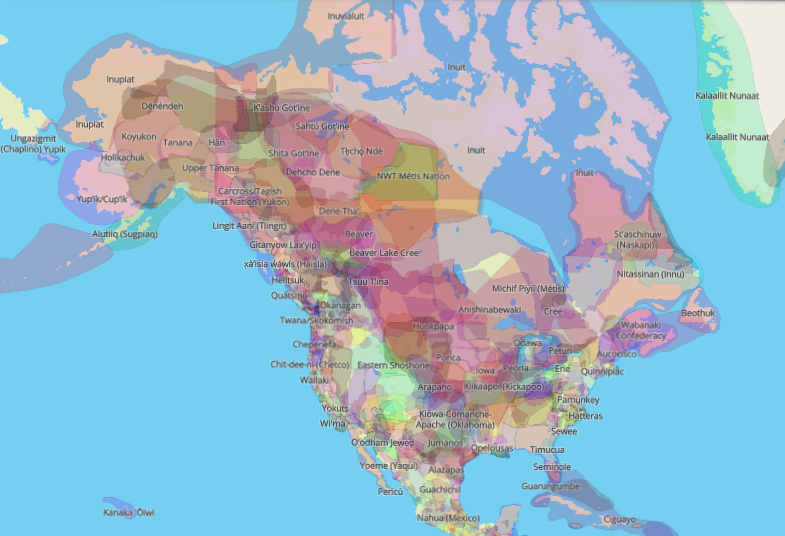 FAI board member Gerald Torres in his opening remarks said, “We recognize the legacy of colonization that is embedded in the technologies we use, the structures that guide the conference and the ways in which we think of things in every day life.”

The first panel I attended was Anti-Racism: Setting a New Tone in Folk Culture. This was hosted by music scholar, historian and Grammy winner Dom Flemons and director of The Rhapsody Project Joseph Seamons.

This panel was a b 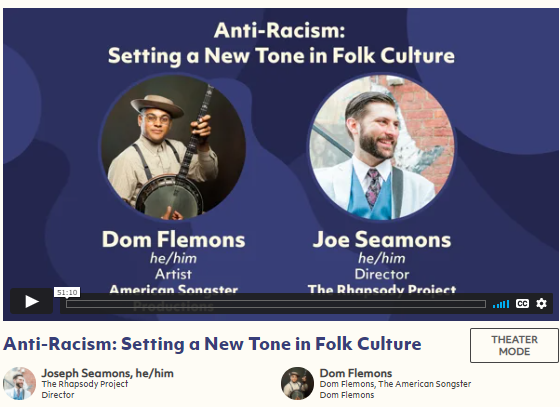 eautiful journey of acknowledgements, of discovering true folk history and progressing to a more inclusive place.

“The people that started out defining folk music were largely white men, and they applied that lens, putting boundaries on what was folk music. Those boundaries need to keep opening up,” Joseph said.

How do these points apply to Canadian folk history? What are we doing to appropriately document and further understand Canadian folklore?

On Monday, Feb. 22 at 1 p.m., Folk Alliance presented its keynote Interview with Margaret Atwood. For an artist, this was a treat. The acclaimed singer-songwriter Anais Mitchell took us on a trip down the yellow brick road, with lions and flying monkeys. Ms. Atwood spoke in folk context of everything from her history, process and research to that drawer where we keep unfinished works for inspiration.

Next was Songs and the Pursuit of Social Justice. Deanna McCloud, founding executive director of the Woody Guthrie Centre, reminded participants “to acknowledge our shared responsibility, to use this time together well, and for each of us to consider our roles in reconciliation, decolonization and active allyship.” This was a beautiful discussion about the interplay between music and activism.  Ash-Lee Woodard Henderson kicked off the discussion by speaking of the Highlander Research and Education Center.  This is a grassroots center focused on equipping marginalized folks with the tools needed to put them at the spears tip of collective action for positive change.

Author Kim Ruehl then spoke of Zilphia Horton, who arrived at the Highlander Center in Tennessee in February, 1935. Zilphia Horton, through singing, culture and arts, somehow found a way to bridge even Black labour leaders and Klansmen representing their unions.

The Souls of Conscience, Sounds of Freedom exhibit, that will be hosted at the Woodie Guthrie Centre was introduced by Bob Santelli. Bob suggested that music was the fuel of social movements in the U.S. from the pre-revolutionary broadsides, anti-British lyrics sung to beer drinking tunes, to gospel songs providing courage to those who marched in the Civil Rights movement.  There have been periods of time where these songs would rise.

I would suggest that other panelists, given the opportunity, may have suggested that there are other moments in US History where protest music has arisen, but they are not mentioned simply because they have not been yet documented.

Is that the case on this land?  I ask our radical folk caretakers in northern Turtle Island, what is our undocumented folk history? I do hope we’ll have some comments from our folk elders who can help point us in the direction of uncovering the folkloric history of this land.

Musical artist Adia Victoria put everything back into context by reminding us all that it is the elders of the past whose shadows we stand in, that they are the true leaders we need to honour. 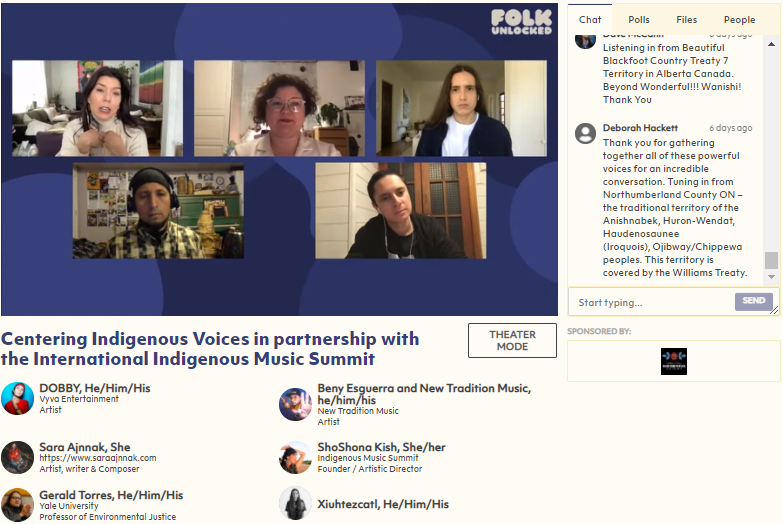 ShoShona Kish, activist, writer, musician, artistic director of the International Indigenous Music Summit and Juno award winner with the band Digging Roots, hosted an inspiring panel discussion called Centering Indigenous Voices.  A subtle reference to “his stories have been told,” referring to “history,” caught my ear, something I’d never picked up on.  ShoShona quoted her mom saying, “We are all a spark from the fire of the All Spirit.” Well each of the panelists revealed the fiery beauty of the spark in the discussion as it unfolded.

Sarah Ajnnak, an artist from Sweden whose family are reindeer herders, began the conversation.  Sarah spoke of going out that morning and feeding the reindeer. She felt that closeness to nature, that connection and respect for nature she grew up with, gave her a perspective, she could share on climate change that not all people experience.  She also confessed to a dark side of the history of Sweden, a shameful face of Sweden, which was, Sarah said, that they were “the first land of the world to have a racial biology institute.”, “By doing scientific research, they wanted to show that the (Indigenous) Sami people were a lower race.” she said.

Each artist shared truth, a truth ignored by the mainstream press.  Dobby released a song in Australia last year called “I Can’t Breathe,” calling out the mainstream media, who seemed unaware that, as Dobby informed us, “since 1991, we have had 441 Indigenous deaths in police custody.”  Dobby also named David Dungay Jr., who died in police custody in a similar way to George Floyd.  In Canada, the situation is the same. We could name Chantel Moore and Rodney Levi, who died at the hands of police with no one held to account. The commissioner of the RCMP, Brenda Lucki, suggested this past year that there is no systemic racism in the RCMP.

When we talk of songs and the pursuit of social justice, these conversations at a folk conference can be the seeds that can inspire art, can spark songs that can open the hearts of those who might not have been willing to listen.

There was a great contingent of Canadian artists at Folk Alliance this year, as always – perhaps it was due to it being online – but I need to acknowledge the extreme east coast presence from Quote the Raven, Jeff Pittman, Krista Martel, Terra Spencer and Norma Macdonald, and I know there were many others. If you were there, please leave a comment. Norma, Terra and Krista, I had not heard before, but all are lovely east coast voices with each their own story and interesting songs to relate.

I had the opportunity to catch a solo Suzie Vinnick livestream this week too, which was fantastic.  Her voice is sounding better than ever, she played some beautiful uplifting songs and even pulled out the Green Monster and treated us to a tune on bass. 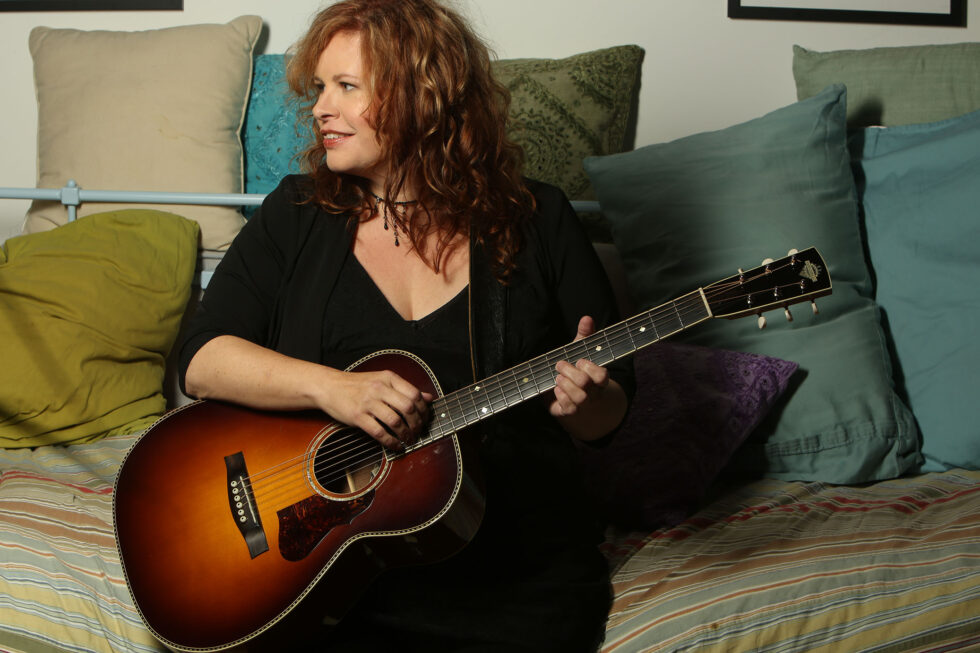 Jon Brooks performed, and not on guitar, which was very cool to experience as part of the Fallen Tree Records showcase. Peter Chapman sent the links to the performances out on the MaplePost listServ. The performers included Ottawa’s Silent Winters and 100 Mile House.  There were some artists familiar to our community that did experience some tech issues unfortunately.

There were some well-produced presentations from the regional Folk Alliances and some of the international spotlight showcases.  There was a mix of pre-recorded and live performances this week. I particularly enjoyed shows where there was a blend of the two.  As mentioned, all of the music and panels are currently still available.  This is a unique opportunity to experience the current international folk community.

Folk Alliance hosted the performances through YouTube, which allowed any artist to schedule their stream in advance and then use the platform of their choice – OBS, Streamyards, Zoom, to name a few – to stream from.

Side note: for any artists struggling with livestreaming or with anything else for that matter, reach out to other artists for help. We’re all going through these same new challenges.  If you ask a question in the chat below, the answer by me or someone else can benefit everyone.

FAI did have some Zoom-based events too, including a songwriter’s workshop where people broke out in to Zoom rooms.  They also had a live elevator pitch session for artists targeted at the DJs attending Folk Alliance. 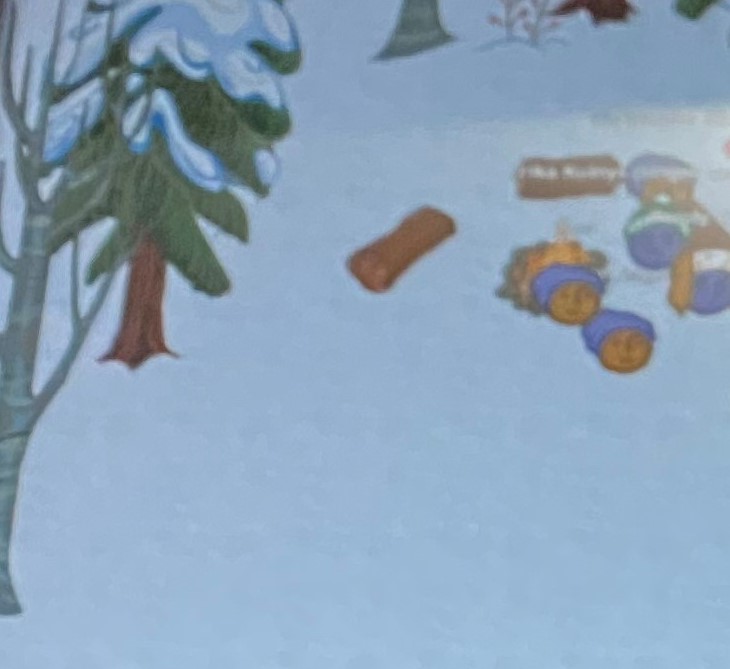 And then there were the Midnight Brambles, a new application, a virtual world embedded in the conference website to provide the opportunity to socialize. You clicked a link and entered into the Bramble as a little toque with your name on it.  You moved around a virtual winter space with a fire pit and a lodge.

As you approached others, you could hear the conversation and begin to see their faces, thanks to the interface with people’s cameras and microphones.  Next thing you knew, you could see each other and had joined the space with them.

We had some song circles in the Bramble, and I spent a few late nights this week making friends with strangers there.

Folk Alliance wrapped things up with the International Folk Music Awards. In accepting his Lifetime Achievement Award Gordon Lightfoot recounted the story of “singing myself to sleep at night when my mother would put me to bed at age three or four.”

Despite the whole conference shifting online this year, the FAI team made the best of it. A big hand goes to the board of directors and to the director of operations, Jennifer Roe, who somehow was just able to make the time tick.

The conference ended with the Global Music Party, hosted by Global Music Match, which pairs artists in collaboration.  The show kicked off with a group that included Canada’s Dave Gunning and his song “These Hands.”

And while that concluded the live programming, many of us attending plan to return to experience more of the 800 plus performances and dozens of panels we missed. I do have many more music and panel suggestions.  Leave a comment at the bottom, if you’d like me to reply with a few more recommendations.

Until next year, where we hopefully will gather face to face, instead of screen to screen, let me acknowledge how fortunate I feel for the wondrous folk alliances that I’ve made and continue to make year after year.