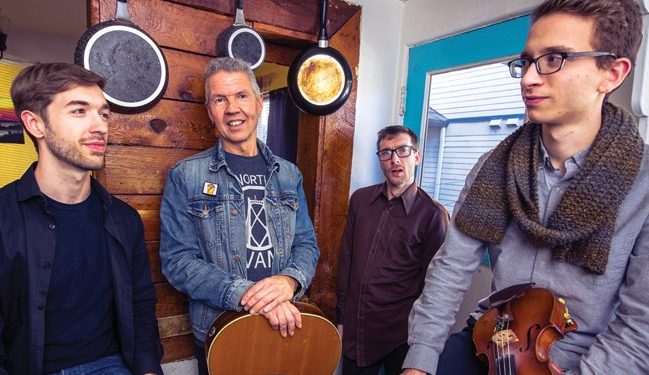 **Note:  the date of this concert has been changed to March 12**

Vancouver’s Rogue Folk Club is bringing us at least two fabulous online performances this month, starting with this one:  The Early Spirit Trio, March 12 at 7 p.m. PT (That’s 10 p.m. ET).  Ticket are just $10 at roguefolk.bc.ca/concerts/ev21030619.

The Early Spirit Trio is every bit as intriguing as the diverse musical backgrounds of its members and as exciting as a live band can be.

The west coast rockin’ folkin’ rollin’ jazzin’ Celtic swing-grass ensemble – that’s their description – is fronted by ex Spirit of the West band-member Jay Knutson and features Ben Kelly, the son of SOTW’s Geoffrey Kelly, on percussion.  The third member of the trio is Berklee grad Gabriel Dubreuil on violin.

After leaving Spirit of the West, Jay worked with major Canadian folk artists including Hart-Rouge and Connie Kaldor. His solo material, a constant throughout his career, draws from jazz and roots music.

Gabriel was already working around North America as an in-demand session violinist before joining the trio in Vancouver. He also had his own teaching practice.

After the release of their debut album, Unrelated, the band was sought after from coast to coast, and they covered a good chunk of it, chasing down the Spirit trail and getting folks from Victoria to Inuvik and Winnipeg to Moncton up out of their chairs and dancing.

That was just a short couple of years ago, but they have a new album in the works and will be performing material from it at this concert.

They invite fans of all ages to remember how much they love music and get dancing!

Isabel and the Uncommons play music, do ...