How Leahy’s music career has evolved with their family 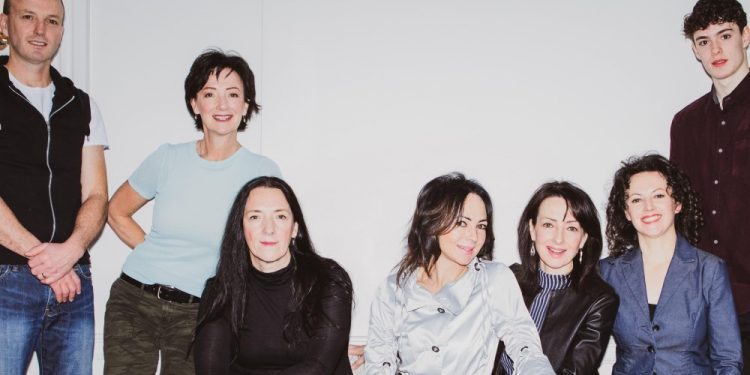 The family band Leahy has started to reacquaint itself with music lovers in the last few months. First came their Christmas single, “O Come All Ye Faithful” followed by the singles “Good Water,” “Little Moon” and now “Tears,” which can be found on their new album, Good Water, set for release this Friday. For the members of the Lakefield, ON band, the choice of David Bottrill as producer was essential to reflect their current focus on songs more than instrumentals.

“This album contains primarily original vocals, so we knew we wanted to work with somebody who had experience in that realm,” said Erin Leahy from her home in Montreal. “David is originally from Toronto. He spent the last 20 years in England working as a producer, but he returned to Toronto. Our songwriting starts with folk and then branches out into country, pop music [and other] influences along the way. So we wanted somebody who could understand, and David has worked with a wide range of artists. Also the fact he was in Toronto, which was sort of our center, it seemed like a natural fit as well.”

Over the years, David Bottrill has worked with the likes of Peter Gabriel, Smashing Pumpkins, Metric, King Crimson and Rush, earning himself three Grammy awards along the way.

The evolution of Leahy as a group can be traced back to when their parents, Frank Sr. and Julie, taught the kids fiddle and step dancing. At first, the parents performed with just the oldest children at local events, but pretty soon, more kids joined in performances at fairs, exhibitions and corporate functions throughout Ontario as The Leahy Family. It’s a tradition that seems to continue today with Donnell Leahy and Natalie MacMaster including their kids in shows, while brother Doug guides his children as The Next Generation Leahy. The arrival of all these offspring is one of the main reasons there have been quite a few years between Leahy’s last album, 2007’s Handmade and Good Water.

“Our career has followed a path of what I would call is naturally happening within our family,” Erin said. “It’s funny. We were all single at one point, and then people started to get married, and then suddenly there is a child, and so we were travelling around with this one baby. We just adapted to whatever was going on in our lives. That baby was Jacqueline Enright, Agnes’ daughter. Then Agnes continued to have children and we continued to adapt. Agnes would stay home, and yet she’d be on the photos of our albums. People would ask, ‘Who is she?’ and we’d reply, ‘Well she’s on maternity leave.’ But of course her maternity leave lasted for a very long time. So it’s like that. It depends on what’s happening within the family in terms of our personal lives. These gaps between albums tend to reflect shifts like that in our lives.”

Leahy got their big commercial break in 1997 with the release of their self-titled album and the single, “The Call to Dance.” What followed was a double win at the 1998 Juno Awards for Best New Group and Best Instrumental Artist, with a third Juno the following year for Best Country Group or Duo. While Leahy may have grabbed everybody’s attention with their instrumentals, songs have always been part of their repertoire.

“Instrumentals are at the root of what we do”, said Erin, “because our parents were centered in instrumentals. Our mother sang. We had a vocal chapter from the beginning. It’s always been a mix, but at times we focus on one or the other, depending on where we are musically.”

Erin gave an example of how Leahy creates a song by describing how “Good Water” was put together.

“When you’re on tour, in one city or the next, you’re writing in a dressing room or out on the lawn somewhere or a hotel room. There’s a bit of scatteredness that goes on with the writing of music. ‘Good Water’ took place over the course of a number of years. First of all, it was melody-driven, then the lyrics of the chorus came next—stream of consciousness type of writing. What followed would be the verses that were serving the lyrical idea of the chorus.”

The foundation of the sound of Leahy is rooted in the fiddle and piano and branches out from there. The inclusion of a diatonic accordion on “Star of The Sea” might surprise some listeners but again, it’s just a reflection of what’s going on with band members; in this case, Frank’s son Xavier.

“Xavier is 17 now, and from a very young age he’s been performing with us, as have my other nieces and nephews. But Xavier has been giving solo performances in our group during our tours for quite a long time,” said Erin. “Fiddle was his first instrument but then he learned the accordion from a teacher at one of our music camps. He just blossomed very quickly at an early age, to the point he’s now an active member in our group. So accordion is presented because that’s what we’re playing. However, I have to say, years ago my sister Julie was the first to play accordion on our LPs!”

The Leahy Music Camp has been running every summer since 2008 and was established purely out of fan demand.

“People at our concerts would ask, ‘Do you ever teach?’ And we would say ’no,’ because we were always on tour. Then we just thought we should try to make it available. My sister Maria was the spearhead of that idea and took it upon herself to lead the way with the camp in Lakefield, our hometown. Prior to playing in Leahy, Maria was a high school teacher, so it fits into that part of her vocational life as well. She still directs it today. So we decided to try this and see how it goes, and it went over very well. We let people know on our tours across Canada and the U.S. Our first year we reached capacity, which is about 200 people. From there it just continued, and it’s been great ever since. Twenty-twenty was our first virtual music camp. Prior to that, we hosted it at Lakefield College School. We teach all of the instruments we play plus we ask other instructors to come in as well from Canada and around the world to teach.”

It would seem promoting the camp while on tour across the continent certainly helps to build up a mailing list when everyone loves what you’re doing!

“It was a perfect place,” said Erin, “because people do want to travel. They do want to go somewhere. Parents do want to take their children to learn in summer camps, so this just seemed to be a natural fit for our audiences.”

With the release of Good Water it would seem the interest in Leahy’s music and their music camp will soon be on the increase.

To learn more about Leahy, go to leahymusic.ca.

Updated: here are this year’s Maple ...