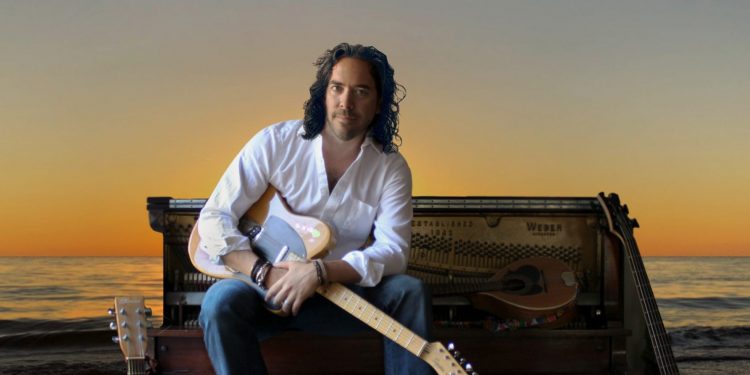 Bryce Thomas likes to describe his sound as “mariner folk-rock.” It’s partly because many of his songs reference bodies of water, although on his upcoming album, Across The Neuro Seas – set for release on March 26 – the title’s play on words reveals a much deeper meaning. We’re excited to premiere the first single, “Perpetual Motion Machines,” available now on all digital platforms (listen below!)

The Toronto-based singer-songwriter wrote most of the 12 tracks for his fourth full-length album during a month-long span in the spring of 2020, just as pandemic restrictions were taking hold. He credits the creative surge not only to lockdown anxiety, but also to a five-year recording hiatus as his family expanded. Bryce made full use of his time to record the album himself on his laptop, with the tracks later mixed by Josh Bowman and mastered by João Carvalho.

Musically, Bryce didn’t hold back, performing all vocals, guitars and keyboard tracks along with a variety of other instruments, only making exceptions for drums and some bass— performed remotely by Marito Marques and Chris Monster, respectively—a horn section, and additional vocals by his wife, Lisanne. The album’s overall labour-of-love aesthetic extends to Thomas’ lyrics as well, from his meditation on the passage of time heard on “Perpetual Motion Machines” to the almost Zen-like ballad “We Shall Be Bound,” which brings things full circle with some fortuitous help from a songbird who managed to get on tape.

Bryce explained, “‘Perpetual Motion Machines’ is probably my favourite song on the album because it’s the most autobiographical. Plus, it’s in waltz time, which I always think gives songs a special energy. And I scored the trumpet part for it, which was a lot of fun. For ‘We Shall Be Bound,’ I envisioned it as a closing song along the lines of Jackson Browne’s ‘The Loadout,’ with the lyrics aiming to reflect the cultural changes the entire world has been experiencing over the past few years. Having these songs bookend the album makes it feel sort of like a short story collection to me.”

In between, on songs such as “Young Lovers” and “Summer Nights In Summertime,” Bryce exquisitely captures the immediacy of a new relationship—in a gloriously ragged folk-rock manner on the former, and in a stunningly intimate way on the latter. Conversely, he injects the power of experience into “Widow’s Walk” and “Hope And Chance,” two songs that had sat on the shelf for 25 years until finding their moment.

Indeed, when asked to describe his musical evolution, Bryce gives a straightforward answer: “Long.” Making music has been a part of his life since early childhood, and he became an active figure in the Toronto indie scene of the 1990s, first recording with his high school friend Dave McKinnon (later of Dig Circus and Fembots) and later creating and hosting a weekly songwriter’s circle at Queen Street West club Holy Joe’s that ran for two years. During that period, Bryce was a regular on Toronto stages and a passionate supporter of numerous Canadian singer-songwriters of that era. Across The Neuro Seas pays tribute to some of them with the song “Up Around The Bend,” incorporating lyrics by Hawksley Workman, Joel Plaskett, Sarah Slean and Danny Michel.

The final results on Across The Neuro Seas clearly show that he made the right choice. While there are sure to be many “what I did during my pandemic lockdown” records on the horizon, Bryce Thomas’s Across The Neuro Seas bears all the hallmarks of a true folk-pop auteur, with its timeless sound sure to remain relevant long after we’re allowed to once again get close to our loved ones.

For more information, go to brycethomas.com.

Bryce Thomas · Perpetual Motion Machines
If you are enjoying this content, please take a second to support Roots Music Canada on Patreon!

The All Canadian Soundclash has a catchy ...