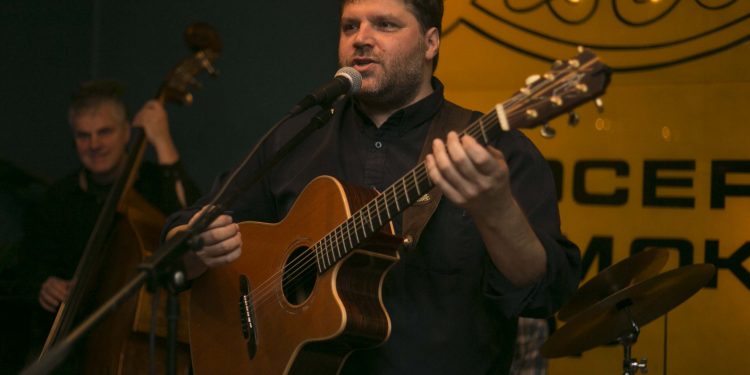 While listening to Mark Nyvlt’s music, it’s easy to picture the many places he’s visited around the world. For the Ottawa-based singer-songwriter, exploring different cultures has always provided endless inspiration, and on his latest album, This ‘n’ That – available now on Apple Music, Spotify and at marknyvlt.com – Mark thematically retraces some of his steps, along with acknowledging the various musical styles that, combined, define his distinct sound.

In broad terms, it’s a mix of folk and jazz, with some classical elements present as well that recall Mark’s teenage musical training. But overall, This ‘n’ That offers an unpredictable sonic journey wherein a standard such as “La Vie En Rose” can sit comfortably next to a complex rhythmic excursion such as “Pandora’s Box.”

Mark has always embraced a broad worldview as the son of a Czechoslovakian father and Egyptian mother. It’s led to his songwriting encompassing the essence of the stories he’s accumulated over the course of his travels, which he hopes convey some of the hope and wonder they’ve provided him.

“I like to get off the beaten path when I travel,” he said. “Although I did visit famous sites, I spent lots of time in places most tourists don’t go to. It allowed me to hear the local music and see the deeply cultural dynamics in people’s lives.

“For example, when I stayed in an orphanage in Rwanda many years ago, I heard the most melodic and rich harmonies of these orphans, as they sang daily after their evening meal. There were no instruments, only voices. I was 19 years old when I heard the power of African music, and it’s never left me. Whenever I think about this experience, I’m always reminded of the closeness and intimacy that music generates within peoples’ hearts.”

In keeping with that notion, many of Mark’s original songs on This ‘n’ That deal with some of the bigger questions all human beings are faced with from time to time. On “Dreams,” it’s the importance of having the ability to escape reality whenever it’s necessary to rejuvenate. On “Flipside”—inspired in part by Milan Kundera’s novel The Unbearable Lightness Of Being—it’s learning how to appreciate the positive surprises that can come during the course of any given day. And on “The Tree,” it’s about taking the long view and not getting bogged down in immediate ideological disputes.

For those who might think this isn’t the usual singer-songwriter fare, it shouldn’t come as a surprise that Mark is also Dean of the Faculty of Philosophy at Ottawa’s Dominican University College, a vocation he ultimately chose rather than pursuing a career as a classical musician. However, since picking up the guitar again in his 30s, Mark has released three albums (This ‘n’ That is the fourth) that have demonstrated his renewed, open-minded approach to music.

“I learned that my classical training has helped me explore all aspects and corners of the guitar neck, which in turn has led me to create unique rhythms to accompany my lyrics,” he said. “Now, I have found myself still in the ‘Indie singer-songwriter’ genre, but with a great interest to introduce jazz elements into my music. My band is also very versatile, and I think This ‘n’ That really captures a folk-jazz hybrid that I’ve been going for.”

Indeed, even though Mark still admires the work of Bach, Mozart, Brahms and other masters, his sound now contains more echoes of Dylan, Lightfoot and Cohen, along the with the guitar stylings of Jerry Garcia and Dave Matthews. In fact, Mark tips his hat to the former with This ‘n’ That’s version of Irving Berlin’s “Russian Lullaby,” a longtime Garcia favourite, as fans of his solo work can attest to. Take a listen to it below.

As he did on his world travels, Mark Nyvlt doesn’t follow a map on This ‘n’ That. And by doing so, the end result adds up to a musical experience that appeals equally to the heart and mind.

Mark J. NYVLT · MARK J. NYVLT – THIS N THAT – 02 – RUSSIAN LULLABY – IRVIN BERLIN
If you are enjoying this content, please take a second to support Roots Music Canada on Patreon!