5 sea shanties by Canadian performers for all you #seashantytiktok fans 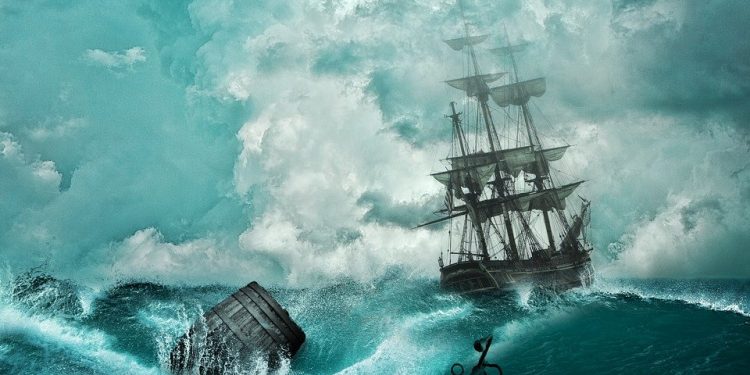 Greetings!  If you’ve just joined us from Google after doing a search on the words “sea shanty,” I’d like to welcome you to Roots Music Canada.  We’re you’re home on the web for all things Canadian folk, roots, and world music – which is to say, stick with us if you want to find out what the next big thing is going to be. Cuz seriously, we were onto this sea shanty thing way before Colbert.

Sea shanties, for the uninitiated, are work songs that were sung by sailors because the rhythm helped them carry out repetitive tasks such as turning a capstan. However, many contemporary artists have composed songs in the a cappella, call-and-response, maritime shanty tradition. We’ve included samples of both traditional and contemporary shanties here.  All are performed by Canadian artists, and I guarantee, some of these have yet to be discovered by TikTok.  You heard them hear first.

1. “Bully in the Alley” by the Friends of Fiddler’s Green

The Friends of Fiddler’s Green formed back in 1971, which is approximately the last time that traditional folk music was this cool, and they have remained active in various formations right up to this day. Sea shanties were such a well-known part of their repertoire that they inspired the now-legendary Canadian folk singer Stan Rogers to write his iconic song “Barrett’s Privateers.” You won’t find the Friends’ music on Spotify, so it’s a good thing you’re here with us on Roots Music Canada, because we’ve been at this a while, and we know how to find the really good stuff.  See this video below?  Skip ahead to 5:32 to see them perform the traditional shanty “Bully in the Alley.”

Speaking of being hip to sea shanties long before Stephen Colbert, this Toronto band has been performing them since 2013!  Also, hot tip:  they’re performing live online on Friday night as part of the Speak Music Be Kind Festival. Google it.  It’s free! Here’s their version of the classic shanty “Randy Dandy O.”

If you like sea shanties, you’ll love Tom Lewis.  He’s been called “the Springsteen of sea shanties,” and he’s written some originals that sound like the classics, albeit with a bit more humour.  Tom was a legit sailor in the British navy for 24 years, so he knows what he’s singing about. Ironically, though, his two best-known songs are actually about NOT sailing … anymore.  Google “Marching Inland” and check out this number below.

4.  “Bamfield’s John Vanden” by the Bills

This is a contemporary original about a real person, a fisher, and I don’t think the structure is a true shanty structure, though experts might beg to differ. It is nonetheless a wonderful a cappella maritime song with stunningly beautiful harmonies, so I think you’ll find it a worthy addition to your shanty collection.

You might’ve come across this one on TikTok or listened to it on Spotify. Some of you clearly have because Stan’s stream-counts have been blowing up ever since Nathan Evans’ rendition of “The Wellerman” took off.  As mentioned above, Stan – who is widely regarded as one of Canada’s greatest folk singers and who died in an airplane fire in 1983 at the age of just 33 – wrote this song out of jealousy, basically.  He watched the Friends of Fiddler’s Green singing their shanties and wanted one he could sing lead on. According to an article on folkmusic.net, authored by FOFG member Alistair Brown, it all went down at a festival in Sudbury after a night of pub singing at which Stan had little to contribute. “He arrived at breakfast the next morning and threw a sheet of paper with the words of ‘Barrett’s Privateers’ on the table in front of us, uttering the memorable words, ‘Suck that back you limey bastards!'” Alastair wrote. “We like to think we helped him find his muse.”  Well, if you haven’t already heard the song, you probably want to now, right?  Here ya’ go!

Winterfolk is happening virtually this year … ...