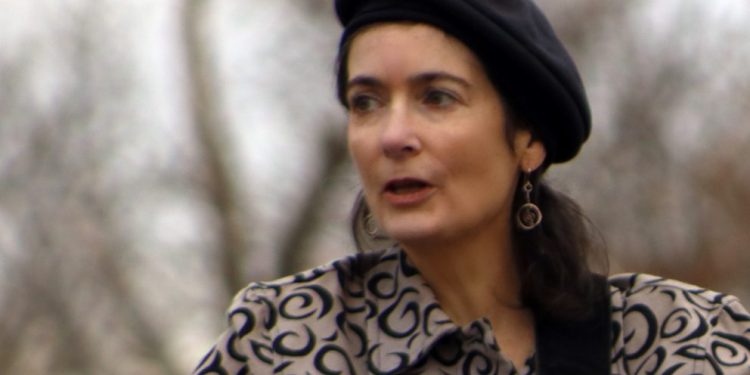 “Singing is the most dangerous thing! Which of course Peter Seeger could have told you anyway in another context,” says Maria Dunn. “But now in the literal context it’s a dangerous thing. So that has been an adjustment for me. I love connecting with an audience by inviting them to sing along, because it’s just a joy to hear those voices singing back. It gives everyone more energy—both the audience and you as a performer—so I really miss that.”

The Edmonton singer-songwriter had been talking about her latest album, Joyful Banner Blazing, when the topic of conversation turned to the reason it was delayed from its initial May 2020 release to just recently. A momentary easing of COVID-19 restrictions in late August did allow for a few porch-front performances where Maria could adjust her audience engagement practices.

“I had to start making some jokes about humming along,” she said laughing. “And there’s less pressure with humming because you don’t have to know the words!”

The new album is Maria’s seventh and was produced by her longtime friend, Shannon Johnson of the McDades. The title song and album cover graphics are both a reflection of the eventful life of one of Maria’s aunts, who was a Salesian nun in London, England.

“I had the great pleasure of working for Aunt Cecily in the early 90’s in a daycare she had, as part of various youth programs. Her energy, her joyful trouble making, really impressed me at the time,” she said. Then we lost touch over the years, but I had the chance to re-connect with her in the fall of 2015. I could see she was still so fired up with the important work she was doing, by the goodness she saw in the youth in her community, and how she wanted to draw that out and make their lives better. When she passed away six months later, I wasn’t able to travel back to London for the funeral but the story that came back to me is that as the funeral car was going from the convent to the church, people in the community lined the roadway, and they started singing. For anyone else, you might think it was an irrelevant song, ‘She’ll Be Coming’ Round The Mountain,’ but for my Aunt Cecily, it so fit her playful spirit and the joy she brought to so many people in the important work she did. So when I heard that story I thought, ‘I’ve got to try and capture that somehow.’”

Maria’s aunt was also quite a sight as she made her way around the Bermondsey area of London on a scooter!

“Jeff Sylvester, who did the album artwork, took that story of her affectionately being called ‘The Flying Nun’ and put that on the album cover in such a delightful way! She’d be going around doing errands [in the] community, she’d go into the pubs, she’d be raising money for her programs with the youth on her scooter.”

Throughout Maria’s career there have always been songs that dealt with social justice and labour issues. “Heart In Hand,” “Waltzing With the Angels” and “Secondhand Skates” from the new album are the latest examples of this longtime concern.

“That interest has always been there,” she said. “Telling stories of people who were struggling through something and taking the side of the underdog. From my very first album there’s ‘Shoes Of A Man,’ which is about my grandfather’s life and the poverty he grew up in. I wasn’t conscious that I was singing songs that would fit with the labour movement per se in that first album, but in my early years in Edmonton performing, I met my friend and mentor, Don Bouzek, who is more formally involved in labour arts and has a theatre company called Ground Zero Productions. He saw in my songs and performances that I was telling stories about workers, [so] he drew me in a little more formally. In 2001, I did an artist-in-residency with the Edmonton District Labour Council. That was an opportunity to dive in and research some stories about workers in Alberta and Western Canada – and also to meet some of the senior folks in our labour community and hear what they thought were important stories about positive collective action, and how we can change things for the better together.”

An example of how Maria is able to match the story she’s telling in an appropriate musical framework is found in “Waltzing With the Angels.” The song tells the story of the Metis ironworkers who built so many of the high-rise buildings in Edmonton, including the CN Tower, in the mid-60’s, while also detailing the dangerous aspects of their jobs. Maria’s waltz-time arrangement gives the song a lightness not usually associated with construction work.

“That song came from interviews with the men who were, in some cases, teenagers when they were building Edmonton’s CN Tower. It came out from interviews the Alberta Labour History Institute did with these men. Watching the interviews and reading the transcripts, there was lightness, there was a great pride in the work they did. They do joke about the danger in some cases, but it was a very real danger they experienced. Of course, labour laws in those days really did not support safety measures. So you have this very dangerous work, and yet the people doing it [have] their courage and youth exploited. Muriel Stanley Venne, a well-known Indigenous rights activist here in Alberta, [helped] interview these men just a few years ago. When Muriel invited me to write the song, one of the first things she said was, ‘It was so great to talk to them. You have to write a song. They talked about their work as ‘waltzing with the angels.’ So that almost immediately gives a feeling of lightness, and yet [there’s] this real danger these men experienced.”

Joyful Banner Blazing contains something unusual for a Maria Dunn album: a cover song – specifically “From Dublin With Love” by Ron Hynes.

“I first heard that song on CBC Radio. [Ron] was performing live, and it was one of those moments where you rush to your cassette player and hit ‘record,’ and I got half the song. I don’t think Ron actually recorded and released it for many years, but I rode around town in my car, which had a cassette deck. Anytime I was out running errands or whatever, I would stick in that cassette with the half song and sing along. I loved singing harmony to his beautiful melody in the refrain.”

How fortuitous it was then, when a few years later, Ron was booked for the Edmonton Folk Festival and Maria was scheduled to share a workshop stage with “The Man Of a Thousand Songs.”

“And he sang that song!” she recalled. “It was one of those moments when you think, ‘OK, I could sing this.’ I started singing and, sure enough, I got the feeling he was enjoying my harmony, so I kept singing it. After we were finished he asked if I would come back and sing harmony for his solo concert the next day. So that was just a thrill! When someone who is one of the premier songwriters in Canada, and much more established than you are, is encouraging to you in that way, it was just a thrill. I really appreciated that.”

Going forward, Maria is very optimistic about what lies ahead post-pandemic, not only for herself but for the folk community as a whole.

“The folk music world, the clubs and festivals, are built so much on our connection with each other. We don’t exactly know how things are going to change or when we’ll get back to the way we used to gather, but I feel like the connection is very strong in people’s hearts and will definitely continue.”

#seashantytiktok has prompted a surge in Stan ...