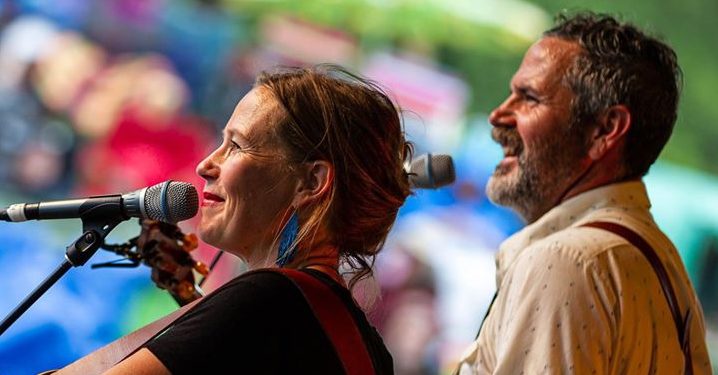 With the publication of the final issue of Penguin Eggs magazine, Canada’s folk community says goodbye to an important resource for the sharing of news, information and artist profiles.

A huge amount of thanks goes to Roddy Campbell and Annamarie Hamilton for their hard work for the past 23 years.

One of the highlights in reading Penguin Eggs has been the yearly “critics poll” to determine the top album of the year.

The survey of radio hosts, music journalists and artistic directors was a valuable tool for anyone interested in the finest new releases from both established and emerging artists.

This year’s final poll named the latest album from Paris and Jason Romero, Bet On Love as the critics’ top choice. In fact, it’s the second time in three years the duo from Horsefly, B.C. has topped the poll. The album has also garnered six Canadian Folk Music Award nominations and was recently nominated for Album of the Year by Folk Alliance International. Their previous release, Sweet Old Religion (2018), won a Juno Award and two CFMAs, while A Wanderer I’ll Stay (2016) was also a Juno Award winner.

I had the opportunity to interview Pharis and Jason at the 2019 Summerfolk Festival in Owen Sound, ON, where we discussed how they juggle life as performers, instrument makers and parents.

And to think it all started with a little folk music matchmaking!

“I lived in Victoria [B.C.] for about 15 years and got to know quite a few people in the old-time music community,” said Pharis. “I eventually came together with a group of people where one of the girls ordered a banjo from this maker in California. Another friend had one of these banjos, and we loved the sound of it. Jason describes it as ‘watermelons rolling down a hill.’ So it’s got that ‘thing’ in it that is so unique, almost woody and underwater – just so mellow and rich. Once the banjo was ordered, Jason checked out the band online and was intrigued by someone in the band photo. He quickly asked a mutual friend [musician Ivan Rosenberg], ‘Who’s that?’ to which Ivan replied, ‘Oh you’ll love Pharis!’ He’s our matchmaker. He talked each of us up to the other while I was in Victoria and Jason was in Arcata, California. I got this email from Jason about a year later out of the blue saying, ‘I’m coming to Victoria. Would you show me around? We have mutual friends.’”

“I used to go fishing in B.C. every summer,” Jason interjected.

“So he took about a 10-hour detour to come and meet me in Victoria”, Pharis said laughing. “We’d never met before but it was really neat. [Ivan] had an inkling we would like each other. I was at an old-time jam, Jason showed up and got a banjo out. I had a fiddle out, and that’s the first thing we ever did. We played music together before we’d even talked. He went away on a fly fishing trip, came back early, and we got married two-and-a-half months later! I always like to quip that I wasn’t even pregnant or anything!”

After a period of time travelling back and forth between California and B.C., Jason moved to Canada and is now a citizen. Making their home in Horsefly in the foothills of the Cariboo Mountains, Jason continues to make his custom-built banjos, while Pharis is in charge of the inlay and graphic design aspects. So how does this couple maintain an active touring schedule (when touring was allowed) and an in-demand business while raising a family?

“That’s the question we ask ourselves every morning,” said Jason. “How do we balance the kids, the banjos [and the touring]. We’re very cautious about what we say yes to and ‘how much we’re gone’ is a big one these days. We’re trying to balance staying home and dealing with a five-year backlog on the banjo side of things, keeping the kids happy, keeping us happy and playing enough to keep our chops up where we want them to be. That didn’t answer [your] question but we’re always asking the question ourselves. I think we’re attempting to answer it the best way we can, which is finding a balance where everyone’s happy. This summer (2019) we did an experiment and [played] a festival every weekend [while] I’m taking time off the banjo shop, so I wouldn’t stress out when I’m not home. It’s been fun. It’s been very tiring. But I’m not sure we’ll do that model again. We’re all pretty tired, and we love where we live. We love Horsefly. It’s a stunning part of the world. We have a garden, and we have pets and there’s swimming everywhere. Like it’s a hard…yah…balance, just balance.”

For Jason, the interest in making banjos goes back to his first days playing one back in California.

“I started [playing] when I was around 19, and like most banjo players, got obsessed with the instrument. When I moved to Arcata, I went back to school for fine woodworking. Then there was a banjo builder who had been there since the 70s [Mark Platin of Wildwood Banjos]. At school I made a banjo in the class, took it to him and started working for him.”

After five years, Jason started to set out on his own, working extra hours making banjos for himself, with the proceeds of sales going towards the purchase of equipment he’d need for his own shop. A friend wanted to learn how to build a website, so he made one for Jason, and soon enough there were six months-worth of orders. The rest, as they say, is history.

“The business has been extremely good to me”, he said. “That’s how I met Pharis. That’s how I moved to Canada. That’s how we bought our house. It’s been a wonderful way to make a living.”

While the matrimonial partnership of Pharis and Jason was a fairly quick one, so too was the songwriting one.

“I’ve written songs for years. Even when I was in university”, Pharis said. “I grew up playing music, but I never thought I would be doing it for a career. I always assumed I’d be doing research on plants or insects up in the north. But I’d take songwriting courses for credit in university from a wonderful teacher [singer-songwriter] Colleen Eccleston. So I was always writing. When Jason and I met, he was just listening to the sounds of the early music. Anything written that was new wasn’t very appealing. I was shifting my folkie tendencies more towards that early old-time, early blues, pre-bluegrass sound in [my] writing and trying to understand what it was that made those songs so interesting.

That’s when Jason and I started writing together, where we could find that common ground down the middle.”

“Pharis is the wordsmith of the family,” Jason added. “I don’t think I’ve written one lyric. I’ve maybe changed a few just because I needed to be able to sing it a little easier. For me, it’s all about sounds. If it doesn’t sound right to my ears then we have to change how it sounds. But the story and the imagery are all Pharis’.”

“It’s an amazing experience having another brain you can completely trust. Working on something and maybe creating it into something completely different than it started,” said Pharis. “But that is the beautiful songwriting process. I understand why people love to write so much with partners.”

One of the songwriting skills Pharis and Jason have developed is the ability to write songs about contemporary life but which sound and feel like old traditional songs.

“That’s from listening,” said Pharis. “We have a great friend named Tom Sauber, who gave Jason advice years ago. He said, ‘When you are getting into music, especially old-time music, listen 95 per cent of the time and play five per cent of the time. It’s so much about the groove and the feeling. It is not about solos. There’s no competitive nature within it at all’. I think both of us really took that advice to heart early on. Because whatever you’re listening to is going to inform what you’re writing, [and] because we listen so intensely to so much of that early music, that’s just naturally where it came in.”

“I’m really proud of the time I’ve spent listening and studying,” added Jason. “I feel like we wear our influences very much on our sleeves when we play these songs.”

For more about Pharis and Jason Romero, check out: www.pharisandjason.com.

Jesse Cook has released a cover of ...