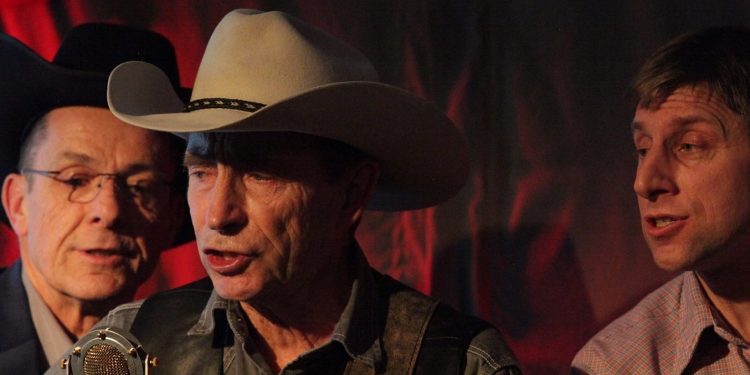 The Wardens isn’t just a cool name for a band. In this case, it’s an actual description of its members.

The trio of national park rangers based in Banff, AB, makes mountain music – both literally and figuratively – marked by beautiful three-part harmonies and lyrics that tell stories you won’t hear anywhere else.

We’re thrilled to premiere their new single, “Coming Home,” from their new album, Sold Out at the Ironwood, which is coming out on Jan. 29.  The song tells the story of Jasper park warden Frank Burstrom, a third generation warden who grew up in a log cabin in Jasper National Park.

“I wrote this song after reflecting on how much the world has changed in my 45-year lifetime and how fast everything continues to change,” said the trio’s Ray Schmidt. ”We have the entire knowledge of the world at our fingertips (who doesn’t love that!) but that forest I played in when I was a kid is now a 7-11 and a PayDay loan.

“I work as a wildlife ranger in Glacier National Park near Revelstoke, BC, and it’s a place, unlike that forest I played in growing up, that we’ve decided as a society not to change (other than melting glaciers, but that’s another story). It got me to thinking about people who are intricately connected with wilderness,” Ray continued. “Frank Burstrom is a fellow that we all worked with as national park wardens. His grandfather and father were also park wardens. His home was the wilderness, and after his 30-year career working in Jasper and Banff national parks, what has changed – and dramatically – is everything else around it. We can send people into orbit any day of the week, but a horse as a mode of transport seems out of this world. Maybe wilderness is that last enduring place that we have.”

Brian Blain writes about the mother he ...