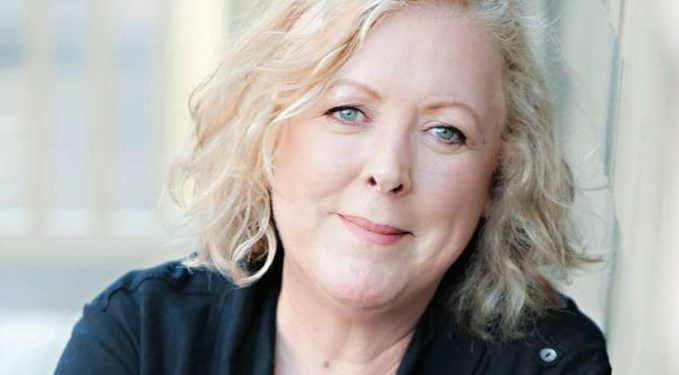 “She was totally ‘in the music’ when she was delivering a song,” said musician and record producer Bill Garrett of Borealis Records.

“She was totally immersed in what she was doing. The emotion she felt during (a) performance translated to the audience, so they were right there with her after one or two songs… They were glued to her. She was in the moment, she totally enjoyed the moment, and she knew she was connecting with an audience. When it’s working, it’s magic, and that’s why she loved her job.”

Bill was talking about singer-songwriter Laura Smith, whose final album, As Long As I’m Dreaming, was recently released on the label. The new album is a compilation of Laura’s best-known songs (the hits that got radio airplay), some early recordings, and her two final songs, recorded just weeks before she passed away from cancer in March of 2020. The compilation was produced by Bill, who explained the original concept for the album.

“We started talking about the project in early 2019,” he said. “We were going to sort of do a “fan favourites” [album], a compilation of some of her most requested songs. Some of them were on older albums and, in some cases, hard to find. That started the process whereby she was going to pick some of her favourites, and she asked Grit Laskin and myself to pick some of our favourites. Paul Mills contributed a couple of favourites as well because he produced her last album (2013’s Everything Is Moving). So it was sort of a group effort, and as this all came together, she was diagnosed. At that point, she didn’t have much time from her diagnosis to the time she passed. So her main pre-occupation was she really wanted to get a couple of songs recorded before it was too late or she didn’t have the energy anymore.”

With the help of some friends, Laura recorded the title song and “On the Road to Glory” at Stonehouse Sound in Mahone Bay, NS. The songs were recorded and mixed by John D.S. Adams and produced by Kim Dunn in January and February of 2020. Bill said the experience of recording Laura’s last two songs was very emotional for Kim.

“I think at times it was heart-wrenching,” he said. “[But also], I know Kim was amazed a lot of the time at the energy she was able to gather to sing. So it became a major labour of love for Kim to get it done. Essentially, what they had after Laura passed, was Laura and a bit of guitar and a bit of piano on the tracks. Adding the bass happened later Adding some strings happened later as well, including Dave Gunning singing harmony. These were all things Laura really wanted. She unfortunately wasn’t there to see the finished product. At that point, I took another look at the project and thought we’re really doing kind of a “life’s work.” So, I started digging around and found there were some tunes from Smales Pace (Cafe) in London, ON from the ‘70s when Laura was living there. As a matter of fact, Laura worked at the cafe.”

An interesting bit of trivia: Laura is the waitress referenced in Stan Rogers’ song “Song Of The Candle.”

“Anyway, there were three or four tunes that we found, and we were able to restore a couple. So that started a process whereby we started finding some other tunes. We found a jazz tune Laura had recorded with Tony Quarrington, Margaret Stowe and Neil Swainson, and it was terrific! The bottom line was we ended up with 18 songs that sort of mirrored her musical life. There were some demo sessions she had done in Toronto in the late ‘70s (or) early ‘80s. There were tunes she had done in the early ‘90s and her last album. So, it’s kind of chronological, and it finishes with the last two she recorded in Mahone Bay.”

During her career, Laura had the opportunity to perform in a variety of styles and venues, from coffeehouses to musical theatre. She played the role of Marilla during two seasons of the musical “Anne & Gilbert” in Prince Edward Island in the mid 2000’s.

“I wasn’t surprised she could sing a jazz standard (“If I Were A Bell”) and deliver it so well because I’ve heard her sing enough times,” said Bill. “She had the pipes to do that. I suspect she could have done all sorts of styles, but it was a real discovery, ‘cause I had no idea she had done that session with Margaret, Neil and Tony. She pulls the song off really, really well.”

While initially the project was primarily for her fans, Bill said, after Laura’s cancer diagnosis, it became more of a project for herself.

“That’s why we added the poetry and the writings she’d done over the years. When she was writing these pieces, she usually addressed “Meredith,” which was her pet name for herself. It’s sort of like a diary. We coupled it with a bunch of her drawings. She was the complete artist, so it was really great to put the whole thing together.”

The finished product is larger than what Borealis Records is used to releasing, with 50 pages of lyrics, poetry and drawings.

“There wasn’t a point where we questioned ourselves about the process” Bill said. “We had to charge a little more for the album, only to cover off the cost of making the thing. But we never questioned what we were doing and the validity of presenting, not only this music, but a lot of her life and showing people what a great artist she was.”

To find out more about As Long As I’m Dreaming, go to www.borealisrecords.com.