How the Dardanelles got members from 3 cities together to make a record … about logging? 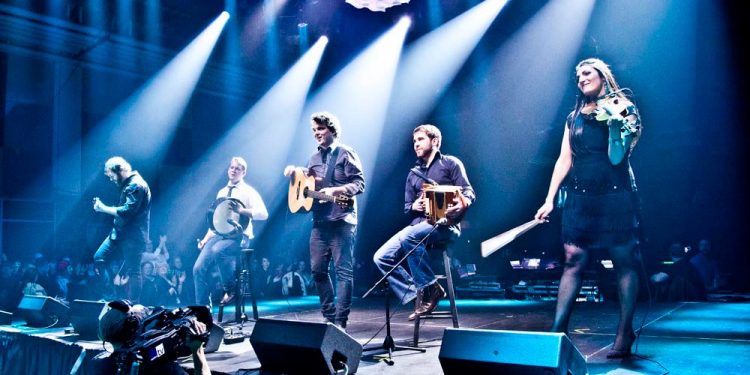 Coordinating the schedule of a five-piece band so they can rehearse and record a new album can be a logistical challenge at the best of times. But when three members live in St. John’s, NL and are busy with other projects, a fourth member is a doctor in the nation’s capital, and the fifth lives in Toronto, where he hosts a national radio show, it would seem to be almost impossible. But as Matthew Byrne of the Dardanelles explained, it wasn’t that difficult to record In The Spring, That’s The Time.

“We started talking about a new record, and then we kind of stopped talking about it, because we know people were like, ‘Yeah, whatever. You’re just saying that,” he said, laughing. “It did take a while to come together. There was a bit of a time when we weren’t doing a whole lot because Tom [Power] got really really busy as the host of q [on CBC Radio], Emilia [Bartellas], our fiddle player, moved to Ottawa to be a doctor, Rich Klaas, our bodhran player, works with Parks Canada, Aaron Collis, our accordion player, teaches music and is in a couple of other bands that are quite busy, and I’ve been busy with the solo thing.”

“There was a whole lot of life happening, and it was happening over the course of a few years”, he said. “We always kept playing music and making the opportunity to get together and play, but the idea of getting another record happening was a bit elusive for a few years.”

What the band members soon realized was that releasing a new album was just as important to them as it was to their fans, he said.

“We said we wanted to do this for ourselves, for the band relationship, which is still so strong, and we’re five really good friends,” Matthew said. “The main drive for it was we had an album’s worth of material that we really wanted to record. Tom really buckled down to get the ball rolling. He was the one who got in touch with John Doyle, the producer, and Don Ellis, the engineer. We wanted to have the same team [as on the previous album, The Eastern Light].

Once the Dardanelles figured out when they’d all be available to record, they had to check if John and Don’s schedules were free,” he added.

“It was just a whole lot of fartin’ around just to try and get it in the calendar,” Matthew said. “But we got it in for October of last year and, man oh man, it was such a gratifying thing to accomplish. Not just making the record but actually planning the record and booking time off. It was such a feat in and of itself.”

The Dardanelles repertoire is a mix of traditional Newfoundland songs and tunes along with more contemporary material and their original tunes. A nine-year span between albums can mean quite a list of potential material to wade through. For the most part, The Dardanelles rely on Emilia and Aaron for sourcing the tunes.

Not a maritime record

“There was a lot of Newfoundland tunes they had collected in that time,” Matthew explained. “There was also stuff they had written themselves. That’s one of the things I really love about the [new] album. It’s a lot of Newfoundland material, but there’s also some compositions by them, [which] means they’re adding to that body of tunes. There was also stuff that we had been playing at our live shows that we had come to love [where] five or six years ago we would have thought, ‘No, we won’t record that,’ but then we came to love it and own it so much. ‘The Badger Drive’ is a song we’ve played for years but it was only in the last couple of years we were [saying], ‘We should really record this version.’ We’ve been playing it long enough now, we’ve almost taken ownership of this song!”

Newfoundland and Labrador are well-known for their history of fishing. What In the Spring, That’s the Time does is shine a spotlight on its logging industry with “The Badger Drive” and “Double Sledder Lad.”

“It’s a bit more of a ‘landed’ record than the stuff we’ve done in the past,” Matthew said. “The last record was a very seafaring record, and a lot of the stuff I’ve done [in my solo career] leans heavily towards sea songs and Maritime music. It’s not that any of us have any attachment to logging, but these songs ended up encouraging us to take an interest in some aspect of Newfoundland work and labour history we never really knew about before. Songs are often like windows into understanding about people’s experiences in work and labour and love and whatever. We’ve learned a lot from those logging songs! There’s a lot of terminology that gives us a sense of something [that] never had anything to do with ourselves. But I kind of like that it’s a ‘Newfoundland’ record through and through, but it’s not yet another ‘Maritime’ record. There’s an awful lot of this out there, and sometimes it can get in the way of other themes that exist in a song.”

Getting back to the difficulties of a far-flung quintet getting together to rehearse and perform, Matthew said it really hasn’t been that daunting.

“Under normal circumstances, I’m travelling to the mainland very often and so are Rich and Aaron, even though the three of us are based in St. John’s. It’s not that uncommon for four of us to be there, so we’ll say, ‘Matthew, or Rich, we’re gonna fly you up that weekend and have a couple of days to rehearse.’ It ended up not being as complicated as we originally thought it would be. I remember when Tom moved to Toronto, we were kind of thinking, ‘Oh God, this is really going to put a real kink in things!’ But it ended up being not that bad because sometimes it’s easier to go to Toronto than it is to come here. The main coming together that laid the bedrock for the album was when we all went to Ottawa and said, ‘OK, were going to flesh out what material is going on this record and nail down the 10 to 12 pieces of music’ with seven or eight of them already pretty much decided. So we rented a cabin in the woods in Chelsea, QC and spent 72 hours cooped up with our instruments and basically fleshed out the record, made lists and demoed stuff on iPhones, made notes of keys, wrote little parts and exchanged parts. That was the weekend that formed the beginning of the record, where we said to each other, ‘This will determine whether this record’s gonna happen, or I don’t think it’s there.’ We really got excited about what we had to put together! Then it was just the logistics of getting [everyone] involved together in a room [to record the album].”

The various restrictions imposed by COVID-19 have not only affected touring musicians but also one of their main outlets for selling their music, the local record shop. To that end, the Dardanelles are doing their bit to support Fred’s Records in St. John’s.

“Fred’s Records is one of the last standing real proper record stores, and they are such a massive support of all the Newfoundland entertainment that gets put on CD,” said Matthew. “They’ve been huge for us over the years, and all of the Newfoundland artists that tour abroad. So many of the tourists, when they go into Fred’s and say, ‘What should I get?’ God love the boys at Fred’s for pointing towards people like the Dardanelles, the Ennis Sisters, Rum Ragged, Amelia Curran – all these amazing people who Fred’s has really gotten behind. So we kind of said, in light of everything that’s going on, let’s make sure these record stores see if they can manage to get through these difficult times. So we’ve been pointing people that way. Not just the foot traffic that goes in and buys the CDs physically but also online. You can order it, and they ship all over the world. So instead of us sending them out from ourselves, go to Fred’s! You can do the same online, with O’Brien’s Music in St. John’s. We’ve been pointing people towards [Fred’s and O’Brien’s] because they need the help as much as anybody right now too.”

A video slide show of the Roots ...

Gordy the Moose’s 11 favourite discoveries of ...