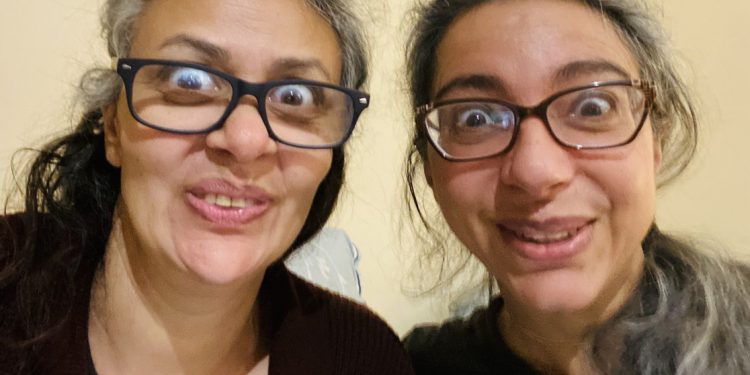 Maryem has also shared a fantastic holiday recipe with us that we’re featuring in a separate article here.

Upon learning that many popular Christmas tunes were written by Jewish composers, Roula decided that the two women, who have been great friends and musical co-conspirators for years, should create their own homage to the holiday classics.  The song, with its goofy spoken word intro done in accents and its obligatory reference to Toronto landmark Honest Ed’s, has become something of a hit.

Outside of FAOC, Maryem and Roula are respected artists in the Canadian world music scene.

Roula co-leads the funked up Arabic-Roma band Nomadica and creates music for dance performances and theatre. She appears in Atom Egoyan’s latest film, Guest of Honour, and Ruba Nadda’s popular Sabah: A Love Story. She also runs Om Laila Studio, where she has been teaching and performing Arab dance for more than 25 years.

Maryem’s voice has been heard on the theme of CBC’s Little Mosque on the Prairie and A.R. Rahman’s Bollywood hit, Mayya Mayya. She was the featured vocalist in Tafelmusik’s production of Tales of Two Cities: The Leipzig-Damascus Coffee Houses. She performed Christos Hatzis’ pieces Syn-Phonia and Constantinople, and she’s performed in numerous Toronto musical groups including Al Qahwa, Turkwaz, and the Juno-nominated Maza Meze.  Maryem won the inaugural 2019 Johanna Metcalf Prize for Performing Arts.

Maryem’s other talents include cooking a mean molokheyya soup, so we’re super stoked that she answered our call to share a favourite holiday recipe with us.  You can find that recipe here